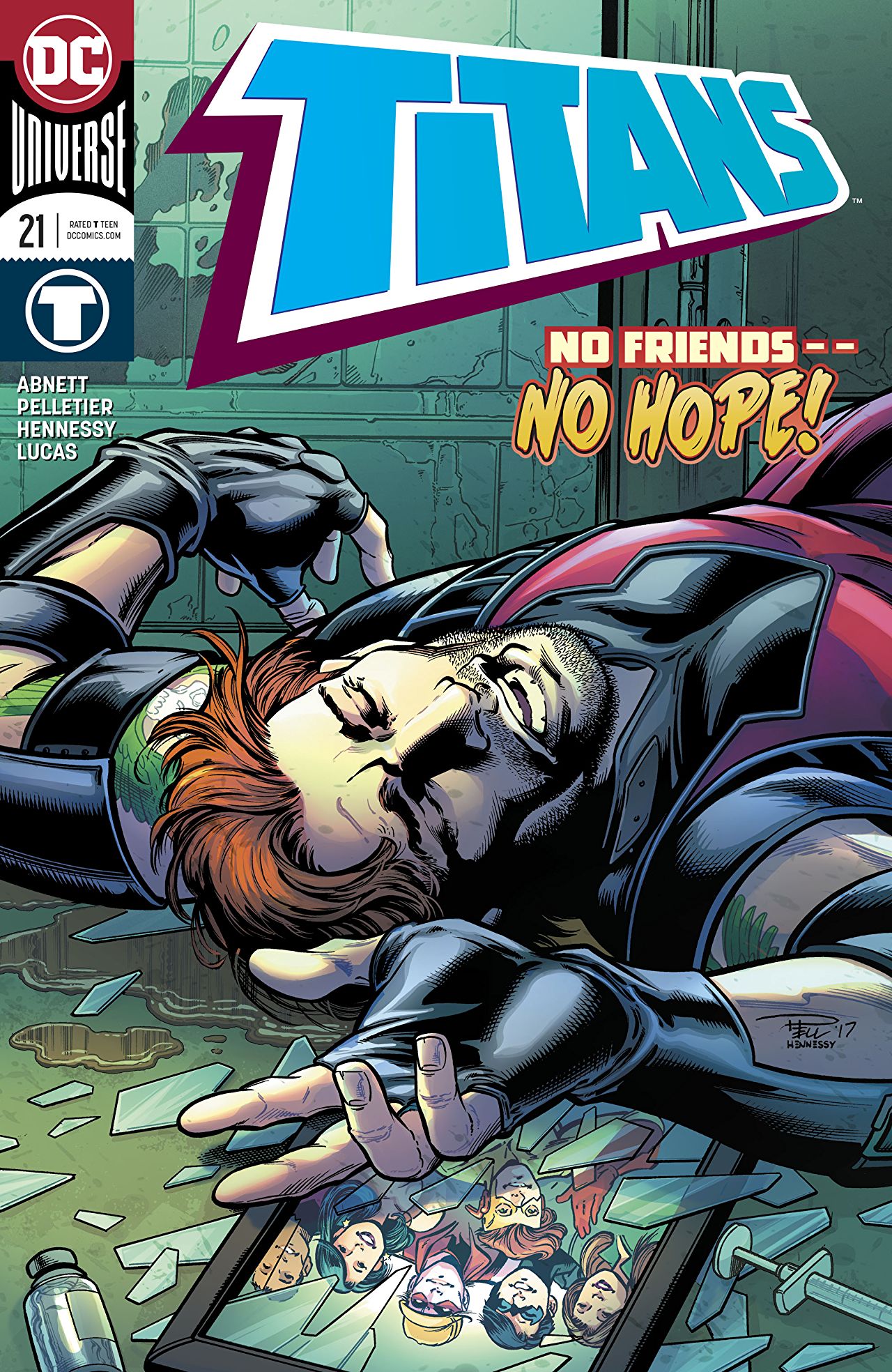 Overview: As the Brotherhood of Evil plots world domination, the Titans try to deal with the issue they have at hand: their own friendships falling apart.

Synopsis (spoilers ahead): Somewhere in New York, Mallah and the Brain are discussing how to restore his brain-ness to full power. This way, they believe, people will start taking them seriously. Mallah succeeds in working the improvement to the Brain, but the leader of the Brotherhood of Evil seems to be once more lost to his narcissistic impulses.

Roy, in another part of the Big Apple, is calling Donna to talk about his insights coming from working with Cheshire. He admits he has screwed up badly, and that the League might have to get involved, but he has no concrete proof of the threat he’s found unless he admits having spent the night with her. He continues omitting it but lets it slip that he was under the effect of drugs when he saw what was going to happen. After the conversation, Donna enlists Batman and Wonder Woman to help investigate the possible threat, but nothing is found.

Back with the Brotherhood, the Brain reveals to Mallah that he is using an algorithm to mask their actions. He’s also solved an unsolvable puzzle. And he now knows how to control the climate.

Donna, worried about Roy, contacts Dick to intervene for her. He enlists Wally and together they break into Roy’s place. They take in the messy state of the apartment and believe Roy is slipping under. Roy gets home to find Dick and Wally standing in his living room, and he doesn’t take it well.

Analysis: Titans is, at the moment, a perfect display of what can be achieved with a team book when group conflict and villainous threats are put in balance. Dan Abnett has been constructing the conflict bit by bit, pushing the characters right to the edge before going for the final push. This issue might well be it. Those edges, they are all different, and their outline has been drawn in the previous issue.

The conflict is not only being built inside the Titans, but there is a hint of it even inside the Brotherhood of Evil. For how it is being built, the final resolution for this story-arc might well be more than just hero faces villain. As of now, the one conflict that has reached its culmination was the tension between Roy and Dick after the dissolution of the team. It comes in an extremely well executed indoors fight scene. Gritty and emotional both in art and writing.

When caught in a feud with loved ones people will usually be at their nastiest, meanest mindset. As it is, Roy is no exception. He uses the deep understanding he has of his friends to hit back at them after he feels like he’s been attacked – the attack, in this case, is their utter lack of trust in him. The taking down of Wally is a given, but what Abnett came up for Dick shows that he does understand the first Robin better than what his usual reluctance to write the characters lets show.

“In my hands, anything can become a weapon” is what Roy thinks as he faces Dick, whom, he acknowledges, is a better hand-to-hand fighter than him. The plot twist here is that the weapon he goes for is not physical at all. And indeed, he goes for one kind of weapon that I can’t see Dick Grayson ever using against his friends: emotional manipulation. And, with one little choice, Paul Pelletier adds even more emotion to this scene. In one panel, he lets Nightwing’s eyes show through his mask.

Final Thoughts: After carefully placing his pieces in a perfect composition for collision, Dan Abnett strikes and leaves a beautiful chaos behind. In a storyline driven by internal and interpersonal conflict, Paul Pelletier’s expressive style could not be a better fit.