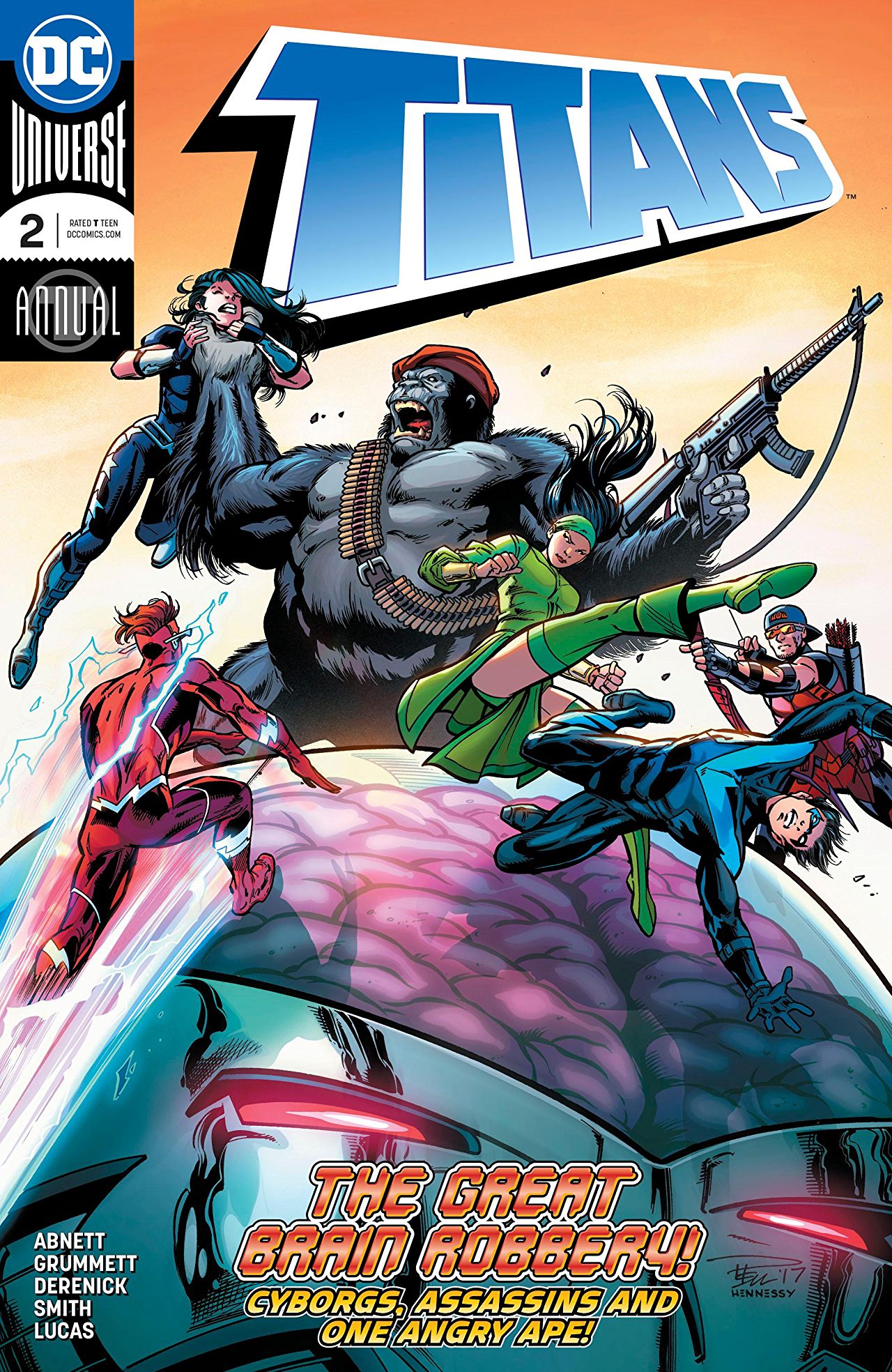 Overview: The Titans, in order to overcome a world-threatening enemy with only one thought on its mind, will have to put aside their differences and unite as a team.

Synopsis (spoilers ahead): The Brain and Monsieur Mallah are manipulating weather patterns across planet Earth. Each weather disaster contains a separate trap inside designed to best each member of the Justice League. Unfortunately for Mallah, the Brain’s machinations and higher order thinking seem to have separated the two and pushed the Brain to forget about simple interpersonal interactions. Mallah feels that they are drifting apart!

With the Justice League otherwise engaged, Roy Harper and Donna Troy have taken it upon themselves to stop the Brain’s terrorist attack. As they fight, Roy and Donna inwardly lament that they each feel they deserve the blame for the situation they are in which may ultimately cost them their lives.

As the battle continues, they both begin to blurt out their unprofessed love. Suddenly there is an interruption as Nightwing and Wally West both appear. Nightwing reveals they had been tracking Arsenal and that the two erstwhile members of the Titans owe Roy a major apology for ignoring his warning about the Brain’s imminent attack. Roy may or may not be ready to talk, however.

Back in the terrorist ready-room, the Brain reveals to Mallah that his cognitive perception is now at an all-time high. He can now see the shape of the entire universe. Mallah asks him to describe it, but the Brain retorts that he wouldn’t understand because he simply isn’t smart enough. Mallah reminds him that he has promised to increase his intellectual capacity as well and that soon enough he will be able to see the secrets of the universe along with his partner. Brain says that he will get to it when he has time but at the moment he has more important things to do. He dismisses Monsieur Mallah to clean up the insolent human intruders and cease boring and bothering him with such mundane details. Brain further reveals that he needs only nine more minutes until he reaches one-hundred percent cognition efficiency and becomes invulnerable, transcending the hardware limitations of “this damned metal box.”

Meanwhile, the heroes continue to advance through the “substrate defenses,” robotic skull-shaped minions in their path. Roy Harper isn’t much closer to trusting Nightwing or accepting his apology than he was when they first arrived. Nightwing ruefully submits a formal apology, and immediately qualifies it reminding Harper that he was right about this and “wrong about all that other crap.” Eventually, the two obstinate teammates are able to come to the agreement that right here and now is about the Titans, not (as Roy first insinuated) about proving anything to any other team like the Justice League. No sooner do they bury the hatchet than Monsieur Mallah appears from the rafters laying down a barrage of cannon fire.

After Nightwing drops a few puns from the Batman ’66 era, the heroes are able to subdue the evolved primate. Confused, Mallah cries into his communicator trying to reach Brain who had promised to back up his attack with substrate support and more power to his laser. But as he examines his communicator, he realizes what has happened; Brain has now reached 98% capacity and appears to have evolved past the restraints of the organic world – and the relationships he had there. The heroes want to interrogate him, but Mallah is physically and emotionally defeated, realizing the love of his life is lost to him.

But something interesting happens as the heroes rally without Mallah’s help and prepare to face Brain anyways. Mallah is moved by their perseverance and camaraderie. He admits that saving his friend, in this case, means stopping him and he agrees to help the Titans.

Making their way towards Brain’s lair, Mallah villain-‘splains the situation that gave rise to their current predicament. Tired of constantly having their plans unraveled by the likes of the Justice League and other heroes, Brain came to the conclusion that he could elevate his conscious to become the most intelligent being in the universe. Together with Mallah, they created a new drug called Bliss. Interacting with the user’s brain, Bliss allowed Brain to expand his consciousness and make the users minds his own for developing his cognitive abilities. But as he expanded across a huge new medium for his mind, consequences were revealed. For the same reason that humans don’t “interact” with bacteria, Brain was talking less and less with Mallah, until now he had ceased all communications. Roy isn’t very sympathetic, but Wally realizes the problem is much greater than the loss of Mallah’s relationship, as Brain will likely gain the powers that would most easily be referred to as God-like. But Mallah explains that he still has a weakness; until he reaches 100% of his possible cognition, he will still be reliant on the physical housing. Mallah agrees to take the Titans to Brain as long as they won’t hurt him. Poor Mallah, he simply wants his friend back.

Just as the team reaches the Brain’s hideout, conditions become precarious as the building is racked by what appears to be an earthquake. Unfortunately, it’s much worse. Wally’s connection to the Speed Force allows him to see the time stream as well, and he senses that Brain has taken control of all four dimensions. He is literally rearranging reality.

Mallah makes a last-ditch effort to communicate to his former partner. He is past trying to stop or save him and simply tries to communicate that he will miss him. In the confusion, we can see on his tablet that Brain hasn’t quite reached 100% cognition. The Brain examines Mallah’s statements and determines that they do not contribute to his efficiency. It’s just enough time to give Roy Harper the opportunity to line up a shot with a trick arrow. With a tremendous explosion, everything goes white…

Around the planet, the Leaguers are checking in. Each of the mysterious storms abated as quickly as they appeared. No one seems to have an explanation, but Batman alone seems disturbed with the understanding that someone must have intervened.

Back in New York, the dust settles and the Titans have emerged victorious. Brain’s advancement came to a halt and while he hasn’t been destroyed, the threat has been deterred. Monsieur Mallah clutches Brain’s housing, reassuring him that he will take care of him now. If Brain could talk….well, one assumes that it is best he can’t right now.

Despite their quarrel, Nightwing admits that Roy Harper’s expert shot ultimately saved the day. Roy just as quickly redistributes credit to the whole team. Nightwing, looking forlorn, announces that its time he told Batman that the Titans handled the situation, admitting the team has been active behind his back. But Donna steps up to fill her role as leader, relieving Nightwing of the responsibility. For a team that had so recently teetered on the brink, it’s a successful mission both literally and figuratively.

Analysis: This is a team that sorely needed a win and the premise that brings them together isn’t necessarily as important as the fact that they got there. This group has been under siege since before anyone can remember (quite literally, as the events of the last several years from The Hunt onward actually conspired to write the Titans out of the history books) so it feels like you can mark one up for the good guys since this book ends with the Titans coming out of the shadows more or less together. They deserve it.

That said, the premise of this book feels pretty shaky. It’s a tough- and familiar- sell when you take the Justice League out of the picture as a plot device for keeping the team from relying on them. The relationship beats for the characters are all played pretty well though. Even the “left behind via ascension” motif between Mallah and Brain is an interesting card, particularly as expressed through a disembodied cerebellum and an overly developed ape.

The best thing that the two pencil artists have going for them is that the continuity isn’t disturbed transitioning from one to the other. But in a story that’s a little bit lacking in creativity and relies pretty heavily on tropes, that’s also their problem; nothing about this art is memorable or striking. The backgrounds, in particular, are very bland. There’s nothing really wrong with the figure drawing or action sequences, but as with most of this book the art seems to say nothing so much as “are we there yet, No Justice?”

Final Thoughts: The Titans are great characters and they each deserve (and usually get) better treatment than to just tie off the era with such a snooze-fest. Ultimately this is the group that defines the future of the Justice League, so we can look forward to the opportunity to paint them with a better brush in the post-No Justice landscape.