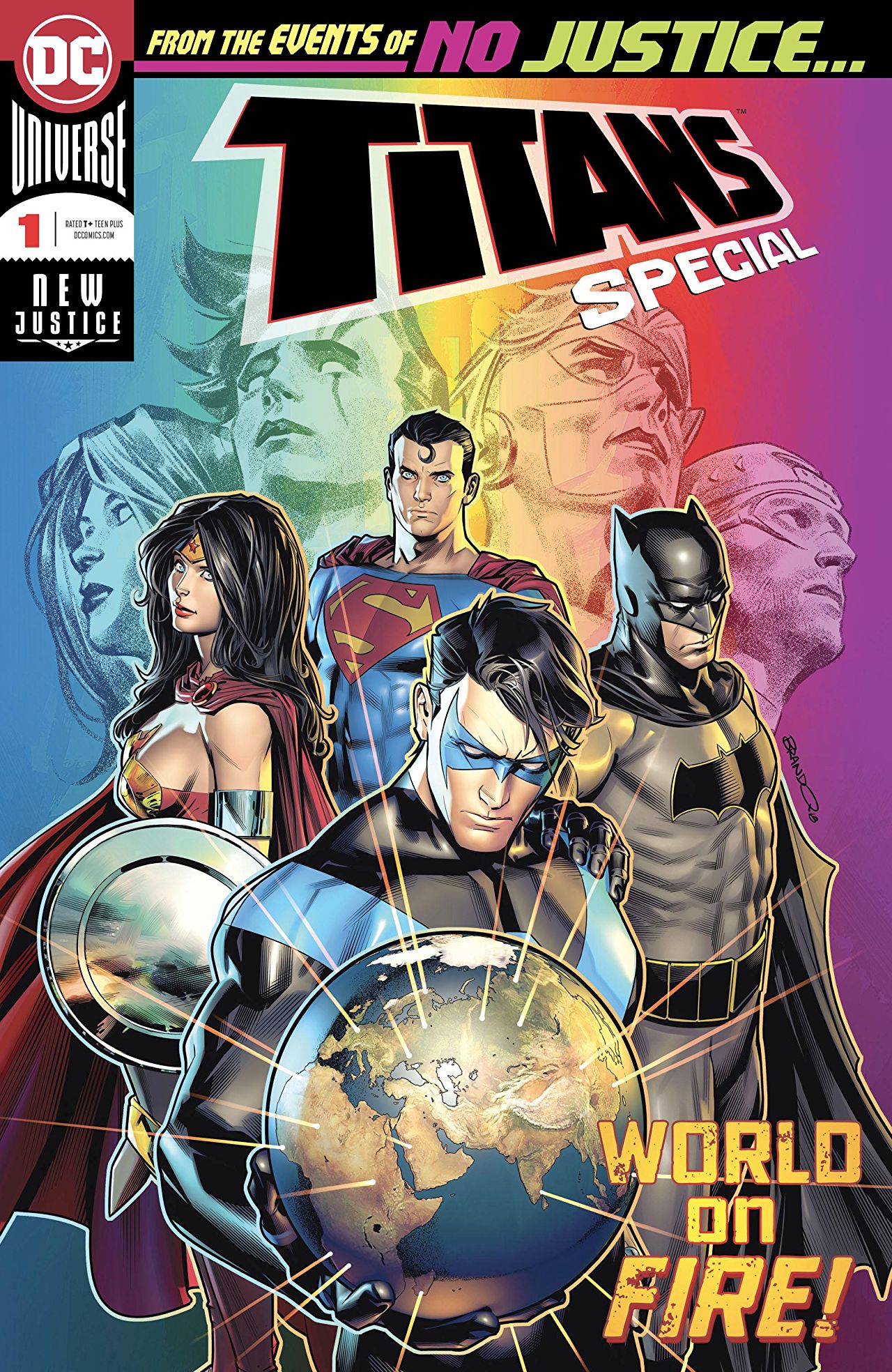 Overview: Dick recruits a new Titans team and uses all thirty-seven pages to do so.

Synopsis (spoilers ahead): Dick is narrating something that happened the other day as we see the events unfolded on the page. He was chasing a woman on a subway train. She had just manifested some powers due to the destruction of the Source Wall. She was scared, but Dick didn’t know that. She jumped right in front of an oncoming train.

He now stands in front of the Justice League, to tell them that he is going to create a new team to help these people. He’s not asking permission. Martian Manhunter begins building a team for Dick, but he already has a team in mind.

In the Arizona desert, Raven is battling a demon-possessed trucker in the astral plane. She almost loses the battle, when Dick shows up and knocks the trucker’s body in the back of the head. Dick asks her to join the team. He needs an empath on the team so he doesn’t misread someone’s state of mind and risk their life again. She agrees to join. A glowing red-eyed figure watches from a nearby canyon.

In Hollywood, Beast Boy is grocery shopping. A little girl notices that he is green, and then her mother recognizes him as one of the Teen Titans. She asks for a picture and asks him to turn into something, bringing more attention to a guy who doesn’t want attention. He lashes out at her, involuntarily transforming into a monster. He sees that he’s scared them, and bursts out the wall, where Nightwing is waiting for him. He tells him they are looking for a way to help people who can no longer control their powers because of the destruction of the Source Wall. He wants to help Gar regain control, and in the meantime, he can sympathize with the people they will be coming into contact with. Gar agrees, and they settle an agreement with the police who showed up because of the ruckus. A glowing red-eyed figure watches from a nearby rooftop.

Now in New York, Dick tries to convince Donna Troy to join. After the fallout of the Titans, she’s not feeling it. After using some of that Grayson charm, he convinced her to join his still-in-process team. A glowing-red-eyed figure watches from a window.

A young woman version of Steel is working in Metropolis. She captures a version of Parasite. A glowing red-eyed figure watches from an alleyway. She goes to her lair, where Nightwing and the rest of the team show up to recruit her. It works. She’s a genius.

They head to D.C. – where they have a section of the Hall of Justice to themselves. Steel sets up her tech when the parasite is reacting to the locket that Nightwing has. It grows into a monster, but before it can wreck the building, Miss Martian shows up and blows the thing away. She’s been designated to the team to babysit under the orders of Martian Manhunter, and since she can read minds she’ll make the perfect informant. She also admits to observing the recruitment process. Dick isn’t happy but the team moves on anyway.

Meanwhile, Brother Blood is excited about the coming apocalypse on multiple worlds, as he can feel it through his connection to the Red.

Analysis: Dan Abnett writes the script here… I’m not feeling it. I’m sorry, but this was pretty weak. It does a poor job establishing the characters, and also characterizes some very differently than they are portrayed elsewhere (I’m looking at you Martian Manhunter). The story… Well there isn’t much of one. The whole issue is building the team. We get a few pages of Dick trying to convince a new member to join, and then they do… I’m sorry, but that’s just not an interesting read. Especially when you keep referencing part issues of this series that I haven’t read. This is supposed to be a jumping-on point and it’s not like it was your average twenty-page book. This was nearly double in size. Let’s really stretch that page count. See how long we can drag this out, eh?

A crap-ton of artists and colorists work on this book. Seriously, it’s more than I’ve ever seen on one single issue. Wait, I just counted. There are exactly half a dozen different artists and an equal number of colorists. Thankfully they hold an entire scene with one artist in most cases, but it’s as all over the place as you’d expect. I have no way of knowing who did what, other than just being familiar with their work. The art for Beast Boy’s scene was pretty rough. Nicola Scott did the Donna Troy scene, and that looked pretty great for the most part, other than Donna’s mopey face. It was a little too mopey. It kinda made me laugh. Dave Sharpe letters and does a fine job keeping everything in place.

Final Thoughts: An extremely weak first issue. Hopefully the series will pick up with the next installment. I like the premise of the book, but I don’t know how I feel about the team in general. I have mixed feelings on the different characters involved. I mean, I’d like to see Kory on the team instead of Steel.