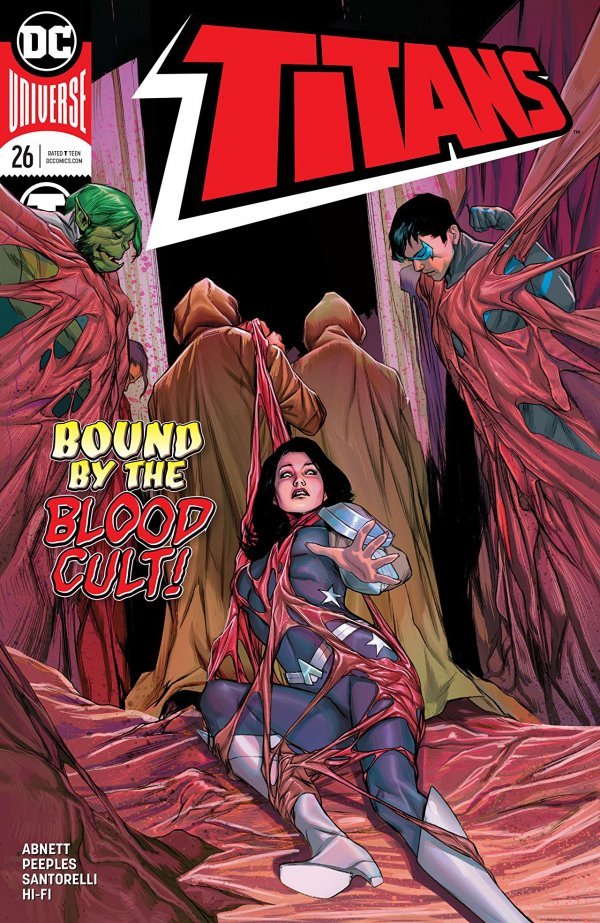 Overview: The Titans travel to Norway where they are attacked by the Blood Cult.

Synopsis (spoilers ahead): Donna Troy takes a swig from a bottle and walks into the Titans Boom Room and heads out with Nightwing, Miss Martian, and Beast Boy to a trouble alert in Norway while Steel, the still compromised Raven, and their new civilian technical advisor, Ben Rubel stay behind to monitor the mission and work on a device to deplete the source energy which would restore the strange events the team has been going off to correct back to normal.

The team in Norway find themselves under attack by a pack of creatures made out of blood.  The blood creatures put Miss Martian through a wall and take her out of the fight and Nightwing calls for Steel who boom-tubes into the fight.  Miss Martian wakes up and is disturbed by the anger she senses from the creatures and loses control of her form, momentarily revealing her true form as a White Martian before gaining control again.  Nightwing and Donna run to Miss Martian’s aide, who explains that someone is using the source energy to construct these creatures.

The blood creatures begin to overrun the team until Ben activates the device and the creatures dissipate into pools of blood.  The team then finds that the people who lived in this area were ritualistically murdered and their blood was used to create the creatures that attack them and the team realize the Blood Cult is behind the creatures.

Back at the Hall of Justice, the team plots their next move.  The issue ends with Ben Rubel revealing to Miss Martian that he saw what she really is.

Analysis: There isn’t a lot to get into with this issue.  The Titans go to Norway.  They get attacked by monsters and that’s pretty much it.  Don’t get me wrong.  I was entertained by the attack of the blood monsters.  I thought it was a pretty inventive way to let the team know that they are going to have to face off against the Blood Cult. But don’t they already know that from the end of the last issue? Why aren’t they going after the Blood Cult? Or maybe track down Raven’s missing soul self.  The creative team has taken the time to establish a few things that the team should be focused on, but instead, they go off to yet another Trouble Alert, which in this case features one of the threats that they should be actively looking for.

I’d like to preface this by saying that Scott Snyder’s run on Justice League is the best the title has been in years, and the cosmic broken Source Wall stuff works well in that title.  I’m not sure that the concept translates to this title.  It seems overly complicated and it gets irritating that the book needs to constantly explain its mission statement every single issue.

I also think that writer Dan Abnett is still struggling to get a handle on these characters.  Nightwing continues to be weirdly unconfident and pessimistic, which doesn’t jive with a character who’s supposed to be a natural leader who’s been fighting criminals and supervillains for years.  The biggest problem continues to be Miss Martian, which is a shame because I love her inclusion on the team.  After putting to bed the no reason clashes between M’gann and Nightwing, Abnett is taking the character down the path of hiding her true appearance from her teammate.  This is a subplot that we’ve seen so many times before, both in comics, animation and live action, that it feels like a bad cover version of something that has been executed better elsewhere and I’m just not interested in this book going down that road.

I enjoyed Brent Peeples’ art in this issue.   I think that the sequences involving the blood creatures were well executed and as someone who grew up with action figures such as “Arctic Blast Batman”, I couldn’t hep but appreciate the winter versions of Donna Troy and Nightwing’s costumes.

Final Thoughts: I like a lot of elements of this book but it still seems to be floundering.  Change might be coming though.  It still remains to be seen how the series is going to be handing the new status quo that Nightwing is going to be going through over the next few months.