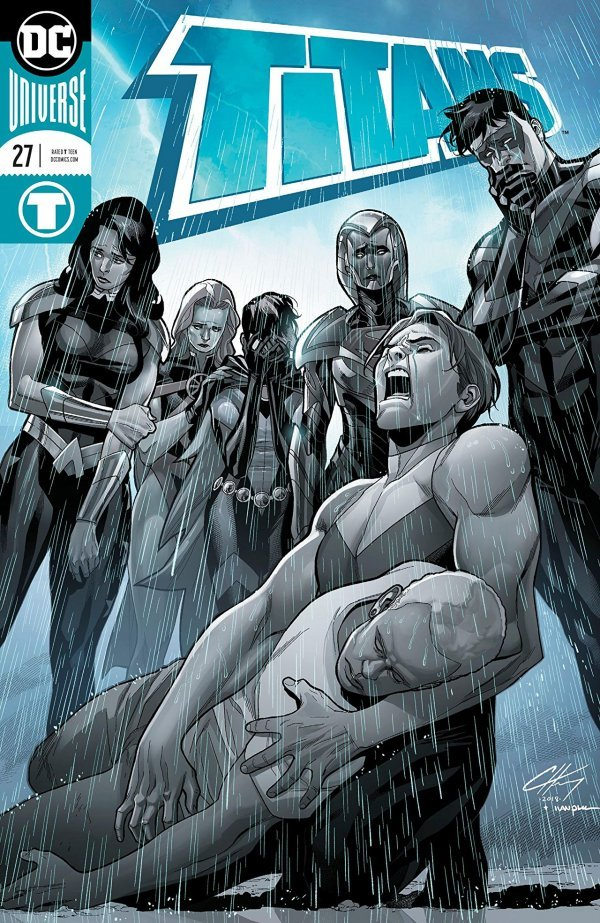 Overview: The Titans cope with loss when one of their own is critically injured.

Synopsis (spoilers ahead): The story opens with Donna Troy leaving a rose at Roy Harper’s grave (as seen in Heroes in Crisis #1).  At the Hall of Justice, Beast Boy joins the others to learn from Miss Martian that Nightwing has been shot in the head and is in critical condition (See Batman #55).  Raven tells the group that if Nightwing survives he won’t be the same, only to have Donna Troy dismiss Raven’s words and change the subject.  Beast Boy tells the group that Tyler Bains, the young man that was the focus of the first Source Energy event that has been in a coma since Titans #23 is dying, with his body shutting down because of his exposure to the Source Energy.

Raven finds Donna downing shots of tequila and lectures her not to dull sense of grief, with Raven pointing out that she can’t feel anything since her Soul-Self went missing.  Steel and Beast Boy talk on the roof of the Hall of Justice and Beast Boy admits that he feels selfish for being worried that Tyler Bains’ deteriorating condition may mean that he will have a similar fate.

Analysis: I’ve always liked quiet character issues in between story arcs in titles like this.  For instance, X-Men comics in the 80’s and 90’s were always particularly good at having issues where the characters would be reeling from a loss and would talk things out before some new threat attacked.  While I can see what they were going for, I think that writer Dan Abnett fails to make this issue resonate in the way that I think he intended.  Part of the problem is the multiple points of grief that the story has to address.  I can’t help but wonder if this issue suffers from bad timing and has to address two major events in other comics, the death of Roy Harper and Dick Grayson being shot in the head.  Roy Harper’s death in this issue is so quickly brushed aside that the event feels like a complete afterthought and I think if they weren’t going to take the time to address the death of a character with major ties to the Titans then they shouldn’t have mentioned it at all.

The story quickly turns its focus to the team reacting to their leader’s critical injury.  And while I applauded the attempt, it doesn’t quite succeed in what it was going for.  Donna is trying to dull her emotions with alcohol, but instead of addressing it properly as the problem it should be, its waived away after a contrived conversation with Raven, which is another problem.  Especially in an issue full of human tragedy, Raven being dead to emotions should be a big storyline.  Donna’s drinking should be a big problem.  Instead, the story pays lip service to both and has the team focus on an incidental character that has no bearing on this book at all. The book hasn’t given me any reason to care about the death of Tyler Bains and in a book that has members of the team struggling with serious personal issues in the face of tragedy, to focus on Tyler’s coma feels like a waste of everyone’s time.

There’s also the matter of the last issue’s set up of the Blood Cult being forgotten in this issue.  Isn’t this a problem that should at least be mentioned as the Titans try to deal with everything else on their plate?  It makes me wonder if events of this issue were late in the game curveball that this creative team has had to contend with.

I did like Miss Martian admitting to not knowing what to do in this situation and if this whole Nightwing storyline has a silver lining, I like the idea of Miss Martian stepping up and truly becoming a part of this team. I could have done without another passively bigoted comment from Ben about Miss Martian being a monster.  I don’t know where this plotline is going but it continues to feel weird that this character, in light of everything else that he is seeing, would draw the line at taking issue at Miss Martian’s true from.

Brent Peeples’s art does what is asked and his character work is fine.  I find that there isn’t a lot of care put into his background and there is a lot of empty space in the backgrounds that make the book feel incomplete.

Final Thoughts: Team books are all about how the characters interact with one another, and with a team with as much history as the Titans, I want the book to take the time to tell smaller stories like this.  I also want the book to just be better then what’s presented here.