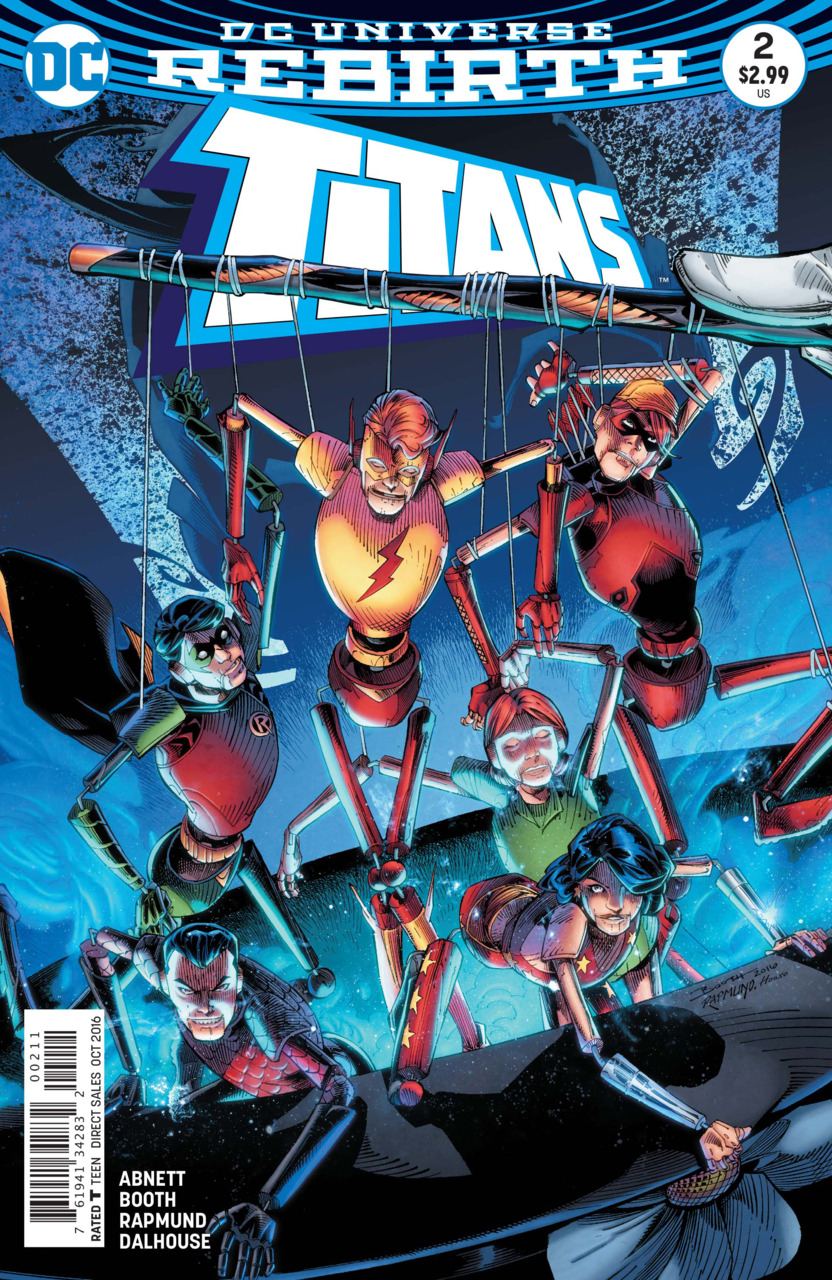 “The Return of Wally West Part Two: Smoke and Mirrors” opens in Keystone City. Linda Park of Super News arrives at a news story. The cop there says that some guys appeared out of thin air and are just standing around. It is revealed that the guys are actually the original Teen Titans: Robin, Wonder Girl, Aqualad, Speedy, Lilith and Kid Flash. She suddenly recognizes Kid Flash as the man that approached her before, Wally West. She breaks the police barrier and approaches the Titans. This Wally does not remember Linda or anything for that matter, it was like they were just born. Robin says that “they” are coming and it is time to go. Immediately the Teen Titans go crazy and start attacking the city.

We see that Abra Kadabra is behind the appearance of these Titans. He conjured up magical reproductions of the original Titans to test the real Titans to their limits. He blames Wally for turning him into a nobody and taking everything from him. Now he will make him pay. Now he looks for a volunteer in the audience as the real Titans arrive.

The Titans move in to take down their doppelgängers. Nightwing tries to clear the street but is blindsided by Aqualad. Donna after saving Roy from Speedy’s arrow blindsides Aqualad allowing Nightwing to face off with Robin. We see Wally Flash racing and fighting Kid Flash. Flash tricks the Kid to run into a wall knocking him out.

Meanwhile the battle rages with the other Titans. Aqualad is fighting Donna Troy, Robin is battling Nightwing. The fight between Roy and Speedy is interrupted by the Lasso of Persuasion of the doppleganger Wonder Girl. Roy under the persuasion of the lasso admits to loving Donna which momentarily distracts the real Donna allowing Aqualad to attack her. Roy turns the table on Wonder Girl as Omen finds Linda. Omen is knocked out by the fake Lilith who takes Linda captive. She has determined that Linda is special to Wally by reading the thoughts of Omen. Kadabra is confused as Wally and Linda only meet years from this story, they are not supposed to know each other yet. Tempest rescues Linda from the fake Lilith and finds out that the “key player” is on the rooftop.

Roy having captured Wonder Girl with her lasso questions her about who the fake Titans are working for.

Kadabra meanwhile rages that Wally must have broken history already which means he is going to have to speed up his plans. He is interrupted by the attack of Garth. He starts to question Kadabra as Wonder Girl reveals that the master mind is Kadabra. Roy reports to the Titans. Nightwing screams at Garth to wait for the others and not deal with him until they find out who Kadabra is. Garth and Kadabra face off and Kadabra blasts Garth as Wally Flash tackles Garth. Next issue from rebirth to death.

This issue was better than the last issue but it has its problems. I liked the action here, the individual battles were fun and it was good to see the adversaries switch off. The cliffhanger at the end appears to show Garth getting killed and leaves me wanting the next issue now.

The biggest problem here is the characterization of Donna Troy. Both the real and fake versions appear to be love sick which I do not believe matches with the Donna Troy I know from the pre-Flashpoint universe or the Titans Hunt series that precedes this title. I do not have an issue with her liking Roy, I just have an issue with her fawning over Roy and acting like a love sick teenager at times.

Overall, the issue was better than the last one and the action is intensifying.