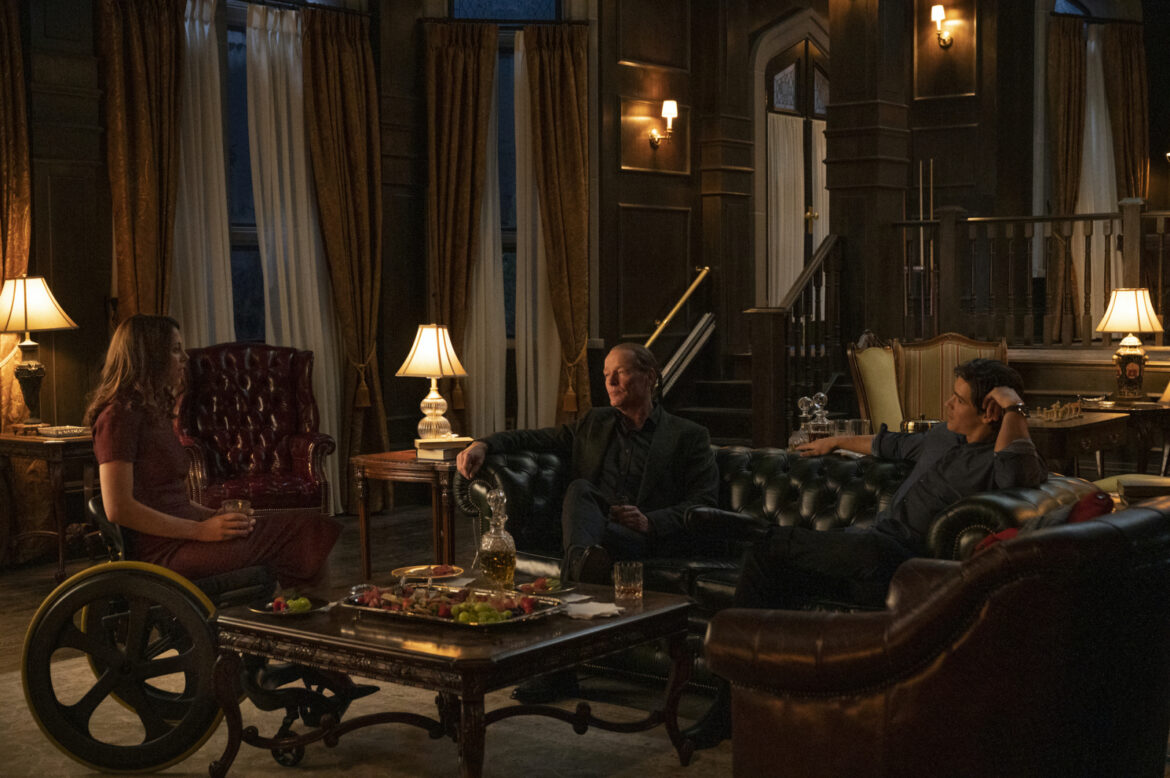 Overview: Now on HBO Max, Titans finally has the budget and exposure needed to make a great show. Titans episode #301 sees Dick Grayson arrive in Gotham to mourn the loss of a teammate, comfort his mentor, and unexpectedly take up the mantle as Gotham’s protector.

Synopsis (spoilers ahead): Jason Todd is back in the Batcave and has tracked the Joker to the Gotham amusement park. Bruce, who is traveling, tells Jason to stand down. Refusing Bruce’s order, Jason uses a mysterious inhaler and goes to the amusement park where Joker ambushes and kills him with a crowbar. In San Francisco, the remaining Titans (Starfire, Nightwing, Superboy, Krypto, and Beast Boy) takedown Gizmo. Dick receives the call that Jason is dead and returns to Gotham. Tim Drake returns to his family’s Chinese restaurant for dinner and sees the reports of Jason’s death on the news.

Searching for Bruce in Wayne Manor, Dick finds a chemistry book in Jason’s room. Jason was never a reader, so this piques Dick’s interest. He finds Bruce in the Batcave and asks about funeral arrangements. Bruce indicates that Jason was already buried in the family plot, right next to Alfred. Dick notices that Bruce isn’t grieving Jason as he is already investigating a new rash of murders in Gotham. Dick meets with Commissioner Barbara Gordon at the scene of a murder and convinces her to join him in talking to Bruce. The three of them sit in Wayne Manor telling old war stories before Barbara chastises Bruce for his taking in young sidekicks and leading them down a path of destruction. Barbara leaves, while Dick vows to not leave Gotham until he has figured out what led Jason to defy Bruce’s orders.

In Jason’s room, Dick finds a key to a warehouse, investigates, and finds a laboratory. Taking a sample of what he finds, he returns to the Batcave for analysis. On the Bat-computer, Dick finds a folder of potential replacements for Jason. Bruce walks in and Dick confronts him about trying to replace Jason. Bruce, visibly upset, begs “Dick, please, I can’t do this alone.”

Back at Titans Tower, Kory enjoys a drink when she receives a vision of men in white in a corridor. The vision ends and she finds herself in an intersection. In Wayne Manor, Dick is awoken by Bruce. Bruce comments that “he” kept laughing as Bruce bashed his head in, though he never indicates who “he” is. Bruce says that his end has come, Gotham is Dick’s, and Dick must be a better Batman. The camera focuses on a bloody crowbar on the floor before fading to black.

The Batman Universe Connections: With the setting of Titans episode #301 in Gotham City, there are numerous Batman Universe characters and easter eggs. Mad Hatter, Mr. Freeze, Alfred, and Jim Gordon are all mentioned but not shown. Barbara recalls a story of Jason cursing at Mad Hatter. She recalls that her father died from a heart attack after being frozen by Mr. Freeze. Other characters are shown but not discussed. When Dick finds an updated Robin file on the Bat-computer, he discovers pictures of Carrie Kelley (Robin from Dark Knight Returns), Daxton Chill (DaxAtax from We are Robins), Stephanie Brown (Spoiler/Robin/Batgirl), and Duke Thomas (The Signal). Arkham Asylum is also mentioned but not shown.

Episode 1 introduces two new Batman characters: Tim Drake and Barbara Gordon. Tim Drake, played by Jay Lycurgo, is featured in one scene and is introduced as a fan of Batman. He delivers noodles for his parents’ restaurant and is visibly affected by the news of Jason Todd’s death. At this point in time, there’s no connection with him and the Bat-Family outside of his fandom. It will be interesting to see how he connects with Dick and the Titans since he is not included in the Robin file of potential replacements.

Savannah Welch’s Barbara Gordon features prominently throughout the episode that bears her name. She is Gotham police commissioner, has retired as Batgirl, been shot by the Joker, and is bound to a wheelchair. There’s no indication of any history as Oracle. Her dynamic with Bruce is interesting. She blames him for Jason’s death and for drawing in young people like Dick and herself into this world. While Bruce calls the fight against crime a “war for the soul of the city,” she sees it only as an opportunity for Bruce to view the death of his teammates simply as casualties of war. Welch brings great strength to the character and I’m fascinated to see how that continues through the season.

While Barbara is handled well and Tim is barely featured, an issue comes with the portrayal of Bruce in Titans episode #301. Iain Glen does incredibly well with the direction of the character he’s been given, but that direction is flawed. Bruce at first doesn’t handle the grief of losing Jason Todd at all, instead choosing to move forward with finding a replacement. Finally faced with grief, he begs Dick to return and admits he can’t be Batman alone. When Dick refuses, Bruce loses control and apparently murders the Joker. While there are certain characteristics true to Batman in that process, Bruce would never beg for help and would never lose control. It is important for Dick to step into the role of moral compass in this series, but the development comes at the cost of the integrity of Bruce.

This is the most Batman Universe-focused episode of Titans so far. With the introduction of Barbara and Tim, the death of Jason, and the apparent murder of Joker at Bruce’s hand (with a crowbar), there is a lot to process as a Bat-Fan. The episode shows that the move to HBO Max has helped with pacing and even lightens the tone while retaining the familiar drab that DC fans love. Episode 1 shows great potential for this season and is by far the best episode to date.