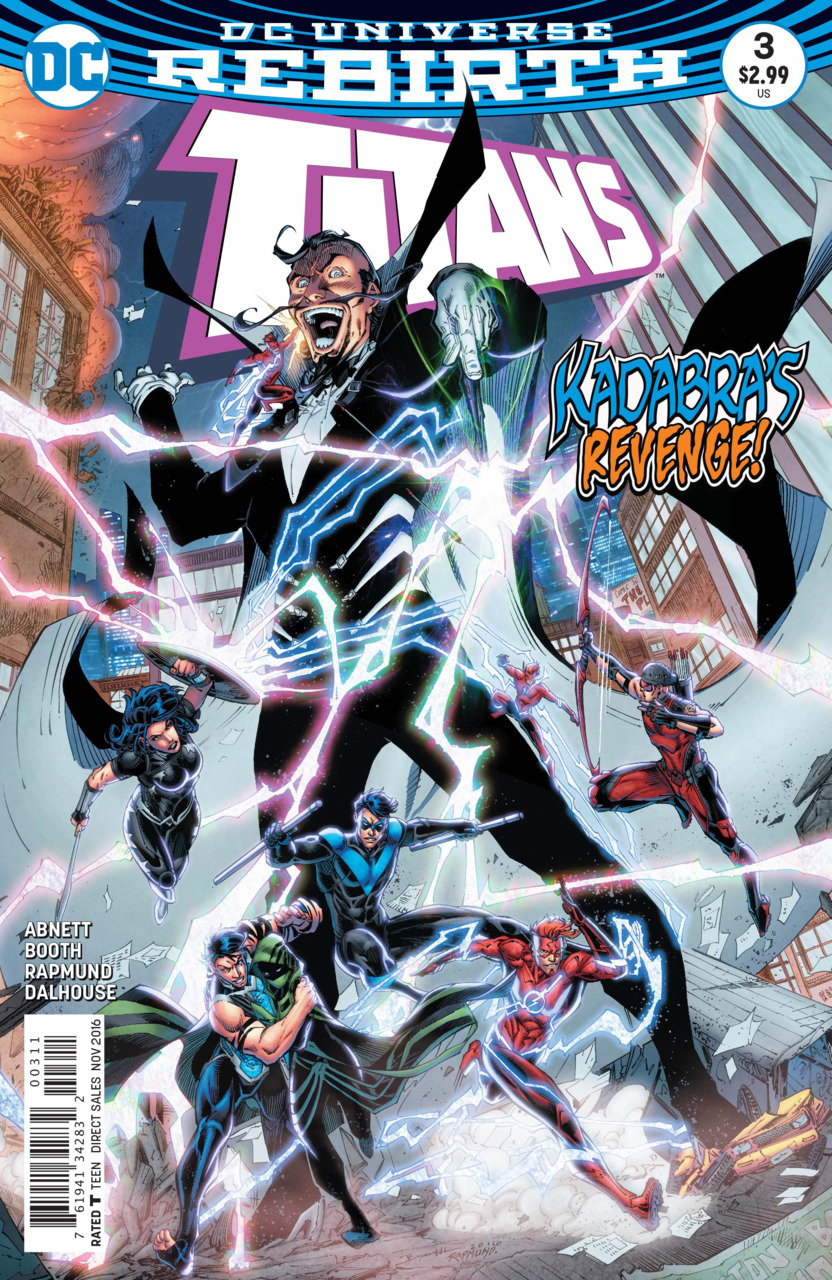 Synopsis: The issue picks up right after the Titans battle their younger doppelgängers created by Kadabra. Garth has just been hit by Kadabra but saved by Wally at the last second. Kadabra relishes the encounter with Wally and reveals that he was the reason people do not remember him. Outraged, Wally demands to know why he would do that and take part in ruining his life. Kadabra states that it was the constant defeats at the hands of Wally and his mentor the Flash that motivated him. Although they never allowed him to gain fame before, Kadabra tells Wally he will help him now.

Before he can reveal more, Nightwing swoops in and knocks Kadabra’s wand away. Kadabra disappears and then reappears in front of the crowds in downtown Keystone City and introduces himself and his grand finale. After he disappears with his fake teen titans, the Titans check in and evaluate their situation. In the aftermath, Wally sees Linda but Nightwing stops him before he rushes to her. She does not remember Wally and the life they lived together in the forgotten history. The team then begins to help out with calming the crowds and cleaning the street. All the while, they discuss Wally’s foe, Kadabra, and his abilities. While Wally explains what Kadabra is and his advanced technology, Donna and Arsenal try to calm down a group of reporters. Donna reminds Roy that he had said he loved her while under the influence of her doppelganger’s lasso. He refuses to admit that he does love her and says he is just a good liar.

In upstate New York, Mal and Karen (former teen titans) see the news coverage of some of their former teammates. They reminisce about their old life but Mal is happy to have a family and moving on. Karen, though, seems to be wanting to go back to the way things were.

Back at Keystone City, the Titans are at a diner and compare notes on what they do not remember from this erased timeline that Wally came from.

Meanwhile, Kadabra learns from his fake teen titans that Kid Flash is much too attached to both the other titans as well as Linda. Kadabra admits that Wally’s obsession with Linda indicates some problems with the timeline which leads to the involvement of “him”. As he says this, Kadabra opens an old pocket watch but then returns to his scheming.

In Keystone City, Omen comes into the diner and informs Wally that Linda is finished with the paramedics. Against his friends’ advice, Wally rushes to her. Linda still does not remember Wally but appears to be warming up to him . Suddenly, Kadabra appears out of thin air and kidnaps Linda. Wally begins to feel like his return has only brought harm to those he loves.

Thoughts: Admittedly, I have not been following this series since Rebirth. After reading this, I’ll probably start though since Wally has become such a key player in Rebirth. This issue had some fun moments like the diner scenes where the team is just sitting around and talking. They are not necessarily teens anymore but still young adults so its nice to see them in a setting that fits their age range.

As far as the plot goes, I really hope they do not increase Kadabra’s involvement with the disruption in time and Wally’s “exile” to the Speed Force. Its clear that key members of the Watchmen are behind the forgotten timeline so I do not need them to tease anything further.

Not being a big reader of Teen Titans both pre flashpoint and New 52 but a big fan of Young Justice, this series has me interested to continue and that is the point of any issue: to get new readers. I would say this accomplished that with some fun action and character/team moments. Overall, I’m looking forward to this series going forward.