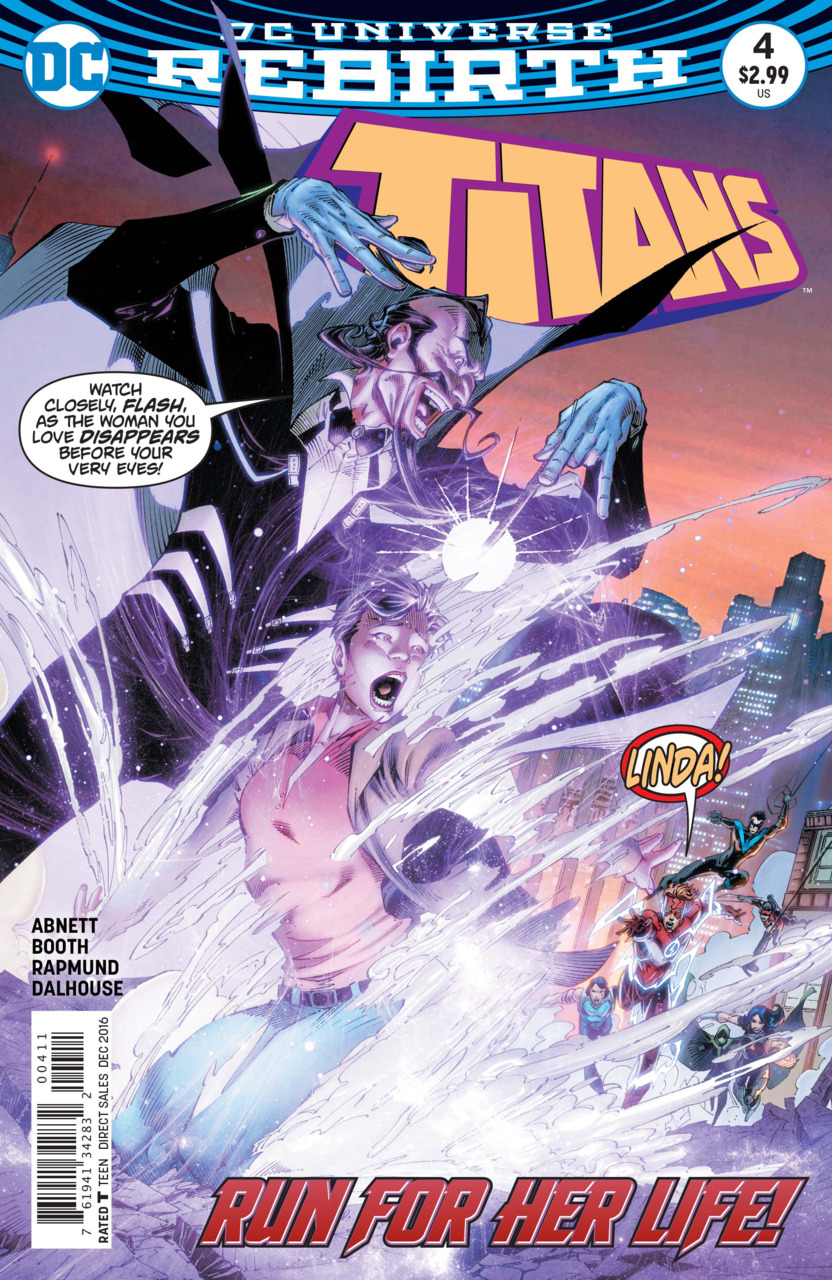 “The Return of Wally West Part Four: Now You See Her…” opens where the previous issue left off, Abra Kadabra has whisked Linda Park away in front of Wally West. Wally is frantic, he tries to fight Kadabra but he is able to avoid Wally’s attacks. He wants to play a game with Wally called find the lady. Wally beaten, wonders if he ever should have come back, all he is doing is ruining everyone’s lives.

At the Keystone Theater District, Kadabra returns to his puppet Titans. They are holding a tied up Linda Park hanging upside down. Kadabra calls this treatment undignified and changes Linda into a gown and now she is tied up right side up. He taunts her. Linda curses Kadabra and and demands what he wants with her. Kadabra says that she is the pawn he is going to use to destroy the Titans and more particularly, he is going to obliterate Wally West. All this is in front of his applauding puppets. Kadabra asks his Lilith the location of the Titans. She reports that they are in the middle of Keystone City but mentally they are lost.

Nightwing is trying to calm down Wally. He is screaming that Kadabra took her from him. While this is going on, Lilith is blaming herself saying that she is not cut out to be a superhero. Nightwing shakes Wally to calm him down saying that they are going to find Linda. Next he focuses his attention on Lilith saying that the situation is not her fault, all the Titans are being played and she is a Titan and always will be and he does not want to hear any more doubts from her. Nightwing asks Lilith to use her psionic connection to Kadabra to find him. When they find Kadabra, they will find Linda. She complies but she sees traces in three different places. This prompts Nightwing to separate the team and head to each location at the same time. Lilith psionically gives the Titans the three locations.

At Keystone Theater, Kadabra learns and expects that the Titans are on the move. He doubles the powers of his puppets and sends them off to face the Titans. Linda tells Kadabra that he is insane but he reveals that he is from the future. He knows that Wally will finally beat him so he went back to the past to prevent that future.

At Wilson High School, Wally and Roy arrive to a dark gymnasium. Roy uses a flair arrow to reveal that they are not alone. Robin and Kid Flash are there and they attack Roy and Wally.

Linda asks why Kadabra needs her. He tells her that she is very important to Wally West, she counters saying that she hardly knows the guy. Kadabra insists that Wally is clinging to the reality where Linda and him are in love while he means nothing to her in this reality.

At the Gallery of Art, Tempest and Omen arrive and are immediately attacked by Wonder Girl and Speedy. At the same time at the Keymart, Nightwing and Donna Troy are in a fight with Aqualad and Lilith. At the high school Robin gets the upper hand on Arsenal and holds a batarangs to his throat. Robin goads Wally asking if he is fast enough to stop him from killing Arsenal.

We cut back to Kadabra. He tells Linda that when Wally accelerates too fast, he loses himself to the Speed-force like all the Flashes. When that happens, they will vanish into infinity and never to return. Wally had been able to evade that because he is anchored to reality through his mutual love of Linda Park who is his lightning rod. The problem here is that Linda does not love Wally meaning that now she is not Wally’s lightning rod.

Kadabra reveals himself to Wally. He shows that Roy is not the only one in danger. Dick, Donna, Gar, and Lilith have been all defeated in their fights as well and are being held hostage. To make it worse she shows that he is holding Linda over lava and will drop her in. He also has revealed that he has moved everyone. Dick and Donna are being held in Coast City in California. Tempest and Omen are now in Metropolis and Linda is being held in Gotham. The round trip to all locations will be seven thousand miles. Wally has to choose who lives and who dies. Wally tells him he is going to save them all, all he has to be is faster than he has ever been before even if it kills him.

This was a very good issue. It did follow the usual trope of splitting up the team but I think it was done here in good measure. Kadabra strengthened his team while the separation of the Titans actually weakened them and allowed the puppets to win. I did think it was interesting what matchups that were created. The characters were mixed up in that the counterparts did not face off with each other except for Kid Flash and Flash themselves and Flash easily beat his counterpart while the others were all taken down. The cliffhanger here makes me want to pick up the next issue and as this issue is released monthly I will have to wait a whole month to see how this ends.

Overall, this was a very enjoyable issue.