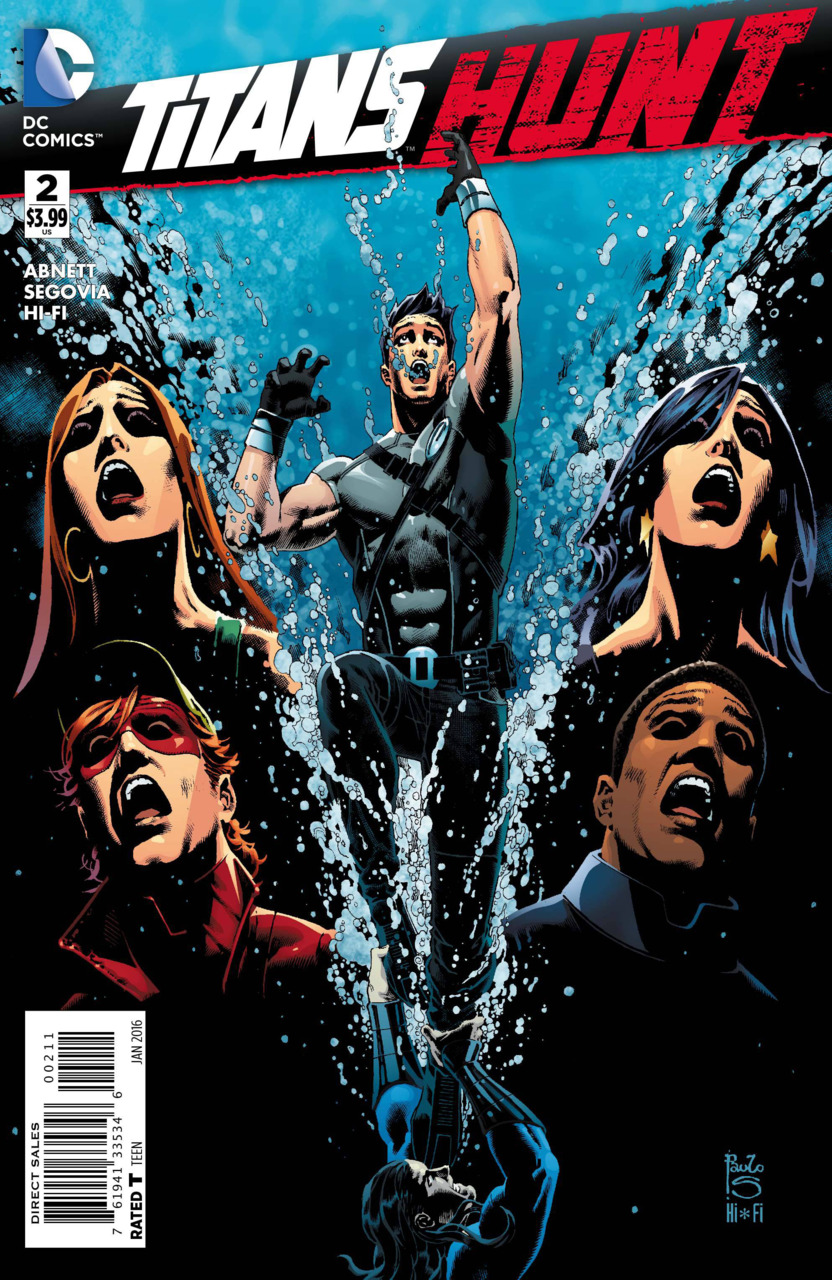 “Titans Hunt Chapter Two: Trouble Always Finds Me” opens with Roy Harper. Roy this time is driving his truck out of Oklahoma. From the caption we learn that he is “hunting for answers, searching for sanctuary, running from demons or running toward them.” Unfortunately Roy is drinking and we see that he has his bow and quiver with him. He suddenly sees a shadow figure smiling in his windshield, stops his truck and jumps out with an arrow notched on his bow. Unfortunately we learn that Roy is not alone on the road, he is quickly found by two police officers with side arms drawn telling him to drop his bow.

The scene shifts to the Batcave. Dick Grayson is running a keyword and data search and he is soon interrupted. We see Alfred complete with right stump approaching. Dick muses that he should have known that he would have zero chance of stopping by the cave without Alfred noticing him and Alfred quickly says that he is always welcome. Dick hugs Alfred and even Alfred realizes that he is really seeing Dick back from the “dead”. Alfred mentions Spyral and Dick answers that Spyral cannot help him with his search because if he asked for their help, then Spyral would know. Alfred agrees that that would be a problem. He asks what Dick has in the cooler and Dick shocks Alfred by telling him that he has the lungs of an Atlantean.

The scene shifts again to the liquor store where Gnarrk works and we now learn lives. He sleeps in the stock room and he is awoken by the owner who berates him. Gnarrk ignores the man, gets up, gets dressed and picks up a box of chalk. Throughout this sequence we read the caption boxes that talk about hunting and tracking the prey. Gnarrk sits down and draws on the wall. What I can recognize is the bat symbol, men with bows and birds flying. Gnarrk smears some of the chalk across his face and walks out of the stock room carrying a bag of arrows only saying that he has other work to do. The owner yells after him asking if he went to a recruitment agency or if he found another job. Gnarrk shoves the man out of his way saying that it is time to go out and hunt.

Back in the cave, Dick and Alfred continue their discussion. Dick tells Alfred about his encounter with the Atlantean Garth and his “dream”. He recounts that a girl Lilith told him that he should have talked to Garth. Now Dick has to find him and her soon. Dick says that Lilith, Garth and the whirlpool he saw meant something to him but he does not know how. Alfred starts typing on the computer keyboard musing about hunting and finds nothing. Then Alfred states that primitive hunters often used themselves as bait and allow their prey to find them. Dick understands what he must do and leaves the cave with the lungs.

Back with Roy, the cops find that Roy has been drinking. The cop moves to arrest Roy and he strikes the officers and takes one of the officers guns and holds both men at gunpoint saying that he does not want to be doing this, he wants to be far away and with the person who can help him. I think Roy is referring to Lilith, his counselor. Suddenly Roy hears a voice that the officers do not hear. The voice tells Roy that he is not a hero and what he is doing is bad and therefore his is a bad man. Then the voice talks about building something and the scene ends with one of the officers tazing Roy.

The scene shifts to the award winning Mal. He is talking to a reporter, Alana on the phone. The conversation quickly centers on Mal’s pregnant wife Karen who Mal affectionately calls “Bumblebee” I believe that this is a reference to the character Bumblebee who was a Teen Titan at one point. Mal suddenly hears his wife scream for him. He runs out of the studio to find out what is happening. Mal finds that Karen is looking at some pictures of the recent awards ceremony and the photo where Mal is accepting his award has a shadowy specter behind him. She asks Mal what the thing behind him is.

We go back to Dick Grayson. He is at a beach and he throws the box containing the lungs into the sea water. He turns around to wait and we see a whirlpool start up and Garth leaps out of the sea to presumably kill Dick for taunting him with the lungs. Dick tries to get Garth to listen and the fight begins. Dick does hold his own with the help of his Eshima sticks but his real goal is to talk to Garth. Garth shouts that he does not obey surface dwellers but he is quickly interrupted by a sword carrying Amazon, Donna Troy declaring that he will.

A lot happens in this issue as evident from my recap. Again I am convinced that we are in the main DCU as now Donna Troy has appeared as she had been appearing in the Wonder Woman comic. We get a theme of hunting in this issue and I think the title “Trouble Always Finds Me” as appropriate because we hear about searching for prey and actually drawing the prey to the hunter. We definitely see the trouble as most if not all of the characters find themselves in some form of trouble. Roy with the police as he is drunk driving and he is armed with a deadly weapon. Dick and Garth are fighting with Garth clearly wanting to kill Dick. Mal discovering that something again presumable the shadow figure Roy saw in the beginning of the issue is stalking him. Gnarrk losing his job even though he does not care. Donna flying in sword in hand.

We get some good comedy beats with Alfred. With every exchange with Dick, Alfred seems to have a side comment. It is good to see this relationship as well as the continuity of Alfred just finding out about Dick’s survival of Forever Evil and Alfred’s missing hand. It is also good to see Alfred being useful here as he tries to help Dick with his dilemma.

This leads me to my biggest continuity gripe of this issue. Where does this fit in with Roy and his stories with Jason Todd in Red Hood/Arsenal. Clearly Roy is alone and he is drinking which Jason does wander about in issue six of that title. (See my review of Red Hood/Arsenal #6). There is even a note referring the reader of that title to the first issue of this series.  I do not see where this issue fits in with the Underbelly fight in Gotham as Roy clearly is not in Gotham nor is he in costume.

Overall this continues the set up, but we do start to see some of the characters getting together if not in a friendly way. The story continues to hold my attention and I look forward to the next issue. This was a great issue with my only real gripe being Roy’s continuity.