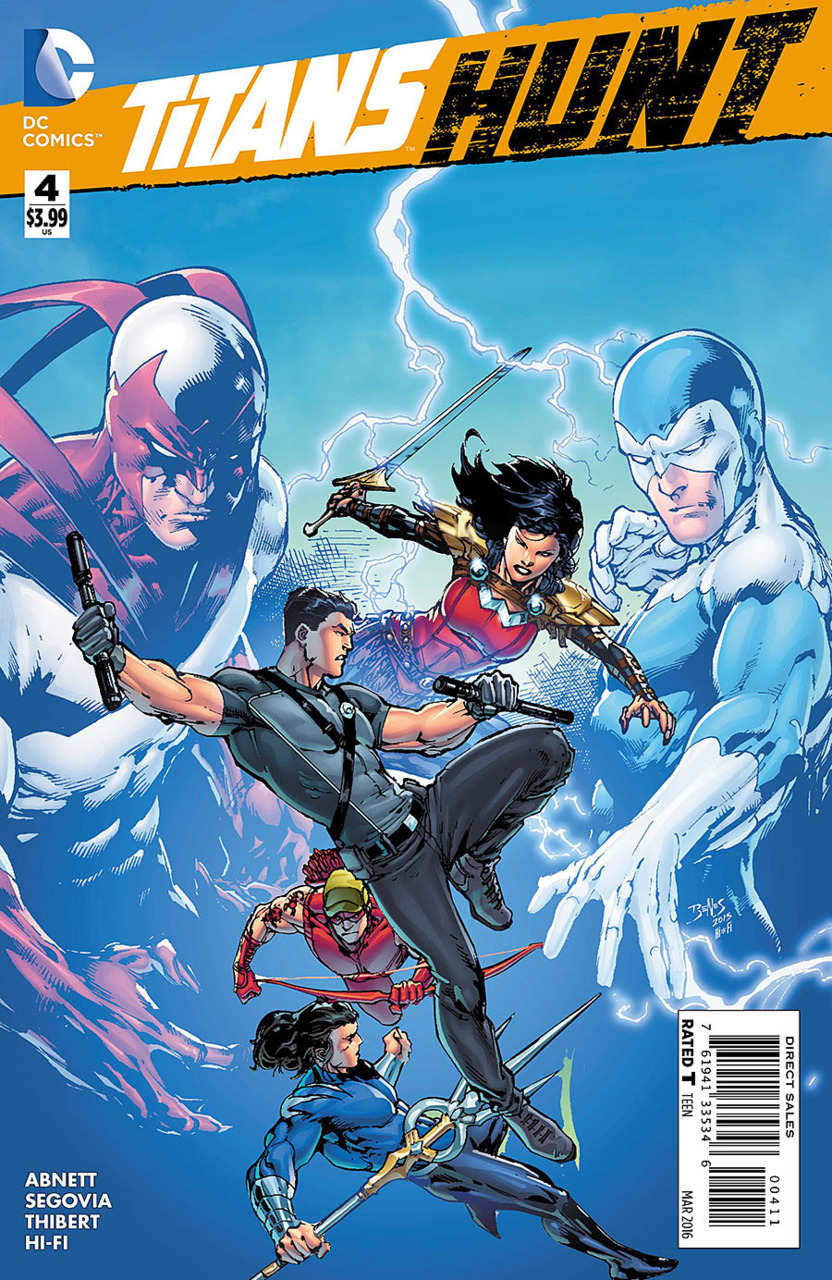 “Titans Hunt Chapter Four: Masks” opens with the Teen Titans, but not the Titans we are used to seeing in this universe. Here we have Robin, Wonder Girl, Caveboy, Aqualad, Hawk, Speedy, and Lilith. The team was attacked and someone named Herald was taken by a feral being. The other member of the team, Dove went after the thing. Robin tries to get control and calm the team. The team is struggling to hold it together falling into bickering amongst themselves. We do learn that Wonder Girl, Donna has a relationship with Speedy, Roy. Caveboy who is a tracker has a lead and starts to lead the team forward. The team is hit by a screaming song that incapacitates them.

We shift to the presumably the present with Dick Grayson, Donna Troy and Garth reeling from the screaming music as before. This sound seamed to conjure a waking dream that was shared among the three of them. The dream was presumably the opening sequence of this issue. Dick thinks that the three of them knew each other but somehow that memory was wiped from them.

At the hospital Karen, Mal’s wife arrives and is met by Jung-Mo. Jung-Mo relates how Mal collapsed at the rehearsal and that he was loaded into an ambulance. Mo arrived at Metropolis Presbyterian Hospital but the hospital has no record of Malcolm Duncan being there.

Elsewhere we find the ambulance and Mal stumbles out of the back with no idea where he is. In the woods Mal is met by the spirit we have seen before. The spirit orders Mal to be his herald and call them, presumably the Titans. Mal says he will not and the spirit threatens Karen and their unborn baby if Mal does not cooperate. The spirit reveals that his name is Mr. Twister and Mal starts his singing.

Elsewhere we catch up with Dawn Granger, the current Dove. She is on a mission. She is trying to convince a Mr. Varley to turn himself in to the federal authorities for the crime of organ harvesting. Varley orders some of his thugs to take out Granger and she transforms into Dove and starts to deal with the thugs. Suddenly Hawk shows up and starts pounding the thugs and turns on Varley. Dove stops him from killing Varley. Hawk has heard the sound again and it was calling him, again Dove cannot hear this sound. Hawk says that someone has died and he needs to remember who that person was. We see a “T” that Hawk draws on the wall of the memorial in blood.

We cut back to Donna, Dick and Garth. Dick continues to try to persuade the three of them to work together. Grayson suddenly remembers something he took from the Batcave and stashed in his bike. He leaves asking the others to not kill each other while he is gone.

We now catch up with Roy and Gnarrk. Roy is trying to steal a car to get away from the cops. Gnarrk says that stealing is wrong. Roy questions who this guy he is with thinks he is and Gnarrk responds by saying that he is Caveboy and Roy is Speedy and that they are supposed to fight together. Roy scoffs at that. Gnarrk grabs Roy’s arm and says that they are supposed to hunt together and find the nightmare. The way of the hunt is on Roy’s tattoos. Roy just wants a drink and Gnarrk slaps him on the head and says that he does not. What Roy really wants is to find the nightmare and they are to go together because fate is waiting.

We return to Donna and Garth. They are still waiting for Dick to come back. Dick comes back in the uniform of the masked vigilante Nightwing to hunt whatever is stalking them.

This is getting a little old. The pace of these issues are so slow. We get some advancement in finding out that the antagonist is Mr. Twister but that is really about it. We continue with Roy and Gnarrk doing something and Dick, Donna, and Garth continue to talk about memories and fighting with each other. Lilith does not appear in this issue except in the flashback in the beginning but it appears the Twister has something over her and Mal.

It is also getting old shifting from one scene to the next. I really want to see these characters to get together and do something together.

Overall, I am hopeful for this story but this pace is really slow.