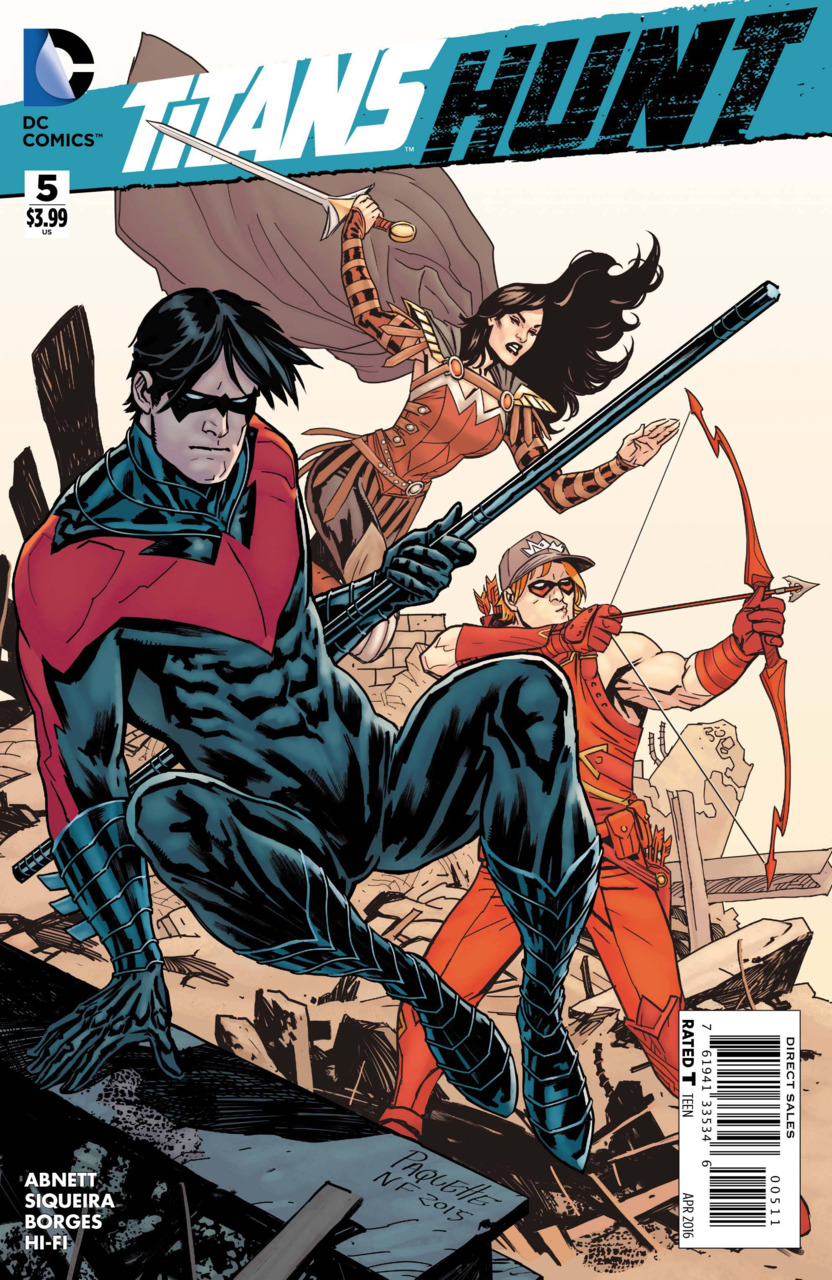 “Titans Hunt Chapter 5: Sticks and Stones” opens in the past. We see Mal, also known as Herald and he is not alone. He is talking to Mr. Twister who is creating a tower with stairs on the outside. Herald is being ordered to climb the stairs and sing. Mal tries to counterattack and starts using his singing powers on Twister but Twister calls in a giant friend to intervene.

We transition to today and a very similar scene, involving Mal and Twister. Mal does not know who or what Twister is. Twister agrees and says that the Titans purposely forgot just to spite him. That memory is not completely lost, there is a scrap of it and Twister is using that scrap to get back in. Mal tries to physically attack Twister but finds out that he is only an apparition and passes right through him. For his part, Twister calls his giant friend to persuade Mal.

At the Hatton Corners Soda Fountain the patrons get a surprising site. Nightwing, Donna Troy and Gar enter the dining area. A deputy reaches for his side arm saying that they do not want trouble. The three are there looking for answers. They talk to the deputy about what might have happened four years ago. The deputy talks about the scare they had. There was a wild beast in the woods and the deputy was just 15 years old at the time. The beast was just a story until four years prior. People started to actually see this beast. There was a curfew for the kids and the townspeople converted an old boat house into a clubhouse. This is presumably the clubhouse we spent the previous issues in. Nightwing asks the deputy if anyone was called to help from the outside. The man does not remember however Donna and Gar both seam to remember snippets. We get a quick flashback of the clubhouse with the boys talking to Robin, Speedy, Aqualad and Wonder Girl. The boys called them in expecting to get the Justice League. Back in the present Gar remarks that this mission was done in secret and then forgotten on purpose. Donna wonders about mass amnesia but Dick says that this must have been deliberate. The beast apparently went away as there was not any trouble again. Dick says that the trouble may be back and that Robin, Wonder Girl, and Aqualad are going to handle it. Donna and Gar stare at Dick.

Gnarrk and Roy are outside a building. Gnarrk does not understand why they are there but Roy says that he is there for answers and wisdom. Gnarrk tells Roy that he will go inside with him but they need to bring their weapons and Roy needs to put on his costume. Inside we see Hank Hall in the waiting room. Inside the office Dawn Granger is talking to Lilith, asking for help. Dawn knows that Hank has seen Lilith in the past and she is asking Lilith if she can talk to him. Lilith is surprised to find out that the former patient is Hank Hall and that he is outside Lilith’s office. We see Hank shout Hawk and and transforms into Hawk to meet a surprised Roy Harper and a determined Gnarrk. Hawk attacks the pair and fight is on. Eventually the outside wall is busted out getting Lilith and Dawn’s attention. Lilith runs out yelling at the three to stop this fight and Dawn transforms into Dove to jump in surprising Lilith that she is Dove and then Lilith faints.

At the hospital, we catch up with Karen Duncan. She is approached by Neil Richards who says that he is there to help. Richards starts by asking about when Mal was a member of the Teen Titans which confuses Mrs. Duncan thinking that the Titans were some kind of boy band. Richards insists that Mal was a superhero with the Original Teen Titans. Mrs. Duncan gets upset and yells at Richards to leave her alone. Richards reveals that the shadowy figure in Mal’s photo is in fact Mr. Twister and he has Mal and wants everyone else. Including her and the baby.

Donna, Dick, and Gar are now in the woods. They are unsure about what they are looking for and Gar is questioning the names Dick used in the diner. Dick says they were the masks they wore at the time and they have all forgotten a shared past and now they are starting to remember. Nightwing starts by suggesting that they smoke out the beast. Donna is engrossed with the rubble around them and she flashbacks to the past with her as Wonder Girl and Roy as Speedy. Donna shrugs it off and then they hear something. The three are attacked by a giant beast.

With Mal and Twister, Mal is starting to wake up from his encounter with the beast. Mal goes for his cell phone but Twister says that will be useless. Mal is there to sing the right song to open up the universe allowing Twister to completely return to the world. Twister wants Mal to call the Titans in and open the door. Twister shows Mal a strange looking amplifier that will give Mal’s powers a boost. Mal starts to sing his song. Next issue the Quick and the Dead.

We finally move forward in the story. Donna, Dick, and Gar stop fighting and start to work together. We get Roy and Gnarrk joining up with Hawk and Dove and Lilith even though they start fighting. We get a little more information into Twister’s plan and motivation.

The mystery deepens with what this beast is and what happened four years ago. Apparently everyone involved, civilian and hero have seemed to have all forgotten and now those memories are resurfacing. The question is what is causing this memories and I am more hopeful that these questions may be answered.

As before a lot has happened and it gets confusing with all the little scenes going on. I count four convoluted scenes still going on and we are adding more characters to this story like Richards. We do not get a clear answer as to who he is and what his connection with these events are except he seems to have the most memory as to what is going on.

This issue was an improvement. We finally get forward motion but I still believe that we have too many scenes going on at the same time and I am hoping that these story lines will start to merge soon.