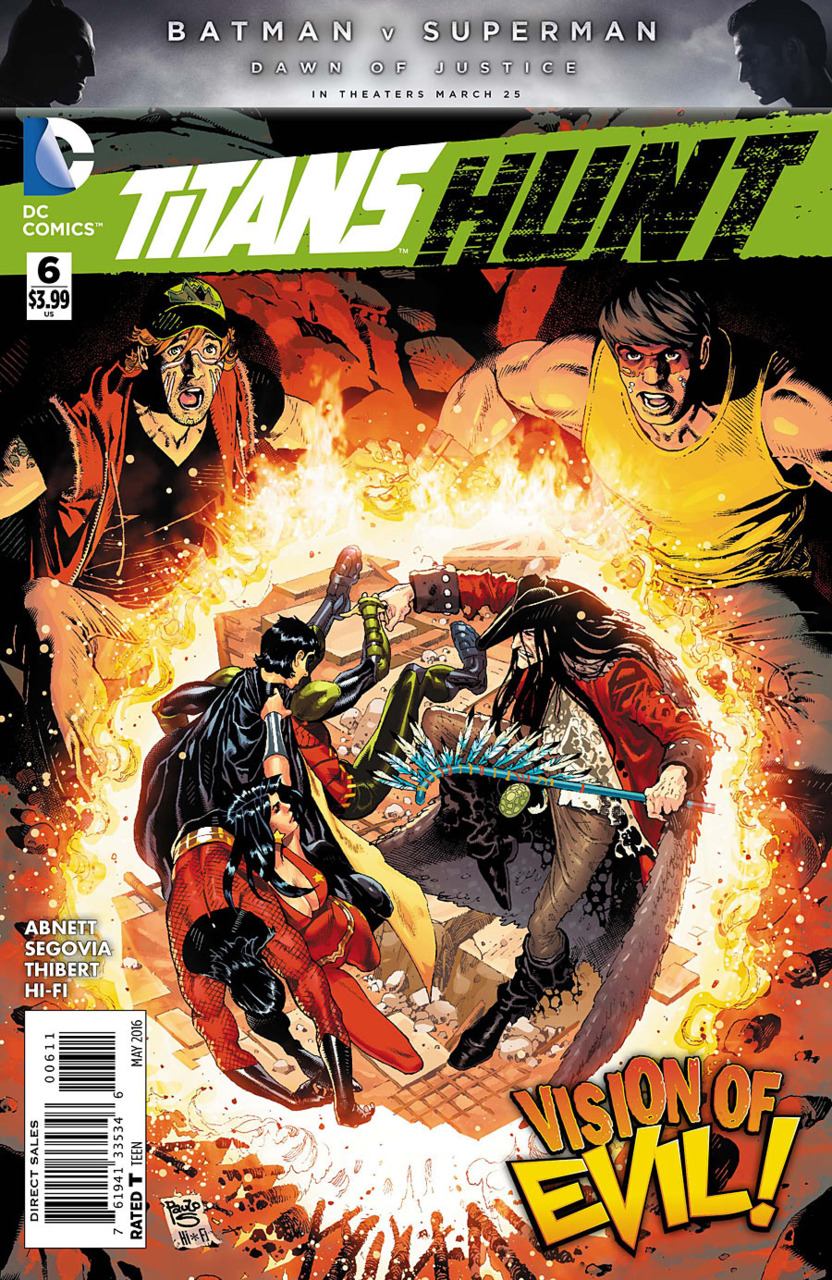 “Titans Hunt Chapter 6: Diabolical” opens up with Mal singing his song that will bring his greatest friends to their doom. Mal continues to plead with Mr. Twister to allow him to stop but fails.

Gnarrk finally knocks Hawk out and approaches Dove asking if he must fight her as well. Dove wants to avoid that fight and Roy regains consciousness himself.

Back in the woods the fight continues with the three Titans and the beast. Nightwing believes they are fighting the meta human Mammoth. In the fight Nightwing and Donna are having a hard time concentrating over the music. Nightwing is knocked out of the fight and since we do not see Garth, presumably he has been knocked out as well that just leaves Donna against Mammoth. Donna sees Mr. Twister’s tower in the distance and decides that she must reach it and Mammoth cannot stop her.

At the hospital, Karen continues her conversation with Mr. Richards. After her experience with the music, she is more open to listen to Richards. The two of them go into the chapel to continue their conversation about the Teen Titans, leaving Jung-Mo behind to wait for any news.

With the fight over in Lilith’s office, Lilith, Hawk, Dove, Arsenal and Gnarrk start talking. Lilith explains that five years ago the heroes except Dove were the Teen Titans. Lilith has no explanation for Dove’s presence and Lilith explains that there should not be a Dove. Lilith talks about Mr. Twister and that their only salvation against him was to forget about their time as Titans. Lilith explains that she is an alpha class psionic and she was able to erase everyone’s including her own memories. Roy asks how she is able to remember now. Lilith confesses that a year ago, Twister starting whispering the truth to her.

Donna and Mammoth continue fighting while Richards and Karen talk in the chapel. Richards recounts his knowledge of Twister to her. He says that Twister requires a certain ritual that will allow him unfettered access to their plane of existence when completed. Twister needs help and five years ago the Teen Titans battled him to stop him from entering the world. He was able to take control of them and then started to manipulate them to make them help him with the ritual. At the last moment, they prevailed and stopped him. That victory did require a sacrifice. They had to forget everything in order to break Twister’s hold on them. Now Mr. Twister is trying again and he has Mal and is using him to bring his slaves back. Richards says that Twister is able to awaken latent meta powers in people then asks Karen how long has she had powers.

Garth wakes up and attacks Mammoth together with Donna. The two are able to put the Mammoth down. Back at Lilith’s office, Lilith continues her exposition dump. Twister wanted to use her to awaken the memories in the other Titans. She resisted and tried to warn the other Titans which we saw in the first two issues. Lilith is telling the rest now because Twister has reached the Titans and she hopes to stop them from confronting Twister.

Donna wakes Dick up after the fight. Dick said they stopped Mammoth through team work. Donna points to the tower in the distance and says that is where they need to go. Richards steps out of the hospital chapel to make a call. Outside, he calls himself the Moderator of Diablo and he is issuing the sanction order to eliminate all of the Titans. Richards go back into the chapel.

An explosion rocks Lilith’s office. Lilith says that Diablo is coming for them. We close with two members of Diablo, Honeybun and Diablo outside of the burning office building. They are ready to hunt some Titans. Next issue: Death, Where is Thy Sting.

This issue is basically the exposition issue. We do get two separate conversations that correlate with each other. We learn that five years ago these Titans faced off with Twister and we’re almost defeated by him. In order to gain victory, they had to wipe their memories of everything involving the Titans.

I did like the fight that was interspersed with this exposition. We learn that the beast is Mammoth and since he is under Twister’s influence, it can be inferred that Twister was behind the beast all along. It was good to finally see Donna and Garth take Mammoth down together. The only question I have is Roy and Dick do not have super powers so how is Twister able to entice them. What latent abilities do they and Karen have since she to is able to hear Mal’s song. I also am interested in this Diablo group. Who are they? How do they fit in with these events?