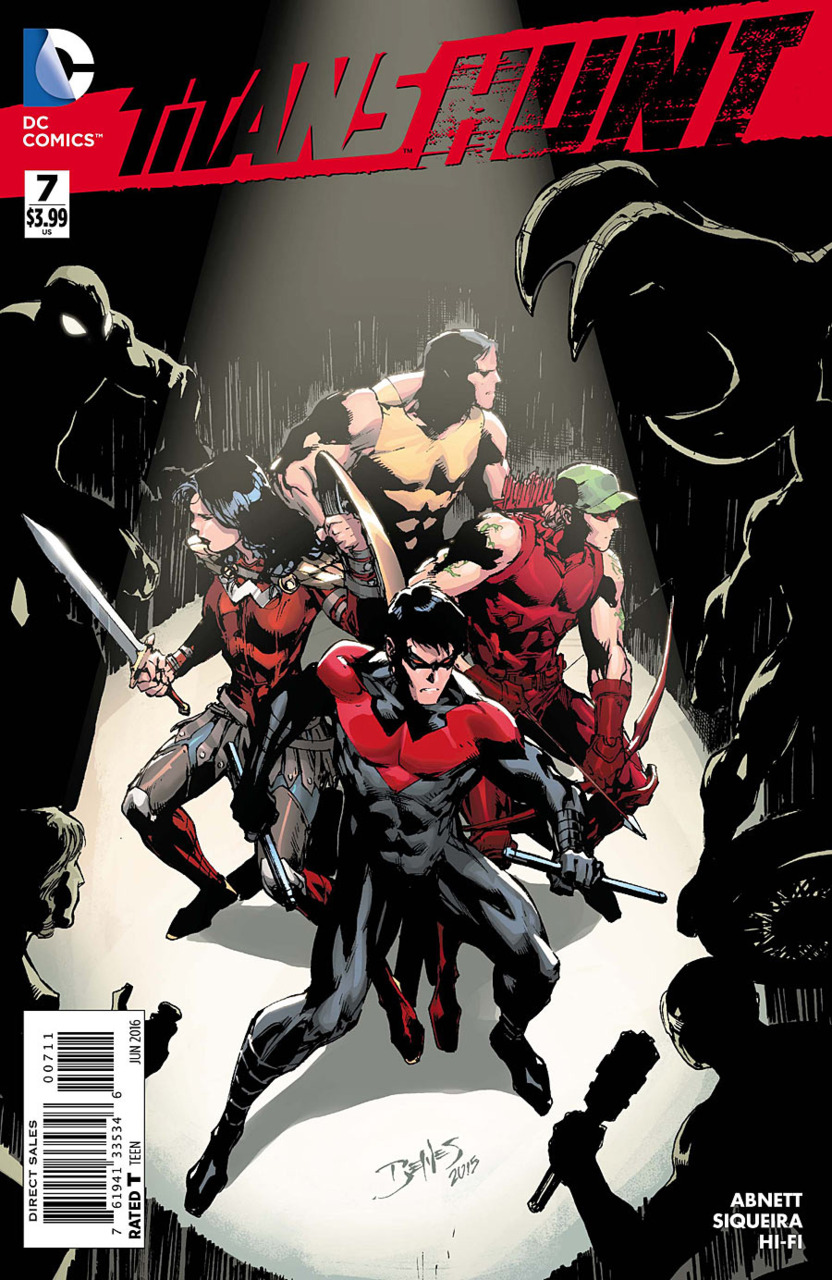 “Titans Hunt Chapter Seven: Swan Song” opens with Hawk facing off against the duo that destroyed Lilith’s office. The man snaps his fingers and lasers shoot out of the headlights of their car and incapacitate both Hawk and Dove who was with him. The woman goes in after the others and the man’s hand transforms into what looks like a gun.

In the woods after the battle with Mammoth, Nightwing, Donna and Garth come across a tower rising into the sky. The three start to climb the steps of the tower. The trio have recollections of this tower and the possibility that they had built it themselves. Garth warns them to be ready for any attack.

Inside Lilith’s destroyed office, Lilith tries to lead Roy and Gnarrk out the back. She gives the two information that the threat they are facing now is called Diablo and that she called them in. Gnarrk presses ahead of Roy and comes face to face with the girl. She quickly grabs Gnarrk by the throat. Roy releases an arrow into her arm and she drops Gnarrk. Here we learn that she is not human, in fact she is robotic and she removes her face and body like a mask and costume. Roy and Lilith make a run for it. Lilith tells Roy that the assailant is an experimental combat-chassis strike droid. She names it Honeybun and that it is one of Diablo’s principle network agents. Lilith hired Diablo to help them against Twister. Honeybun appears in front of Roy and he goes into the attack releasing a volley of explosive arrows into it. The arrows have no affect forcing Roy and Lilith to duck for cover as the arrows explode. We learn during this fight that Diablo specializes in meta problems and Lilith was hoping that they could protect the Titans from Twister.

Back at the hospital chapel, Richards approaches Karen Duncan with a gun and holds her at gunpoint. Richards explains that there are two ways to stop Twister. The best case is to block him while he is weak and then save the lives of his slaves including the Titans. The worst case if he is past that point, they deprive him of his pawns by eliminating them. This is the worst case and fires on Karen. She moves out the way with super speed making Richards realize that she does have powers, even though she didn’t know it herself. She is able to blast Richards through a wall knocking him unconscious.

Back outside the office, the male Diablo agent points his gun hand at the unconscious Dove. In response Hawk throws him over to his car and then revives Dove. The two take off in the air to lead the agent away from the residential area. The agent pursues in his car while communicating to Honeybun. Honeybun grabs Roy by the head and crushes his bow.

Dove lands and prepares to face off with the car when it skids by her and transforms into a monster robot with the agent wired to it. Hawk rushes it and rips the thing to shreds.

Lilith attacks Honeybun with a psychic blast that forces her to drop Roy. Roy punches the robot while Lilith continues her attack on it. Gnarrk now awake comes up behind it with a spear and kills it. Gnarrk said that there was a small unplated area where the innards were exposed, giving Gnarrk the weak spot he needed for his attack.

Lilith approaches the two saying that they need to leave before more Diablo agents come. Lilith admits that she turned to Diablo to help her against Twister so the other Titans could remain ignorant of the threat. Since Diablo is now moving to kill the Titans, then they have decided that the Titans are beyond salvation. She calls them Twister’s pawns and now that they remember, they are now stronger pawns and Diablo seeks to stop Twister by removing any power he can use. Roy says that they are not doing anything. Lilith agrees but says that they are not the only Teen Titans.

Nightwing, Garth, and Donna reach the top of the tower where they see Mal hunched over the keyboard of the machine Twister was using to draw the Titans in. The three approach Mal and he identifies them as Robin, Aqualad, and Wonder Girl. He urges them to run but Twister comes up behind them ready to use them. Next issue Titans Together.

I think this issue was another so so issue. The main point of this was to provide more back story. In this case we get into this Diablo group and learn a little bit about their stake in this whole affair. With that I found this issue to be primarily a filler issue. The main point is the battle at Lilith’s office involving the five characters gathered together and the two agents from Diablo. The main story involving Twister though is mentioned throughout became a minor point in the story just catching up with Dick, Garth, and Donna as they finally encounter Mr. Twister for the “first” time.

I did find the brief scene at the hospital interesting. It is here that we see that Karen actually has powers herself. My question here is was she a member of the Titans as well and if so how come she and Mal seemed to have forgotten about their abilities while the others have not?

The fight was fun in a science fiction way that I do like. I just missed the point other than to provide a creative way to provide exposition on a part of the story that I believe is just extra filler and does not satisfy the overall plot of this mini series.

Overall, I just wasn’t wowed by this issue.