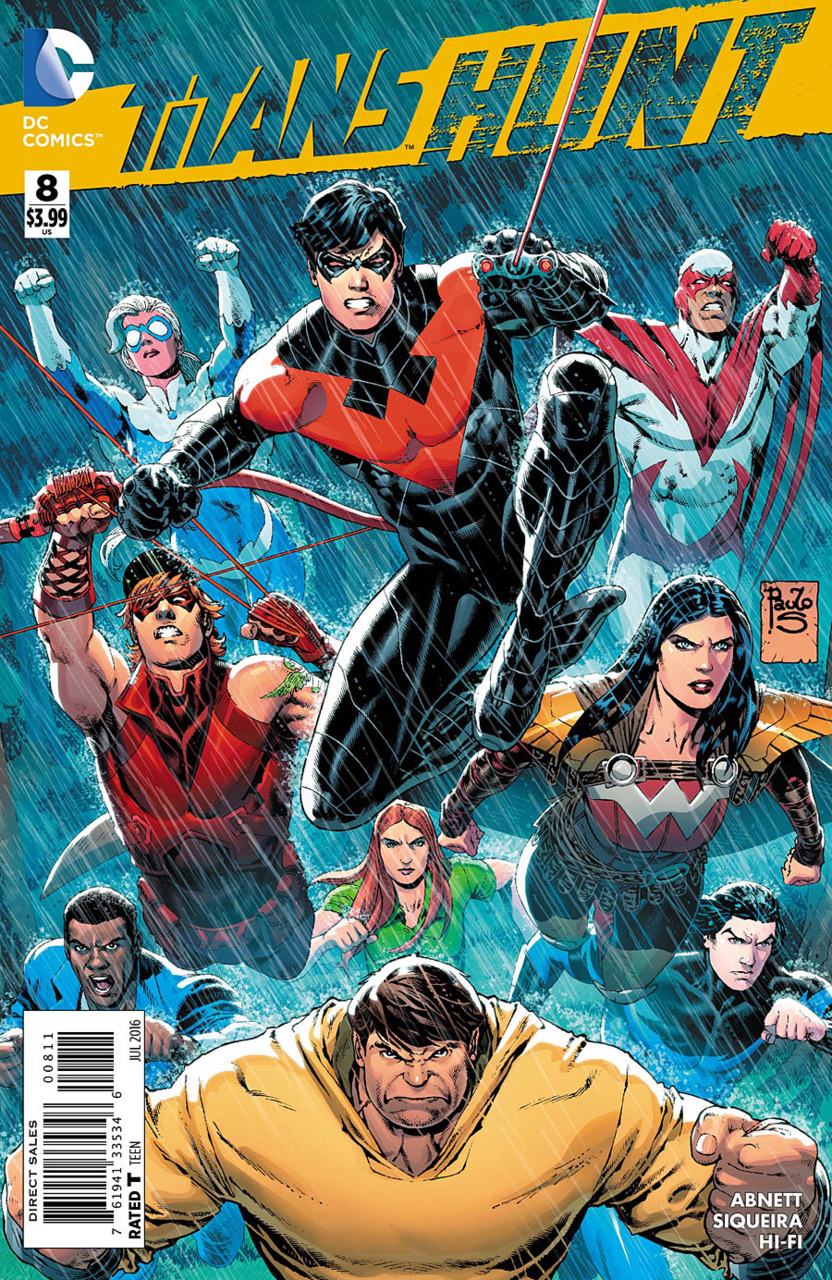 “Titans Hunt Chapter Eight: The Other Side” opens with a quick flashback. We see the nine Titans of old facing off with Twister. We hear that they won, but in order to triumph, they had to forget.

We catch up with a car. The car is carrying the other Titans, Arsenal, Gnarrk, and Lilith. They are being followed by Hawk and Dove. Their mission to hook up with the other three Titans and face off with Mr. Twister once and for all. Lilith shares her concerns about this tactic but Roy insists that he looks out for his friends.

On top of the tower; Donna, Nightwing and Garth come face to face with with Twister. Twister orders Mal to sing again. Mal insists that he is not Twister’s herald. Twister threatens to use Mammoth again, Garth responds by saying that Mammoth has been taken care of and the three prepare for attack. Mal says that the Titans cannot touch Twister physically and that is why he needs the Titans and Mammoth. Nightwing recognizes Mal. Twister is still able to manipulate Mal to start to sing despite his fighting the influence. When Mal approaches Twister’s device, Karen appears in front of him. She quickly attacks Twister which has an affect on him. Karen holds up Mal and tells him that he was singing for her to come, all she had to do was to learn to listen and when she was able to, she manifested her powers and came. Nightwing recognizes that Twister did get hurt so the three go on the attack with affect. Twister counter attacks but is shot in the neck with an arrow. We see that Roy and the other Titans have arrived. Throughout this exchange we hear the count of ten Titans showing up. Twister tells Nightwing and the others that there are six more coming when I can only count five. Karen does make the number ten but since her attack does have an affect, I do not believe that she is the tenth Titan mentioned here.

When all the Titans have arrived, Twister is able to use his influence on all of them forcing them to their knees and immobilizing them. He orders Mal to start singing again. All along Twister keeps referring to his opponents by their former names of Robin, Speedy, Wonder Girl, Aqualad, etc. Twister reveals that he needs the Titans in order to take on the Justice League followed by the Green Lantern Corp and the rest of humanity. His ultimate goal is to bring his master into the living realm. Nightwing identifies Lilith and asks her what Twister is talking about. She says that Twister serves something else and that is what is trying to come to the world. The Titans are to be the draw to bring this lord to the world.

Lilith says that Twister was able to corrupt them through their names and identities and the only way they were able to win was to forget who they were. Now Twister declares that they remember that they are the Teen Titans. Since forgetting was their salvation, now they have to find a new salvation. Dick declares that they are not the Teen Titans anymore. Dick declares that he is not Robin but Nightwing. Roy calls himself Arsenal, Garth the Tempest of the Seas. Donna Troy is the Fate of the Gods. Mal is not Herald. Karen was never there before. Lilith is not Omen, Gnarrk is the Hunter and Dawn Granger is the new Dove who never was controlled by Twister before. All of them have new identities or new avatars except Hank Hall, Hawk. He was Hawk in the past and he still is now. The other Titans are now freed except for him. Twister focuses his attention on Hank, with him he still has dominion. Nightwing declares that they are now the Titans and Dawn pleads for Hank to fight Twister. Hank hears a vision of Don Hall the first Dove and realizes the Twister killed the first Dove. This gives him the strength and the ability to fight back. The rest of the Titans move in for the attack and together they force Twister through the portal Mal opened and Mal sings a new song to close the portal. Karen suddenly goes into labor and Nightwing screams for Hawk and Dove to get her to the hospital immediately.

Back at the diner, the new Titans, some in costume are resting and taking about what will come next. Lilith says that the threat was beaten but not destroyed. They need to stay together and become the new Titans. Roy introduces himself to Donna. Nightwing says that the the baby and Karen are fine and Mal is with them with Hawk and Dove. He too is on his way to go as a matter of fact all of them should go. Garth says that Roy was talking about being a team and doing something. Dick thinks that is a good idea. Garth wanders who was the tenth Titan. All have been accounted for and Dawn replaced Don but who does Karen replace? All look out the window at a coming storm.

This is the last issue of the Titans Hunt miniseries. I will give my specific thoughts of this issue and my thoughts of the series as a whole.

I liked this issue, it was action packed and tied together a number of loose ends except the mystery of who is the tenth Titan. It was an interesting plot choice to have the Titans break Twister’s hold on them by remembering who they are and not who they were. Ironically it was their remembering that led to their victory. Even Hank finally remembered Don, the original Dove and that allowed his rage to take over so much so that Twister was not able to control him and the Titans were able to get their shots in.

Now for the series, I give it a three out of five because of all the extraneous issues throughout. This story was drawn out so much. We spend several issues in the clubhouse just talking and staring each other down. The process of bringing the team together just took too long and the whole previous issue was not needed. The only plot point I see coming into this issue was the arrival of Karen Duncan to the tower in the first place. The Diablo agents we spent all issue with was inconsequential, and the man Karen was talking to was also had no importance. Karen could have been brought in another way possibly having her look for Mal after he disappeared instead of being the poor damsel in the hospital. She proved capable in her attack of Twister to make such a plot point plausible. I liked the story and there is definitely a continuing point for a new ongoing series and I look forward to seeing where these characters go from here. It will be interesting story wise to have a baby in this mix and that is somewhat original at least for the DC Universe.