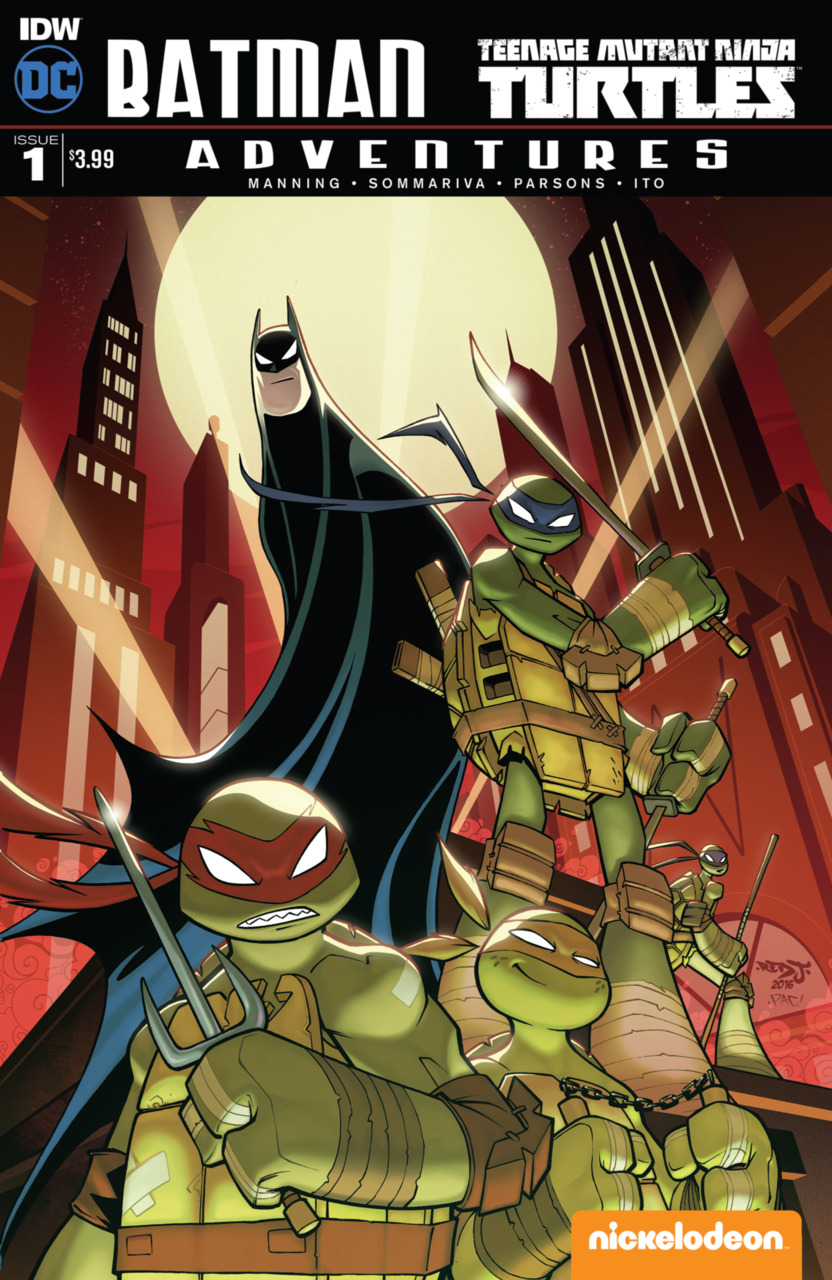 The story opens with the turtles stopping a random criminal in New York.  The story then moves to Gotham where Batman tracks Two-Face to an abandoned house. Two-Face is quickly subdued and speaks of having been to another world without Batman or even Gotham.  Meanwhile the Turtles go to investigate a portal being used, fearing it is the work of the Krang and end up fighting Clayface in the sewer. Batman goes to Arkham Asylum where many of the inmates have gone missing and Batman finds a strange energy signature left behind.  The issue ends with the Joker and Harley Quinn standing over a pile of Foot Ninjas and with the Joker telling the Foot to take him to their leader.

This first issue is very much an introduction and is all set up for wherever this story is going.   As a stand alone the issue is fairly paper thin. It’s a common problem with limited series in that they often work much better when you can read the collected edition rather then each individual issue.  The story clips along quickly and the issue is over before you know it.  I do take a little issue with the use, once again, of mystery portals bringing the characters from one world to another and it makes this story feel a little repetitive.  In the last Batman/Turtles crossover, it made sense as the story seemed to be somewhat in continuity with the current books, but in this series, where it’s a meeting of the animated characters from two self contained worlds, I wonder if that was really necessary again.  There’s nothing really in either animated series that would discount the other one, and I can help but wonder if the story would benefit from the writer not having to waste time explaining how it’s possible for the Turtles and Batman to meet. Personally I don’t really care how the characters are meeting as long as it serves the story and using the portal plot device, while not a terrible idea, has both been done before and feels a little like the writer is overthinking things.

Where the issue stands out is in the dialogue and characters. The writer, Matthew K. Manning does a great job of establishing the characters in their respective worlds.  The Turtles in particular stand out with Manning giving each of the Turtles a quick character beat before moving on with the story.  Having Michelangelo making thinly veiled Batman references is a great nod.  Batman and the rest of the animated series are well realized and it’s easy to hear the voices of Kevin Conroy, Richard Moll, and Ron Perlman behind the characters of Batman, Two Face and Clayface.  I love the decision to set this crossover between the current Turtles series and the first few seasons of the Batman series. It’s a welcome return to a classic interpretation of Batman and his world. I would love if this series drummed up interest in a new series set in the world of Batman: The Animated Series.

The art by Jon Sommariva is a stand out and he does a great job of blending the animated styles of the Nickelodeon Turtles series with Bruce Timm’s Batman designs.  It’s not distinctly the style of one show or another but suggests them both which is a nice magic trick. Batman and his world are particularly well realized. As someone who grew up in the 80’s and 90’s, I also dig seeing the return of the classic blue and grey, yellow oval Batsuit.

Despite the lack of a strong story the reverence for both the current Ninja Turtles series and in particular Batman: The Animated Series makes this a worthwhile read.  I’d highly recommend this for fans of either series.