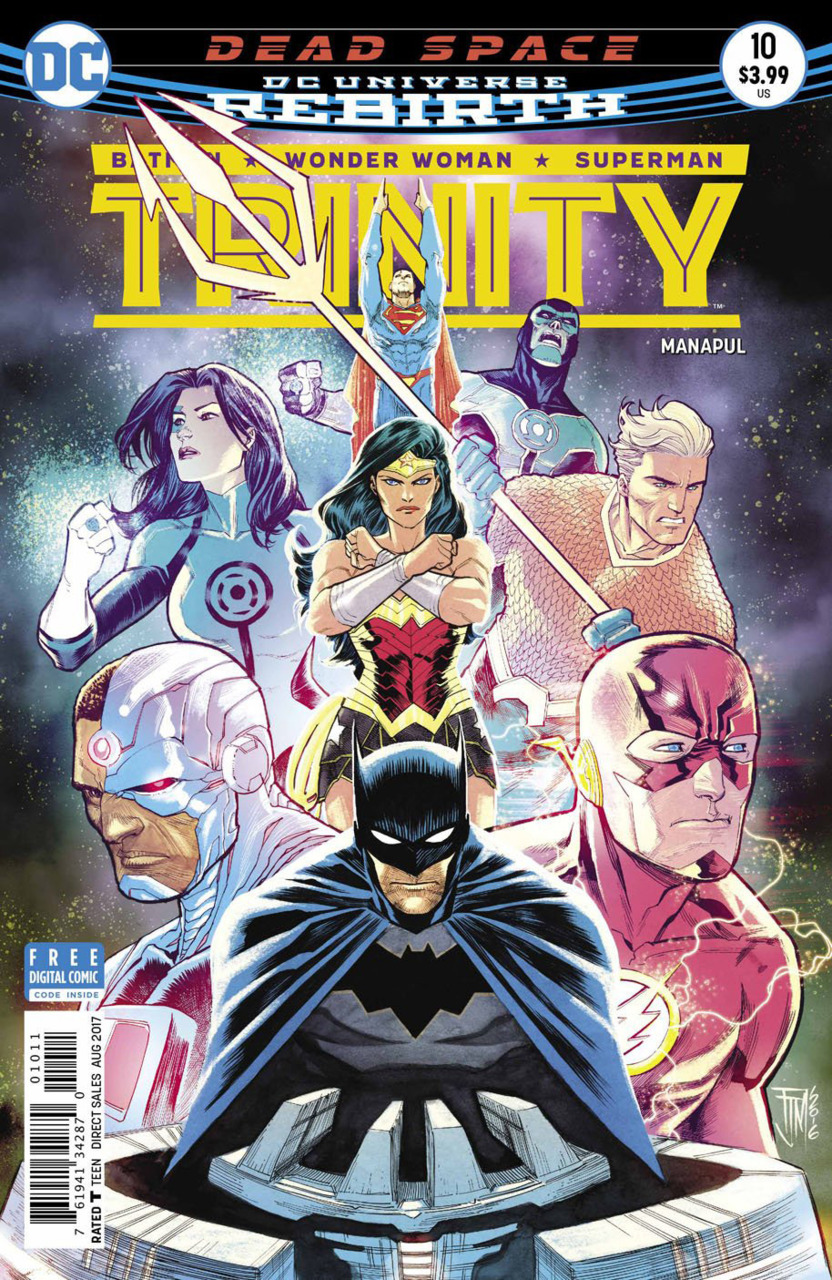 Overview: The Trinity fights to regain control over the Watchtower from seemingly parasitic aliens. As Wonder Woman and Superman interrogate the former jailer of these creatures, questions are raised as to whom they really should be trusting.

Synopsis (spoilers ahead): Part 2 of the Dead Space story arc picks up where the last issue left off with Batman and Flash attempting to revive Cyborg amidst a fight with their own League members. The League aboard the ship has been infected by alien parasites that use the League members’ bodies as vessels.

Batman’s plan to fix Cyborg in a regeneration pod is interrupted by an infected Aquaman attacking both him and the Flash. The pair notice that Aquaman is not using his full strength so the hosts are able to fight off some of the aliens’ control. After Flash notices this, Batman uses a taser on Arthur and reveals that the Flash’s theory is correct as Aquaman’s face appears inside the mouth of the creature. With only a brief moment of freedom, Arthur tells Batman and Flash to stop and that they must help “them”.

Meanwhile, Wonder Woman and Superman question the newly arrived alien who claims to know how to sop the alien virus. He explains that their friends and Watchtower are doomed but that they still need to save the Earth from the ever descending Watchtower. The “Traveller” states that they need to restart the Watchtower so that his ship siphon off the Watchtower and initiate its self destruct protocol to eradicate the virus.

Back on the Watchtower, Batman and Flash are still reeling from Aquaman using his moment of freedom to tell them to help an ambiguous “them”. The pair wonder if these parasitic aliens are in fact, the ones who need their saving. Their theories are cut short as Aquaman continues to fight the Flash. In an effort to give Batman the time to save Cyborg, Flash vibrates himself with the infected Aquaman out of the Watchtower into space.

Superman leaves Diana with the Traveller while he goes to stop the free falling Watchtower. As he struggles, the infected Green Lanterns appear to his right and left and both tell Clark to “save us…save them”.

The issue ends with Wonder Woman finding a chamber within the Traveller’s ship that houses the carcasses of hundreds of these parasitic aliens. Horrified by what she has seen, Diana suddenly is overwhelmed by the virus and transforms into one of the creatures.

Thoughts: Unfortunately, this was the weakest of the Trinity issues since Rebirth for me. Not to say that this was a bad issue, but it just did not really measure up to the past issues. It felt crazy and wacky as far as the plot goes. Manapul is putting together a fun alien invasion story. There is not much depth really in this story. It did its overall job of moving this story forward, even with some pretty glaring foreshadowing that is pretty hard to miss. It seems to be a classic story of the initial villains about to be revealed as the true victims. It still can make for an exciting adventure for the Trinity and bring them even closer together.

The artwork helps elevate this issue as with most issues drawn and colored by Manapul. His warm color pallet makes this feel like a relatively light, fun comic that I don’t need to feel emotionally invested in. We get to see him play around with other League members and their new Rebirth looks (though not much different than the New 52 looks) which is always fun to see an artist expand past the initial cast and loop in other side characters.

Again, it doesn’t hold up too well compared to some of his other issues that have explored the motivations and personalities of each of the Trinity members but its still a fun read.