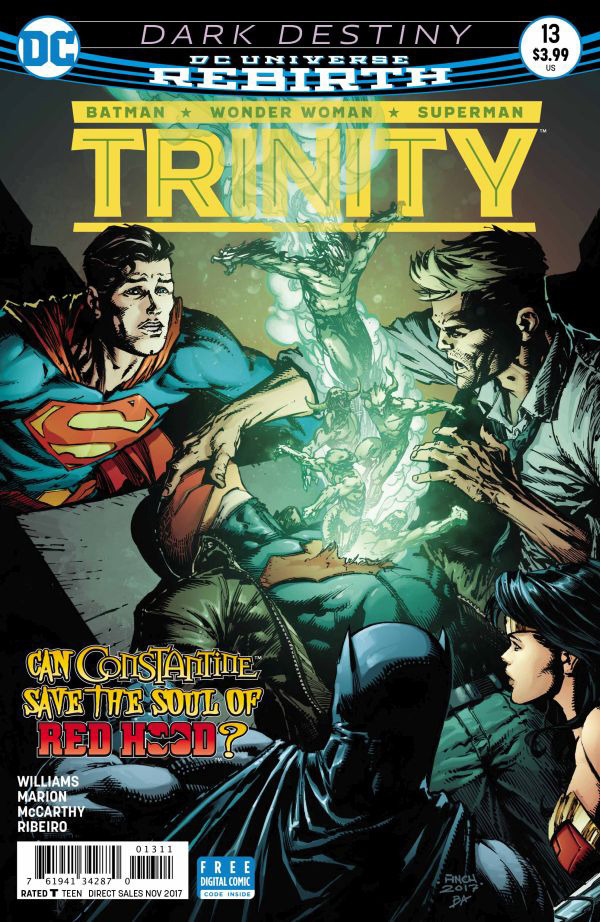 Overview: The Trinity continue their fight against the possessed Dark Trinity (Red Hood, Artemis, Bizarro) while Constantine goes looking for Zatanna, Deadman and the Pandora Pits with mixed results.

Synopsis (spoilers ahead): The issue opens with Batman reminiscing about how lucky the world is that good people found Clark when his ship crashed onto Earth because the world never got to see Superman “gone to the dark side”. Meanwhile, the Trinity continue their battle against the possessed Dark Trinity. A possessed Red Hood tries to get under Batman’s skin by taunting him about the fractures in his relationship with Jason.

The Trinity hold their ground, forcing the possessed Dark Trinity and the tiny red demons to flee into the city and start attacking the people. Wonder Woman suspects that there is more to Circe’s plan than simply sacrificing the three of them to gain the power inside the Pandora Pits.

Meanwhile, Constantine falls through a magic portal into a snowy mountain range where he lights up a cigarette and fights a large demon. He wins using magical misdirection and proceeds to the Pandora Pits where he spies Circe and Ra’s Al Ghul observing Zatanna and Deadman who are suspended in the Pits. Constantine reveals himself when Ra’s al Ghul threatens to kill Zatanna.  Ra’s then stabs Constantine in the heart after Circe tells him to.  Circe says she has the power to heal Constantine if he proves himself worthy of her help.  Constantine eventually appears to relent and suggests that he can give Circe the Trinity by using Deadman.

Back in Gotham, the Trinity have finally subdued the Dark Trinity when all of a sudden Deadman appears by coming out of their mouths.  Batman tells Wonder Woman to quickly use her lasso on Deadman, but it’s too late because Deadman has already possessed Superman.  A now possessed Superman advances menacingly on Batman and Wonder Woman while Batman reflects that Superman has always held back…until now.

Analysis: Part two of the Dark Destiny arc definitely feels like a “bridge” issue as most of the issue is devoted to the fight between the two Trinities.  The status quo of the story arc at the conclusion of this issue isn’t all that different from the end of last issue, with the exception of Constantine being much closer to a place where he can directly impact the story.  The star of this issue for me is Constantine and his dialogue.  I think Williams has an excellent measure of the character and writes Constantine so that the reader can laugh at his jokes but also simultaneously feel the other characters’ disgust for him.  In this particular issue, Constantine’s dialogue is rife with cool pop culture references, from Star Wars to De La Soul, while also fitting seamlessly into the story.  I actually laughed out loud when Constantine called Ra’s al Ghul “Peter Cushing’s dirty uncle” and when he said that Botox was working for Circe.

The art in this issue is bright and smooth. Drawing facial expressions of characters that are possessed and making them expressive can be challenging, but V Ken Marion’s pencils rise to the challenge.  The detail in the backgrounds of the panels involving the fight in Gotham is also especially commendable.  The inks by Ray McCarthy are also good throughout, particularly on the pages with Batman and the possessed Red Hood in the basement.  I enjoyed the black and red lettering and the speech clouds with the jagged outline used for the possessed characters.  Sometimes the text in Wonder Woman’s text boxes would be partially obscured by her logo in the top left hand corner making the first word or two a little more difficult to read, but this is a very minor critique and doesn’t detract from the reader’s experience.  The colors are vivid and really jump off the page particularly the red in Superman and Wonder Woman’s costume.

I do want to briefly elaborate on something that bothered me about this issue.  I said earlier that I got a laugh out of Constantine referring to Ra’s al Ghul as “Peter Cushing’s dirty uncle” because it was really amusing.  However, in my humble opinion, this depiction is inaccurate.  Ra’s al Ghul is a character whose origins are in the Middle East and he should therefore have a complexion that is distinguishable from that of John Constantine’s.  This is something that also happens in other books, but as I am reviewing this particular issue, it is something I would respectfully request the creative team consider in future projects involving the character.

Going forward, I’d like to see how Luthor factors into everything.  One of the themes so far is that he’s the missing third party to one of the trios and he hasn’t really appeared on panel thus far.  It will also be interesting to see what Constantine has up his sleeve, because he usually has a way of throwing a wrench into everything.  Hopefully the second half of the arc also leads to some meaningful conversation between the Trinity and their Dark counterparts, possibly reconciling any lingering emotional hurt or resentment between them.  In the case of Bizarro and Artemis, hopefully they can establish some type of cordial relationship with their more popular counterparts as, to my knowledge, they do not have really have the same type of connection as Bruce and Jason have within the Rebirth continuity.

Final Thoughts: Not every meal you want in life has to be at a five star restaurant.  Sometimes you just want a nice solid burger and fries.  That’s kind of how I feel about this issue.  It’s a solid, but unspectacular issue.  It sticks to developing the story line and doesn’t make any mistakes in the narrative or art.  I’d personally like to see a story line involving both Trinities without magical influence, but this story arc is doing a decent job of working the magical element into things.  In some ways it is reminiscent of the Justice League Dark animated movie that came out earlier this year.