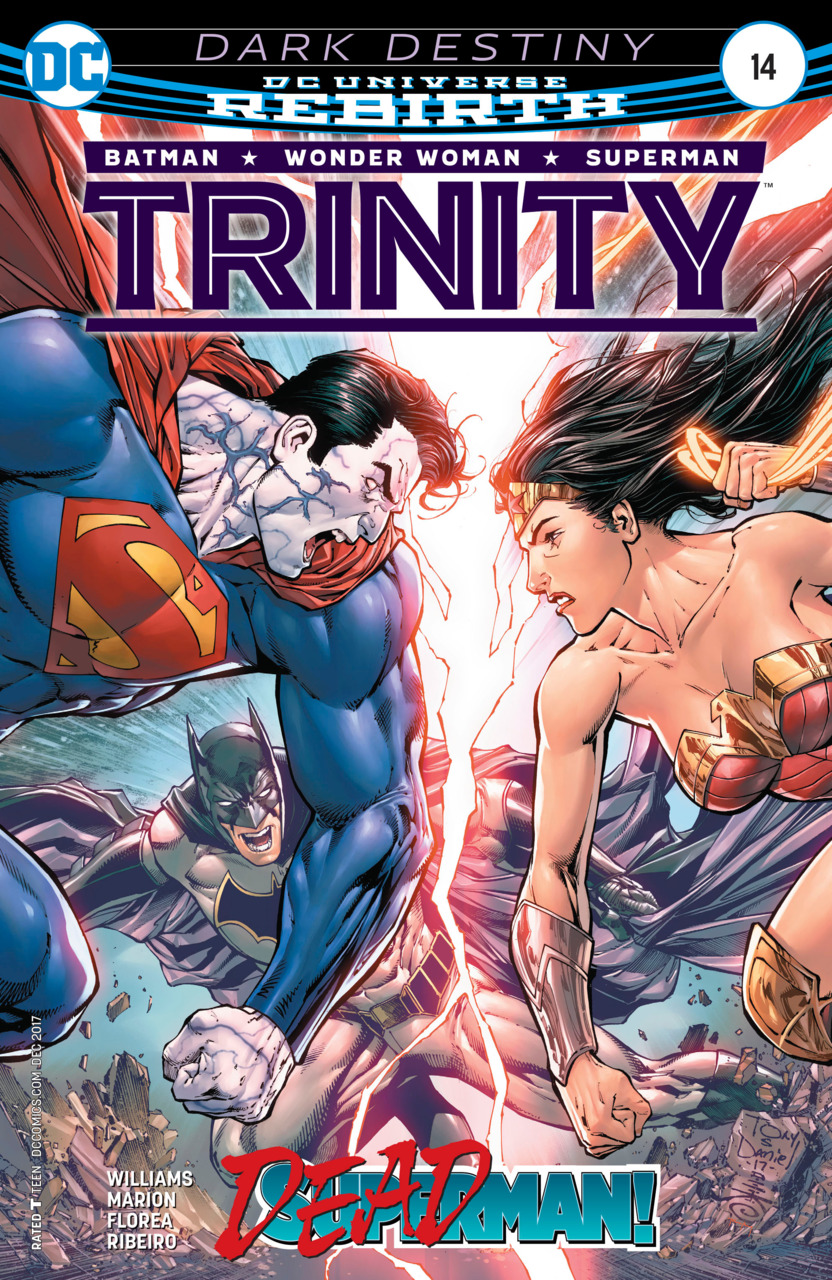 Overview: Circe reveals her true plans while Batman finds a way to try and save the day.

Elsewhere, Constantine appears near death as he continues to try and play head games with Circe. He is magically healed by an incapacitated Zatanna who Circe then sacrifices to the Pandora Pits. A possessed Zatanna appears back in Gotham and magically transports Superman, Bizarro, Wonder Woman and Deadman to a location that is presumably the Pandora Pits.

At the Batcave, Batman eventually comes to the conclusion that he needs to “kill” Red Hood to free him of being possessed. He’s about to do this when Bizarro crashes in, but he is quickly subdued by Batman.

Back at the Pandora Pits, Ra’s al Ghul expresses his impatience to Circe before he is also sacrificed to the Pandora Pits. Circe reveals that she is alone and is doing all this to regain her soul from a dimension of hell.

Analysis: The third issue of the Dark Destiny arc finally reveals the true motivations of Circe. It appears that she was not telling the truth about needing Ra’s al Ghul and Luthor. I mentioned in my previous review that I wanted to see how Luthor factored into everything, but it appears that we won’t be seeing that. Ra’s al Ghul being thrown into the Pits also raises some questions for me. If Ra’s al Ghul served no purpose to her and Circe was going to throw him in the Pits, why didn’t she simply do it earlier? It also feels like there are too many people being possessed. I don’t know if I’m making any sense by saying this, especially about a story featuring magical elements, but seeing Superman possessed by Deadman who is also possessed was a little odd.

I think this issue continues to show that Williams understands what these characters are made of even if my interest in the occult nature of the plot has cooled somewhat. Constantine was the star of the last issue, but in this issue the stars are Wonder Woman and Batman. Wonder Woman telling Batman that she would bet her money on his intelligence over any magic and telling him Gotham is under her protection underlines the complete faith she places in her closest friends and highlights the unbreakable friendship between these characters. When she uses a sword to draw a line and swears to her foes that they will not cross it, it speaks to her incredible courage and the heart of the warrior within her. Batman taking exception with not being considered one of the two most powerful of the Trinity also reminds us of his iron will to always use every ounce of his skill to make a difference despite being in a world of powers and magic. Even though Superman is possessed and is therefore not himself, Wonder Woman referring to him as the kindest soul she has ever known emphasizes the light and compassion that represents the core of the Superman character.

The art has been really good for the entire arc and that continues with this issue. It’s a weird thing to fixate on, but I have to compliment the attention to detail in the backgrounds of these panels. It really helps immerse me even further into the story. I’m also a big fan of how V Ken Marion draws Batman’s cowl and his rendition of the Batmobile also looks very sleek and powerful. Riberio’s colors continue to be vibrant and many of the action panels crackle with energy.

Final Thoughts: In my opinion, the plot appears to be unraveling a bit in this issue. However, the dialogue and character dynamics continue to be very strong aspects of this arc. The art continues to be excellent and there’s also lots of great action and fight sequences. I’m optimistic that the arc can close on a higher note and tie up some loose ends.