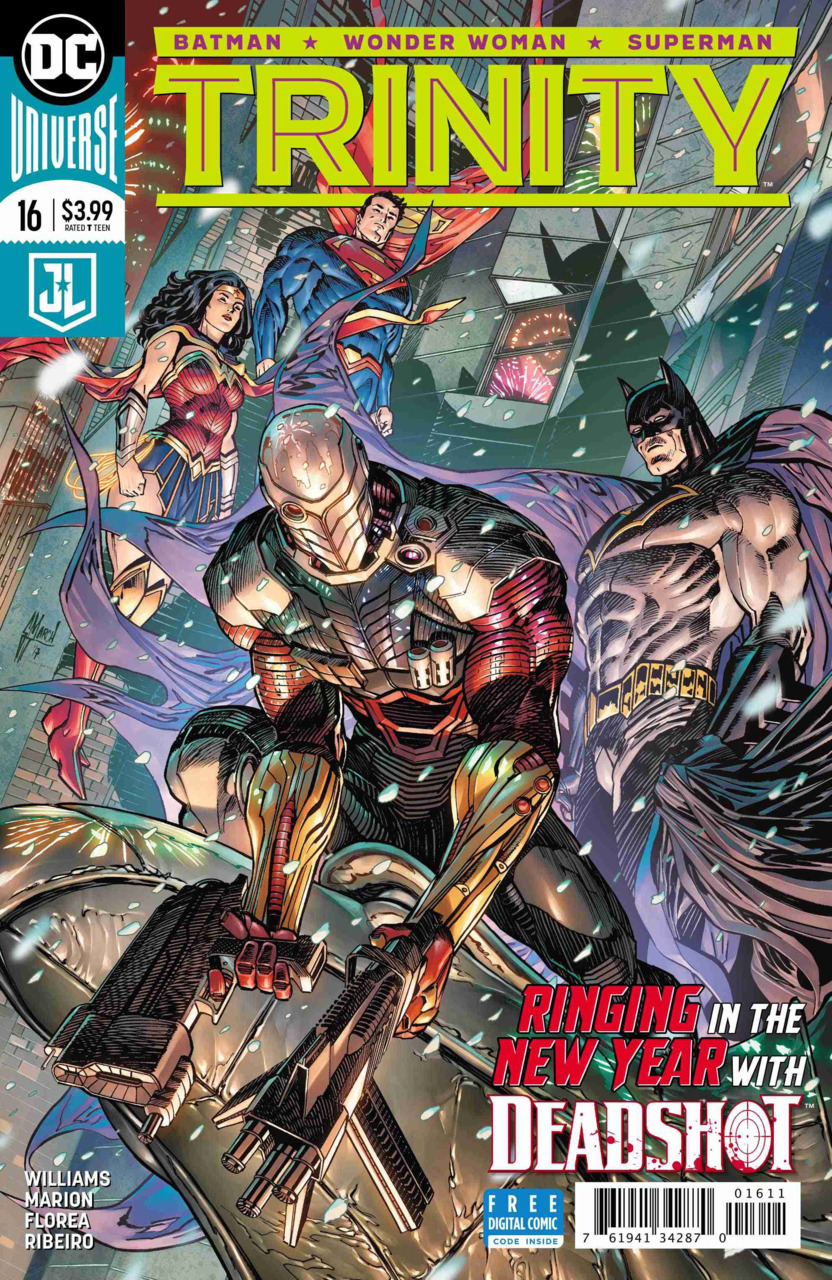 Overview: The Kobra Cult has kidnapped Deadshot’s daughter Zoe on New Year’s Eve as revenge for killing their leader. The Trinity, at the behest of Batman, work with Deadshot to find Zoe.

Synopsis (spoilers ahead): Batman intercepts and engages a Kobra van driving in downtown Gotham. One of the Kobra members takes a pill that transforms him into a mutant reptile. The mutant Kobra member seems to be getting the upper hand in the fight with Batman when Deadshot intervenes and says he won’t be sidelined anymore because Kobra took his daughter.

Batman and Deadshot realize that pursuing the vans is a wild goose chase and that the New Year’s Eve celebration near Times Square is the real target. Back at the Wayne Entreprises party, Lois and Steve Trevor are dancing when three Kobra members transform into mutant reptiles and start creating mayhem. The Trinity arrive and easily subdue two of the mutants. The third mutant has a quantum bomb that is wired to his heartbeat and set to go off at midnight. As the countdown ticks down and the Trinity seem to be having no effect on the bomb, Deadshot fires a sniper rifle from a distant rooftop and kills the mutant. Superman then throws the bomb into the sky so that no one is harmed.

Deadshot defends his decision to kill the mutant to the Trinity and says that he’s going to continue to search for his daughter by killing every Kobra member. Batman reiterates his promise to find Zoe and, under the influence of the Lasso of Truth, Deadshot admits he deserves to be locked up and advises the Trinity to spend time with the people they love.

Analysis: I don’t think the tone of this story meshed well with a holiday themed one-shot issue. Instead of a chase story, a story that featured more light-hearted character moments that explore the Trinity’s relationships would have been more appropriate. In my opinion, the best parts of this issue are the three character monologues that the Trinity get, and the conversation Clark and Diana have at the party about Bruce. Diana’s monologue reminds us of the importance of living a life that is about caring for others. Clark’s monologue touches on fatherhood and the joy and sadness of seeing a child grow up. Bruce’s monologue mentions regrets, the value of time and holding onto the moments of happiness that we have. These perspectives are all part of the characters and something that readers can relate to during the holiday season.

Unfortunately, this story does not seem to have a logical plot. Kobra has captured Zoe as a means to exact revenge on Deadshot and Batman but their plan inexplicably gives Deadshot and Batman time to find Zoe and try to save her. Everyone eventually realizes the whole plan is a ruse to detonate a bomb and they arrive in time to save everyone, but they mysteriously can’t do anything with the bomb. The mutant remarks that Superman is not strong enough to fly him away while Wonder Woman’s strength also apparently has no effect. However, after Deadshot shoots the mutant with the bomb, Superman is able to rip the bomb off the mutant and throw it into the sky. The whole event seems contrived just to get Deadshot to kill someone. I’m not buying that Superman isn’t strong enough to fly the mutant out to begin with. The ending of the story is also really abrupt and not necessarily a true ending. Zoe is still in the hands of Kobra, but no one outside of Deadshot seems to be exhibiting any urgency to go find her. I don’t know if this is going to be addressed in the Suicide Squad series, but it seems like a really odd place to leave things. There’s really no pay off at the end of this story.

I enjoyed the artwork and V. Ken Marion’s take on a snowy Gotham City. The panel on the first page of Batman looking out over the city with part of the Gotham skyline behind him is beautiful. V. Ken Marion’s Superman and Wonder Woman look just as bright and powerful as ever and his Deadshot looks like a deadly killing machine. I’m glad we got a panel where Deadshot showed his face because it further humanized him in his search for his daughter. This probably would have worked really well at the end of the issue when Deadshot is being held by the Lasso, but his face is hidden behind his helmet.

Final Thoughts: Not a lot of holiday spirit or payoff in this one shot story. It feels like a missed opportunity because this is a team book and Deadshot’s relationship with his daughter is one of the more complex parent-child relationships in the DC Universe. I’m interested to see what a new creative team will bring to this series starting in 2018.