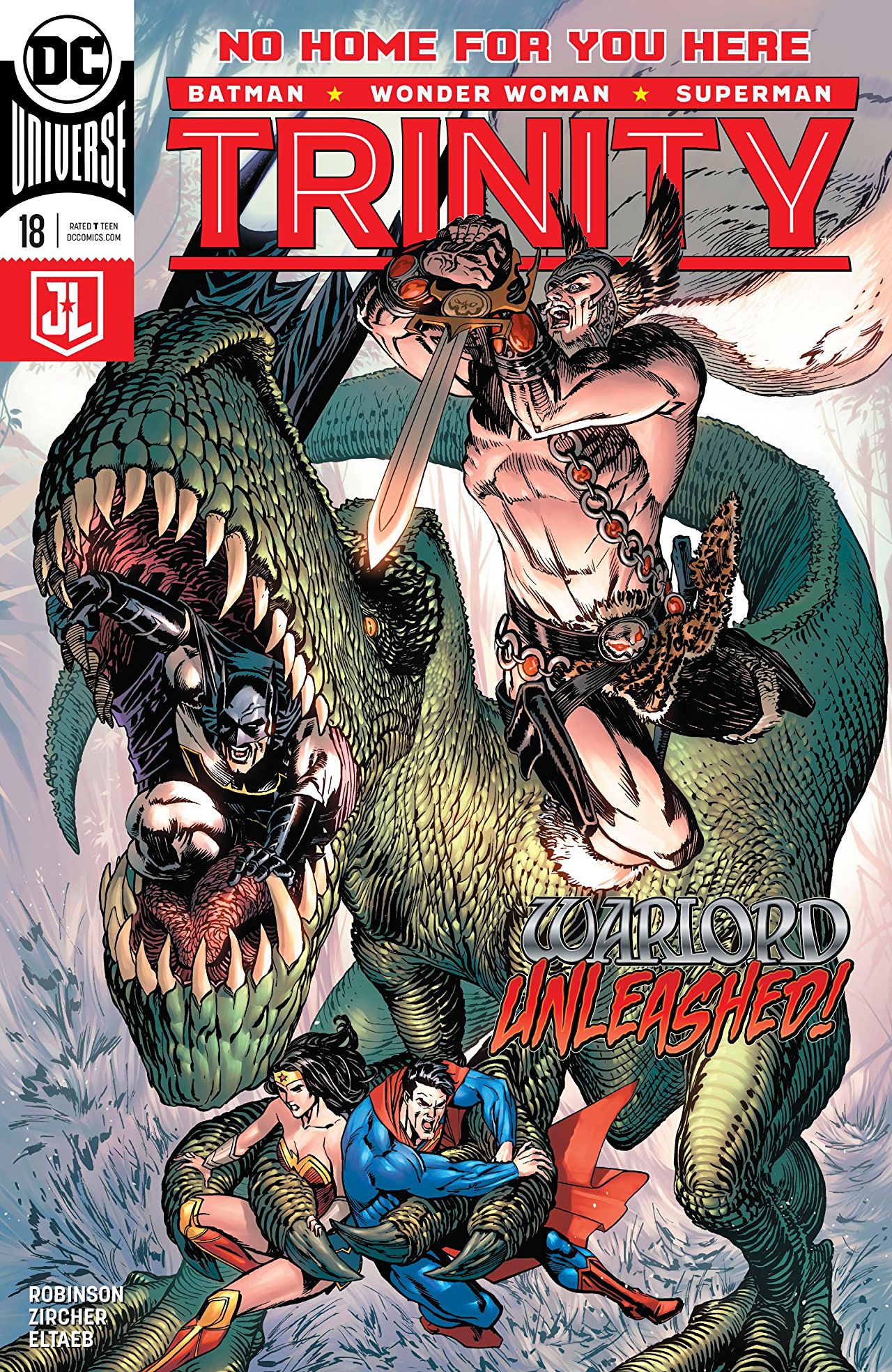 Overview: The heroes continue their interviews about their latest adventure through Skartaris.

Synopsis (spoilers ahead): Continuing from the last issue, we see the Trinity interviewed about their latest quest through Skartaris.

The Trinity meet a warrior who is a magical projection that was conjured by his daughter who is a long way away. He tells them that Deimos, his enemy, lays siege to his kingdom. He asks them for their help and they strike a deal. If they help them with the siege, then he will help them return home.

Next thing we realize, the heroes are under attack by the minions of Deimos. Clark gets struck by one of these creatures and falls. The team quickly realizes that he lost his powers and Diana flys (still blind) to catch him.

Clark and Diana state that “if Batman has a flaw, then its that he sometimes forgets, or chooses to ignore, that he doesn’t have superpowers at all. ” Clark, now powerless, asks himself what he should do: enter the fray or stay on the sidelines. He pretended that he was Batman to defeat the enemies.

Bruce, while fighting, notices (because of course, he is Batman.) aged people in military uniforms dead. He postulates that they died of old age.

A projection of Jennifer Morgan, the warlord’s daughter, appears to the Trinity imploring that they hurry to the city, for she needs their help. She tells the heroes that time is fickle in Skartaris, it is rarely an ally.

The Trinity ride on horses across the terrain of Skartaris to the city. They dismounted when they reached the Lake of Dreams. They fly across the lake to the besieged city. They meet Jennifer on top of the castle’s walls. She tells them they will not have much time to help the castle dwellers because they have aged into old people.

Analysis: James Robinson wrote a very quick, enjoyable issue. I am extremely curious about this arc because I do not know who the Trinity is recounting their stories too. We read that Diana, Bruce, and Clark use each other’s first names while telling their accounts to their mystery interrogator. Thus, it must be someone they mutually trust. Now, who is it?

Aged Batman, Superman, and Wonder Woman…I am curious how the heroes will overcome this dilemma. Jennifer said multiple times that her magic is weakened by the power of Deimos. I am not sure how they will recover their youth.

The characters were written in a new, refreshing light. Batman was Batman in this issue (as always). Superman, was comical because he pretended to be Batman. Even in comics, people pretend to be Batman so that they can overcome their struggles and be brave. Wonder Woman was unbelievable because she is still blind throughout this ordeal but she fights as excellent as ever. It really shows that Diana is more than an expert warrior who matches the strength of Clark with the fighting prowess of Bruce.

The art team of Patrick Zircher and Gabe Eltaeb did a fantastic job in this issue. With all the craziness of this issue from the landscapes of Skartaris to the forces of Deimos, this issue was truly beautiful.