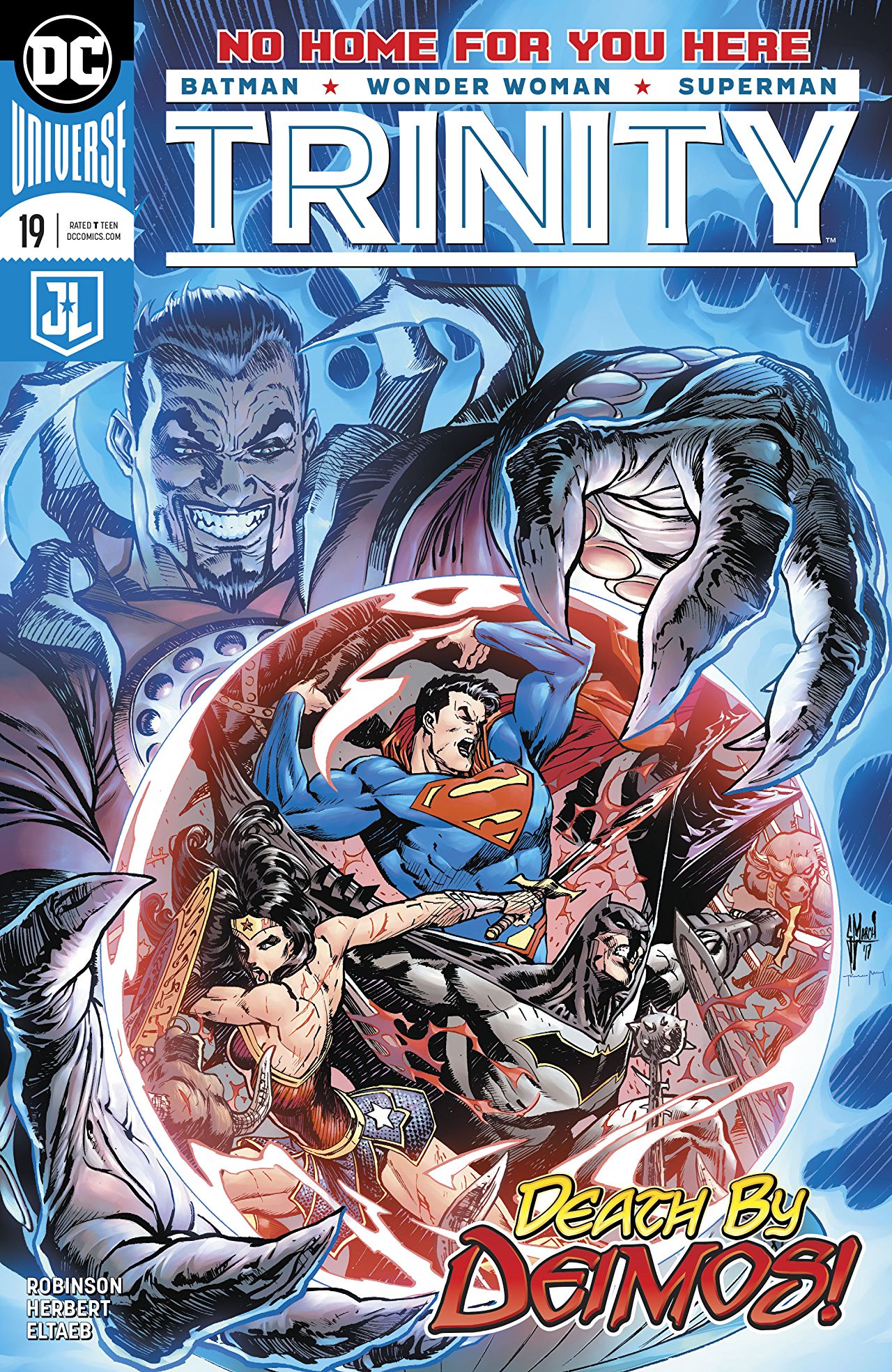 Overview: We see more of the Trinity’s quest through Skartaris, and their mystery interviewer is revealed.

Synopsis: (spoilers) Bruce, Clark, and Diana continue their debriefing with their interviewer, Steve Trevor. Steve presses Diana for more information because A.R.G.U.S. is interested in Skartaris.

They continue their debriefing and share that Jennifer Morgan, the Warlord’s daughter, reversed the magic that aged them. She reveals that she blinded Diana and weakened Clark to make the Trinity appear weak. (Well, Bruce is just a man, hence he was unaltered.) She manipulated them so that Deimos would focus his attention on them (being easy prey) so that Jennifer and her forces could plan and build up their defenses.

Bruce, always suspicious, questions Jennifer about her adversary, Deimos. For all the talk of their enemy, the Trinity have never seen Deimos himself. Bruce wants to make sure that Jennifer is a friend and not foe. Jennifer complies with his demand and conjures a construct of Deimos.

Clark is still confused about how his power was stripped and how she is able to restore it. Jennifer takes the Trinity down a hatch and reveals that Skartaris was once apart of Atlantis. With a mixture of Atlantean science and her magic, she was/is able to manipulate his power.

Bruce asks what their purpose is in this conflict and Jennifer wants them to repel Deimos’ forces at the outer wall. Before Bruce’s question about the men with the bird emblem they found earlier, Diana assembles the Trinity to enter the fight.

As each member of Trinity recalls the fight, they each have a slightly different memory of the battle. Diana enjoyed the fight and shares that a “battlefield – a righteous battlefield – that is my paradise,” and “It smells like glory.” Bruce and Clark have a vastly different memory of the battle. Clark’s position is “everything that Diana said, I probably wouldn’t. It was bad.” While Bruce recalls it being “hell on Earth, and I live in Gotham City.” Bruce also says the battlefield smells like a “stockyard and slaughterhouse”, while Clark agrees and states that he has “been to Apokolips and it wasn’t as bad as that (the current battle).”

As Bruce is fighting, he ponders all the unanswered questions he has about this place. He questions how Travis Morgan (Jennifer’s father) died and why he is called the Warlord. At that moment, Travis comes flanking Deimos’ forces and seizes the victory. Bruce fights a guy with guns, very outside the norm for Skartaris, and questions who he is and his intentions. The man kills himself to avoid capture.

The Trinity realizes that the Morgans used them as bait. Instead of staying for the celebratory feast, the Trinity head back to earth through a portal that Jennifer created.

Steve refuses the notion that Diana’s debriefing is over and further questions her about the Atlantean computer chamber, the time device, and the mercenaries of Blue Strike Security. Diana and the rest of the Trinity realize that they never told him who those men worked for. They realize that Steve is an impostor and Deimos has been questioning them the entire time.

Analysis: This issue is complete fun!

The art in this issue is once again incredible. From the computer chamber to the Trinity’s fights against Deimos’ forces, the art team did superb work. Often in comics, the faces tend to be either bland or inconsistent. I enjoyed how the faces were consistently drawn well, particularly Steve Trevor’s. If you happen to read Wonder Woman (I know, this is a Batman site…), you will notice that his face in that series is wildly inconsistent. It is refreshing to see the detail that the art team put into this issue.

One interesting observation, throughout this issue, Diana’s and Clark’s hair is blue. Not a bad thing, just interesting.

I think James Robinson has a great grasp on the Trinity. He has a good take on each character, and he writes them organically. What I mean is, Robinson writes the team working together in a natural way to where we see them working as one unit due to their experience with one another. One member does not overshadow the other. In the JLA book, Batman overshadows that entire team. He also does that in the Justice League book as well, but not to the extreme in JLA. To me, that is an important skill when writing the Trinity. Each member is THE alpha dog in their respective corners of the DC Universe. For that reason alone, I think that Robinson did a great job in this issue.

For me, this issue is great for the subtle comedy in Diana’s, Bruce’s, and Clark’s recounts of their battle. Diana, the warrior that she is, enjoys every single moment of the battle to the point where Bruce comments that she was spectacular and resolute against the onslaught. Bruce and Clark share a comedic beat when they describe the battle. From the “hell on earth” comment by Bruce to the smell of Apokolips comment by Clark, it is incredibly entertaining to see the Trinity show their individual personalities in a fight. The humor gave this issue the right amount of levity for the gravity of their predicament.

The plot twist at the end with Steve actually being Deimos caught me by surprise. As a reader, I had no clue what was going to happen, thus I enjoyed it. I think that plot thread will lead to an extremely interesting conclusion to the arc.

Overall, I am highly impressed with the writing of this issue and Robinson’s take on the Trinity.

Final Thoughts: It is an incredibly fun issue with a crazy plot twist at the end. You should read this arc for the sheer fun of it.