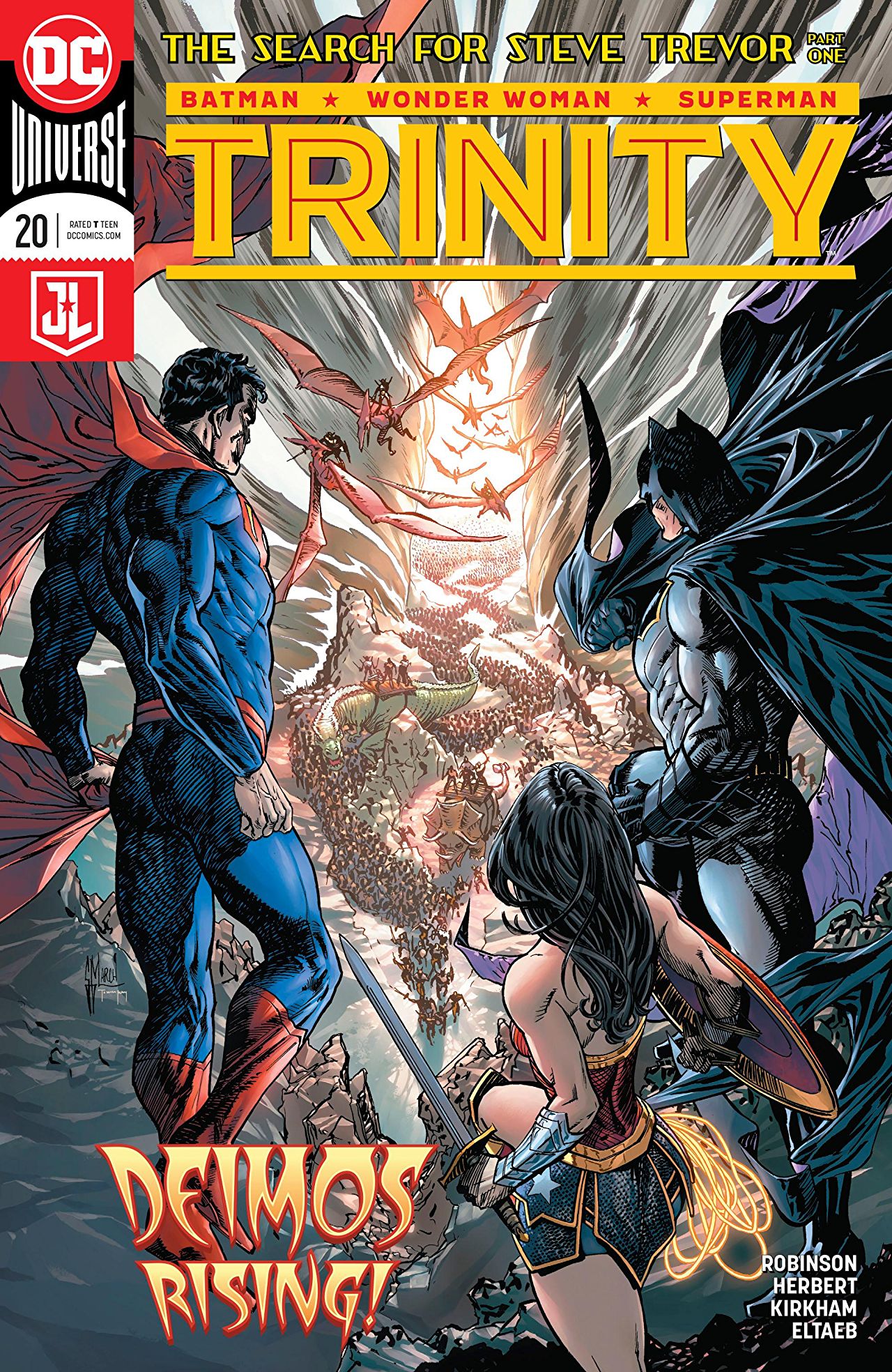 Overview: Diana, Bruce, and Clark are in pursuit of three data codes that might lead to an imprisoned Steve.

Synopsis (spoilers ahead): The issue begins with Steve Trevor running away from an unknown threat. After being captured, he realizes his captor is Deimos. He tricked Steve into investigating Skartaris so that he could use Steve as bait to draw out the Trinity.

Diana, Bruce, and Clark, knowing that Steve has been captured, each search for him. With Bruce’s detective work, each of them are at Blue Strike Security bases: Diana in a remote part of the Sahara, Clark in space, and Bruce in Dallas. Bruce states that three important pieces of data are separated among the remote sites that the Trinity members are. He hopes that with these data pieces reunited that they are able to locate Steve or at least understand how Blue Strike Security and Deimos are working together.

They set off their respective locations proximity alarms. Realizing that the enemy knows, each gets ready for Blue Strike’s counter-attack: Diana faces a massive robotic sphinx, Clark engages a hoard of robotic wasps, and Bruce fights a gang of mechanical apes. With each hero taking down their respective foes easily, they enter into the hidden bunkers underneath. They upload their data, and Bruce realizes that they have three encrypted data codes. He says that two of them are latitude and longitude coordinates for a fourth location. He also tells Diana and Clark that the third code is a time, evidently, the base is magical and teleports twice a day. Thus, the timestamp is crucial to locate this base.

In the jungles of Papua New Guinea outside the perimeter of a defensive stronghold, the Trinity plans out their attack on this Blue Strike Security facility. Diana, always the warrior, is anxious to get into the facility and free Steve. Bruce tells Diana and Clark to stay calm and study the perimeter defenses. From the rear flank, a monstrous Steve, and other hellish creatures rush upon the Trinity.

Analysis: This is a really fun issue! It shows the different side of the Trinity’s relationship with one another. Robinson writes the Trinity as a well-functioning unit who has served together for many years. With the witty banter during the fights to the sincere care for each other when each is under attack, you see the deep connections that bind them. Their chemistry is the highlight of this issue, and Robinson wrote that masterfully.

I think it is awesome that Clark, at the beginning of their rescue mission, tells Diana that of course, Steve is their friend. They are investigating Blue Strike Security, not necessarily for justice’s sake, but for her and Steve. In the first arc, we had Lois supporting the Trinity and helping Clark. Now, they are helping Steve. We usually see the Justice League act as a team, but this issue highlights why the Trinity, being a family, is the bedrock of the League.

The art in this issue is once again fantastic. I know that this art team was challenged since they had to draw multiple different locations and unusual foes for each member. (I spy robotic monkeys!)

Overall, I had a lot of fun reading this issue and I am excited for what is to come. I am still curious how Blue Strike Security, the Trinity, and Skartaris are all connected!

Final Thoughts: It is a lot of fun seeing the Trinity banter with each other during a battle. However, it is a pleasure to see them act not just as teammates but as a family.