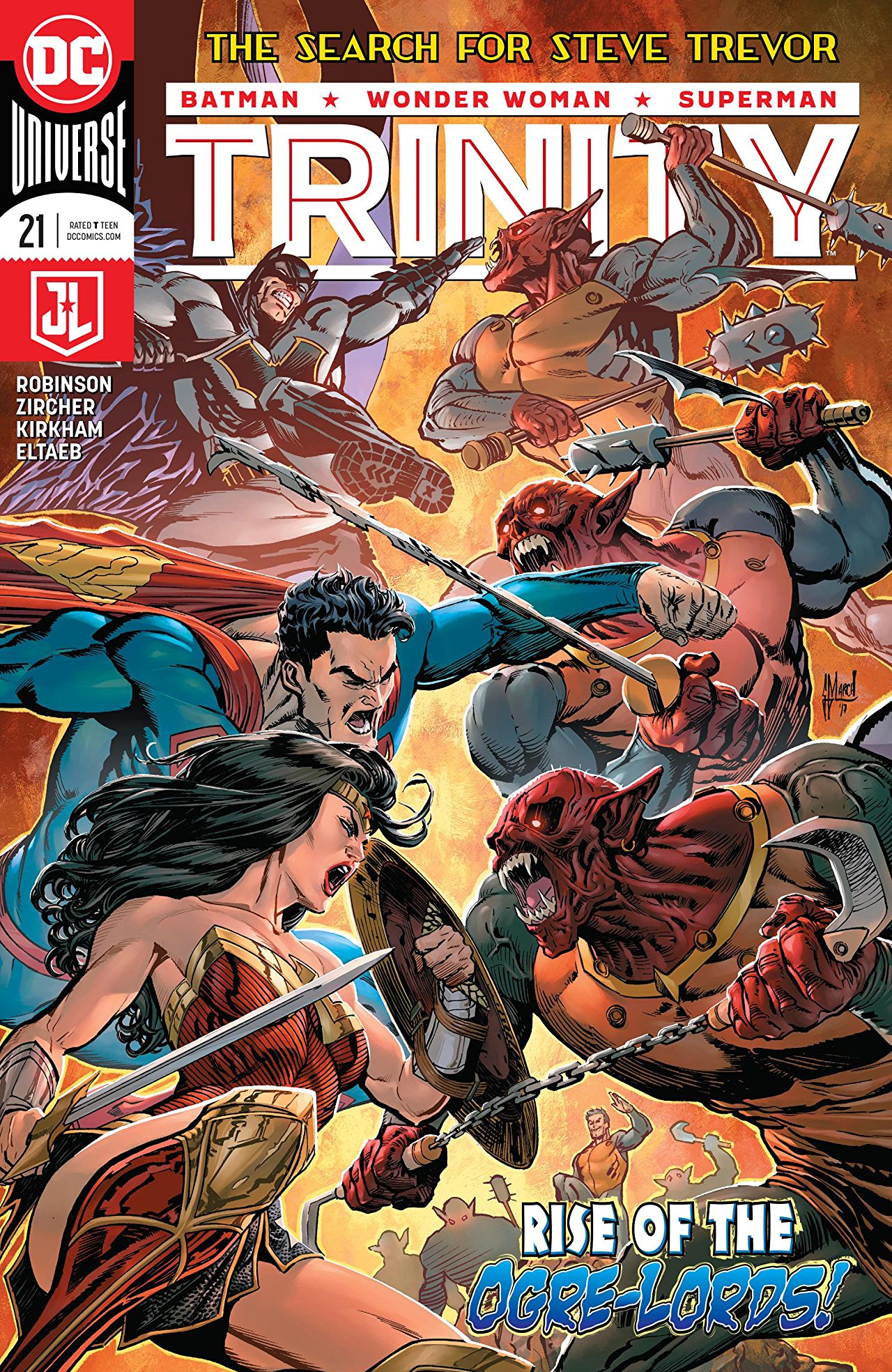 Overview: The Trinity continues to uncover Deimos’ agenda and the mysteries of Blue Strike Security.

Synopsis (spoilers ahead): This issue jumps back and forth in time, so I will split this synopsis into two pieces.

Here is the story set in the past:

We are back where we were two issues ago in Skartaris. In the halls of the castle after the defeat of Deimos’ forces, we see the Trinity converse with the citizens and leaders of Skartaris. Travis thanks the Trinity for their help, and comments that in Diana’s search for Themyscira, fate has intervened and brought them to Skartaris. Bruce confronts him about his lies and treachery. (Remember, he de-powered the heroes – except for Bruce – and lied to them so that Deimos’ forces would be focused on them, and not on Travis’ forces.) Bruce deduces that there is something deeper going on.

Bruce walks with Jennifer discussing her betrayal of his friends. Suddenly, he recognizes something that is from Earth. She warns him that Deimos is not a guy to underestimate; if he is not in Skartaris, then he is causing evil elsewhere.

The Trinity confronts the monstrous versions of Steve and the other heinous creatures. Diana reassures them that they should attack these creatures with full force; Steve would expect nothing less in the pursuit of justice. Bruce uses the gas that he created during “Night of the Monster Men” to knock out the creatures.

With the heroes now free, they head into the Blue Strike Security facility. At the vault door, they face heavy resistance from Blue Strike’s forces. With Bruce finishing off the last of the security forces, Clark and Diana take the vault door off its hinges. In the vault, the Trinity stumbles upon a massive collection of magical artifacts. He states that this collection is new and that there should be other guards guarding the facility. At that moment, a magical portal appears with Travis’s forces at its entrance from the other side. Deimos then binds Bruce and Clark with magical binds, leaving Diana to fight the monstrous creatures alone.

The three Moirai are:

Those are the three fates, and those are not women I would want to mess with.

I really enjoyed the art. The colors were perfect for the story and the penciling was spot on. With all that was happening in this book, the art team rose up to the challenge.

I think Robinson wrote another good story. I like his take on every character and the overall plot. I like how Clark and Bruce encourage and support Diane through this ordeal; with Steve being a pawn of Deimos, Diana has to actively put the mission above her relationship. This arc shows how each member of the Trinity leans on each other for support and strength.

I was confused though by Bruce’s anger with Travis and Jennifer. Yes, they lied and withheld information, but how often has Bruce lied to the Bat-Family (Snyder’s Death of the Family) or kept information from the Justice League? (Snyder’s Metal or Waid’s Tower of Babel)

I did have one problem with this issue: I did not like the nonlinear plot. If done correctly, nonlinear stories are very enjoyable and entertaining. (In particular, I like the “Rashomon” style of movies.) I felt that Robinson did not do a good enough job distinguishing whether certain scenes were either in the past or present. This can be accomplished by little notes somewhere on the page. Now, it is not necessarily his fault. The art team could have drawn the past and present scenes differently with a different color palette or something of the like. This is not a massive issue, but it took me a good few minutes trying to piece together the story. It is never good when you are distracted from the story by its layout.

Final Thoughts: Overall, it was a fun issue and I am excited to see what happens next. Even with a slightly confusing nonlinear plot, it is always fun seeing the Trinity fight some monsters.