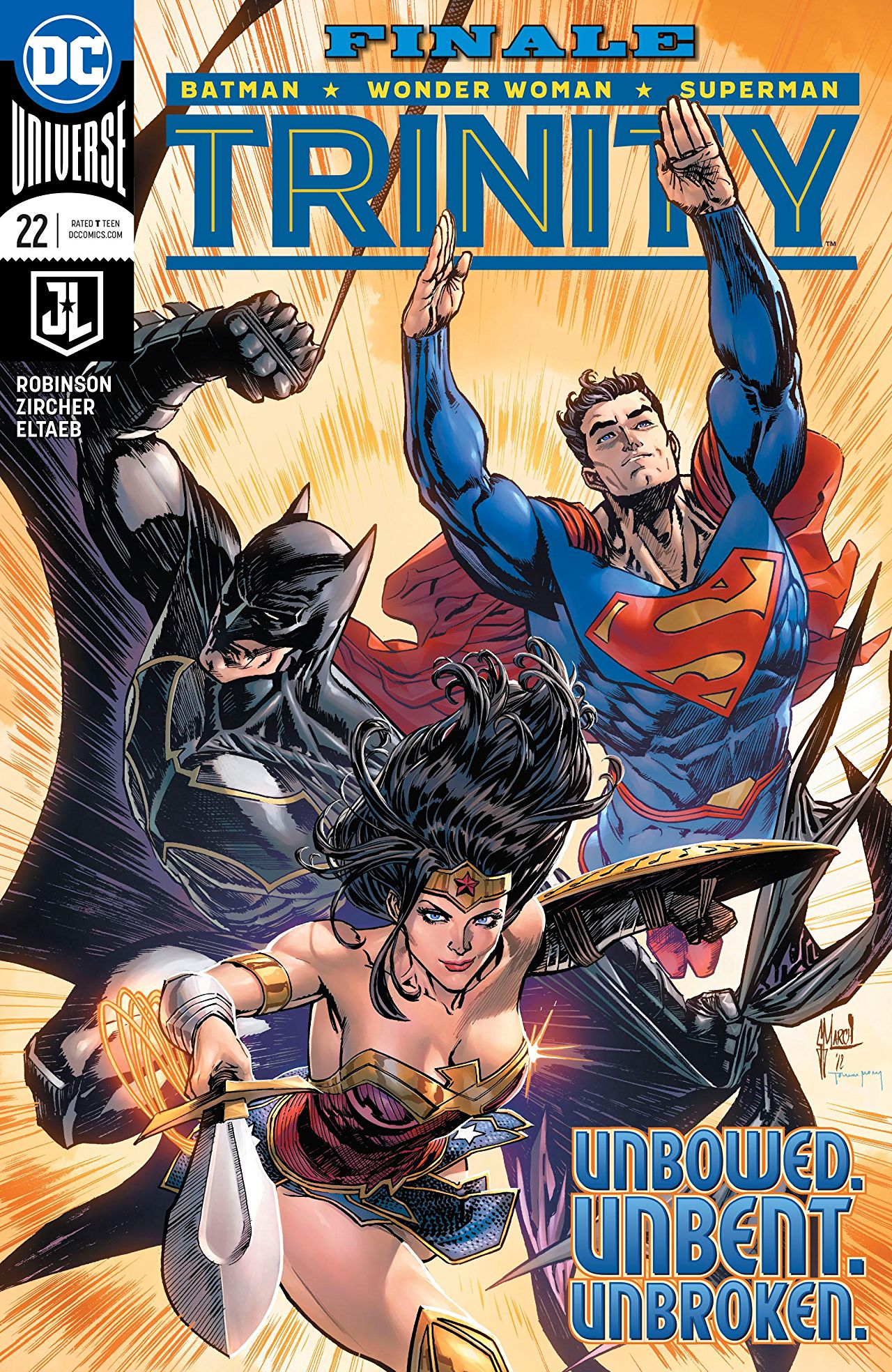 Overview: Diana, Bruce, and Clark defeat Deimos with his own magic.

Synopsis (spoilers ahead): In the past, Deimos addresses the board of Blue Strike Security and asks for a supply of earth’s weaponry. The board tells him that they have a bargain if and only if Deimos supplies them with magical artifacts from Skartaris. They also ask Deimos for two more favors: they want him to take care of Steve Trevor, and for him to allow a Blue Strike squad to check out Skartaris and see if he is worth their time.

In the present, Deimos mocks the Trinity as Diana faces off against a beastly Steve while Bruce and Clark are bound by magical chains. Deimos taunts Bruce that he should have known that coming to Blue Strike Security would be a trap. Bruce admits that that is exactly the plan: the quickest way to Deimos was falling into his trap, and where Deimos is then Steve will be there also.

Diana pleads for Steve to overcome the magic of Deimos. Deimos mocks her attempts to reason with Steve. Bruce encourages Deimos to gloat because, little does he know, in his boasting, Bruce will be able to learn Deimos’ plan. Deimos tells the Trinity that earth’s weaponry plus Deimos’ magic will yield extremely powerful weapons, weapons that will be used against Travis Morgan and his forces. Bruce asks why he does not use the aging enhancement on Shamballah, Travis’ stronghold, and take it for himself. Deimos shares that Blue Strike Security specifically wants that spell; if they obtain it, they will mess up his plans.

Deimos is dumbfounded as to how Travis’ forces are at the door to Skartaris. Bruce states that it is a magical portal, and Jennifer is a powerful mage like Deimos; it would not be so hard for her to find it. Deimos shares that it will not do them any good since the only way to close the portal is by the same magic used to create it. Bruce realizes that that is the key to stopping him, using Deimos’ magic against himself.

Deimos taunts Diana that he expected her to give up on Steve, but she states that she will never give up on him. At that moment, Steve remembers Diana and he attacks Deimos for his treachery. With Steve and Diana distracting Deimos, Clark and Bruce are released from their bonds. Bruce tells Clark to grab Steve and tells Diana that Steve is the key to unlock the portal; Steve was changed into a monster by Deimos’ magic, thus Steve is the key to allow the opening of the portal. Steve breaks through the portal, and Travis’ forces enter the battle.

As Steve breaches the portal, Deimos uses the age spell on all of Trinity and Travis’ forces; but, at the moment before he does, Diana uses her lasso on him. However, his spell affected him and him alone since his spell reverses everything (including age.) Thus, Diana’s lasso became a lasso of lies. This allows the Trinity to trick Deimos; he used the spell against himself and believes he defeated the Trinity.

Analysis: Although this is one of the weakest issues in this run in terms of its plot, I genuinely liked the arc overall. With this being the final issue of this series, I will hate not reading this title in the future.

I liked how James Robinson focused on the Trinity’s relationships with one another than their heroic escapades. In the first arc, he explored their characters baggage and how each member supported one another. And in its last arc, he explored them being a well-oiled machine. This title also allowed Diana and Bruce to become deeper friends with the pre-New 52 Clark. At first, Diana and Bruce were uneasy of this Clark because he is not the same one they knew. But in the end, they became the Trinity as we know them; the de facto elite heroes of the DC Universe.

The art has been consistently stellar. You can clearly see Patrick Zircher took his time and gave beautiful detail to each scene and character in this issue. The colors also had the same level of detail as the pencils. Great job Gabe Etlaeb!

Final Thoughts: I liked this issue and this arc overall. However, I am sad that this is the finale and that this title has come to an end.