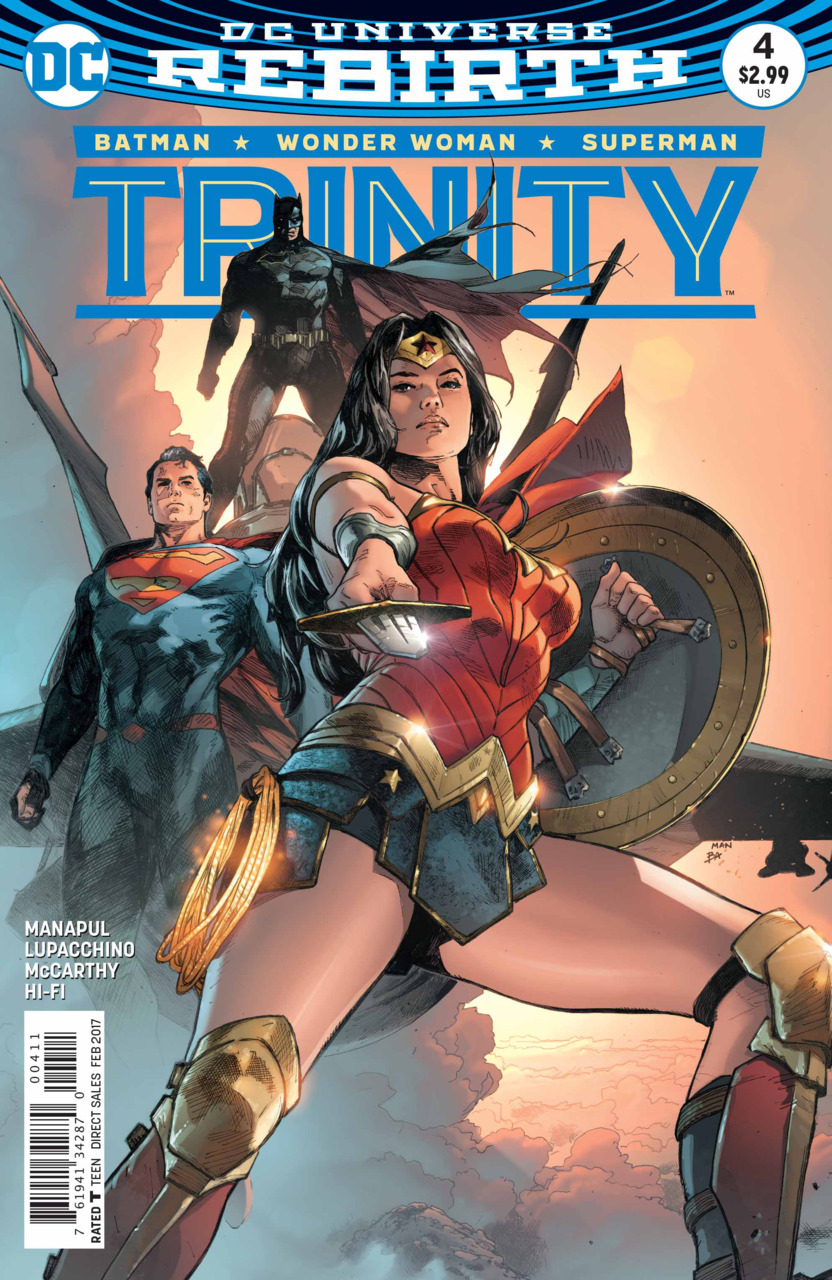 Synopsis: As their boat nears the shoreline, Wonder Woman has to continually remind herself that none of this is real. The Trinity is still trapped in this dream world and after helping Clark and Bruce come to terms with their own lives in various dream cities, it is Diana’s turn to face her past choices. Upon leaving the boat, the three are stopped by a number of Amazonian warriors who demand to know who they are and why they have come to Themyscira. Much to Wonder Woman’s surprise, a younger Diana is among the soldiers and states that they must take the new arrivals before her mother to be judged.

Meanwhile, in the real world, Lois breaks through the barn where both Jon and the Trinity are being held captive by Poison Ivy. As she tries to wake up Jon, Poison Ivy knocks her out.

The Trinity are then put through series of test during olympic style games to prove their worthiness to Queen Hippolyta and the rest of the Amazonian population. All three succeed through displays of strength and skill in the games. As a reward, Diana is welcomed to stay on the island which overwhelms her. She feels that, deep down, that is all she has ever wanted since leaving the island. However, she is surprised when her mother tells her that Batman and Superman will be banished to the Dark Quarters.

Underneath the island, Wonder Woman refuses to be separated from Batman and Superman. As they are led to the boat that will take them to the Dark Quarters, the young Diana decides to help the Trinity and leaps onto their boat against her mother’s wishes. To better understand each other, the younger Diana connects herself to Wonder Woman with the Lasso of Truth. After the connection, she reveals that this dream world is trying to understand the Trinity better by placing them at their most vulnerable moments. Just as they come to this realization, a giant sea serpent swallows them whole.

Inside the belly of the serpent, the Trinity fight as Diana tries to recover her sword. She is able to retrieve it and proceeds to open the belly of the beast so that they can escape. Just before Bruce is able to thank Diana for staying with them despite being offered a place on Paradise Island, the Trinity discovers who has been behind the plot to trap them in this dream world…Mongul.

Thoughts: Another great issue for this title and it felt really impactful as an exploration into Diana’s true feelings towards her friends. Her commitment to what is right rather than what she may wish for shows just how strong of a person she really is. You can really feel for her and how homesick she is. This issue helped prove, though, that she has found a new family in the Trinity that is worth fighting and dying for. Manapul nails it yet again here and continues to bring true character development to the Trinity as a whole through each issue’s exploration into each character.

Although Mongul’s involvement now makes this arc a reinterpretation (I do not want to say “re-hash” given how different and explorative Manapul has been here with each character) of Alan Moore’s “For the Man Who Has Everything”, I will not be complaining as this arc takes an in-depth look at the Trinity individually as well as how they are together. As this issue sums up, this arc is about exposing the vulnerabilities of each of the Trinity. This only serves to elevate them more as humans because it makes them relatable to us readers.

As this arc nears its end, I am excited to see where Manapul will take it next. Mongul’s reveal at the end means we will most likely get a pretty action-packed next issue. However, the important thing is the groundwork that Manapul has been laying down here. He has made this Trinity grow together as they explore each others’ weaknesses and insecurities. The bond that they have recreated here in this arc can only help to make for even better stories here on out.