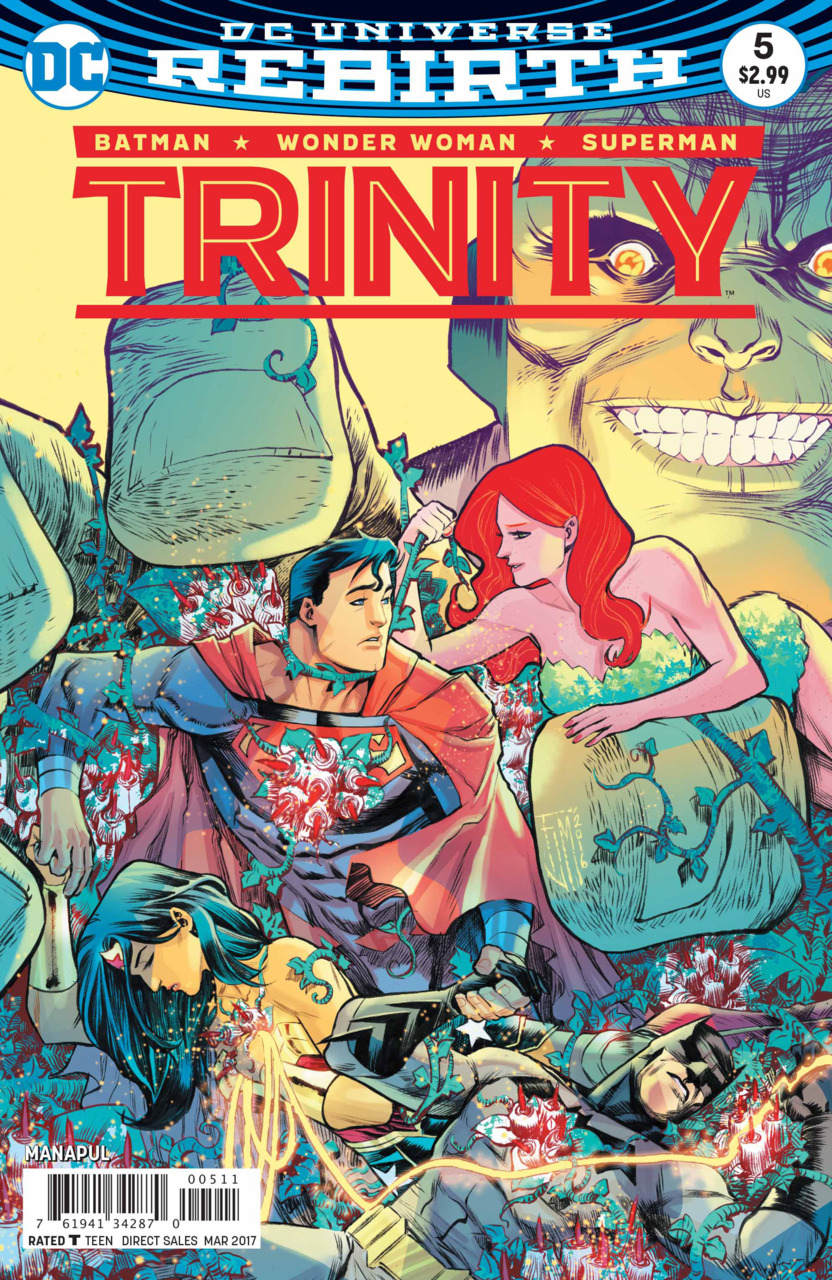 Synopsis: The issue begins with a flashback showing how Poison Ivy became connected to the dream world of the Black Mercy. Due to her connection to the elemental force known as “The Green”, she was able to tap into the Black Mercy. While there, she encountered a child like being who eventually grew close to her. Poison Ivy began to see the child as a daughter so when she was pulled from the dream world she started to try and reach out to get her “daughter” back. Returning to the present in the Kent barn, Lois calls Poison Ivy crazy and even questions how her current actions will help. Ivy explains that the farm is a source to massive solar energy which will help breach reality to the dream world.

Inside the dream world, the Trinity face off against Mongul who has been under the influence of the Black Mercy for years now. He begins to overpower them but the small child lets him know that he can’t kill them just yet. As he is distracted, the Trinity strikes back and gains the upper hand. It is short lived as they soon learn that they are in Mongul’s dream and the child is the one who rules this dream world.

Mongul re-tells his story after being under the influence of the Black Mercy. Surrounded by piles of dead Supermen, Mongul explains that the Black Mercy continued to give him what he wanted but not what he needed. It was at this moment that the child emerged from the pile of Superman corpses. This child ultimately became an heir of some kind to Mongul. This “White Mercy” as Mongul referred to the child, was taught by Mongul his hatred for Superman and his love of conquest. Eventually, Mongul’s flashbacks catch up to Poison Ivy’s when he says that her appearance in the dream world gave him the opportunity they both needed to escape and the White Mercy’s chance to conquer the real world.

The Trinity tell Mongul he will never leave this place. The child interrupts them and says within each of their dreams, she was able to invade their hearts and now has total control over them. This becomes frighteningly clear for Lois in the real world as the eyes of her husband and his friends open with the White Mercy’s orange hue and the bodies all tell Poison Ivy, “Mother I am here”.

Thoughts: Although this issue did not have really any deep character moments, this issue still was fun to learn about the backstory to the numerous villains involved in the plot to take down the Trinity. There were a few more problems in this issue than in the past few (which have been close to perfect) and mostly were due to continuity issues. For one, Poison Ivy’s backstory seemed very confusing unless you had read the Cycle of Life mini-series. Mongul was a little easier to follow given how popular the story of “For the Man who has Everything” by Alan Moore is in DC history.

As usual with this series so far, there are some great things to take away from the issue. The artwork by Manapul was a real standout in this issue more so than the writing given this was a little more action oriented. The dynamic side by side fight panels of each Trinity member fighting Mongul were great visuals that just pop off the pages. Manapul even incorporated the previous issues story themes in these fight panels with each member reminding us as the readers of what they have each overcome individually within their own dreamscapes.

Another nice touch to the issue was a further explanation of the Black Mercy and updating its features. Seeing him atop a giant pile of dead Supermen and looking bored was enough of a visual explanation of what this place/thing can do to someone. Seeing the different versions of Superman from different era’s was another cool thing to see on the page.

Overall, this issue was mostly just action directed and back-story driven. Hearing more about the Black Mercy was interesting and Manapul has certainly introduced a new element to it with Mongul’s daughter, the “White Mercy”. My hope going forward is that Manapul has found an interesting way for the Trinity to overcome the daughter’s control over their bodies.