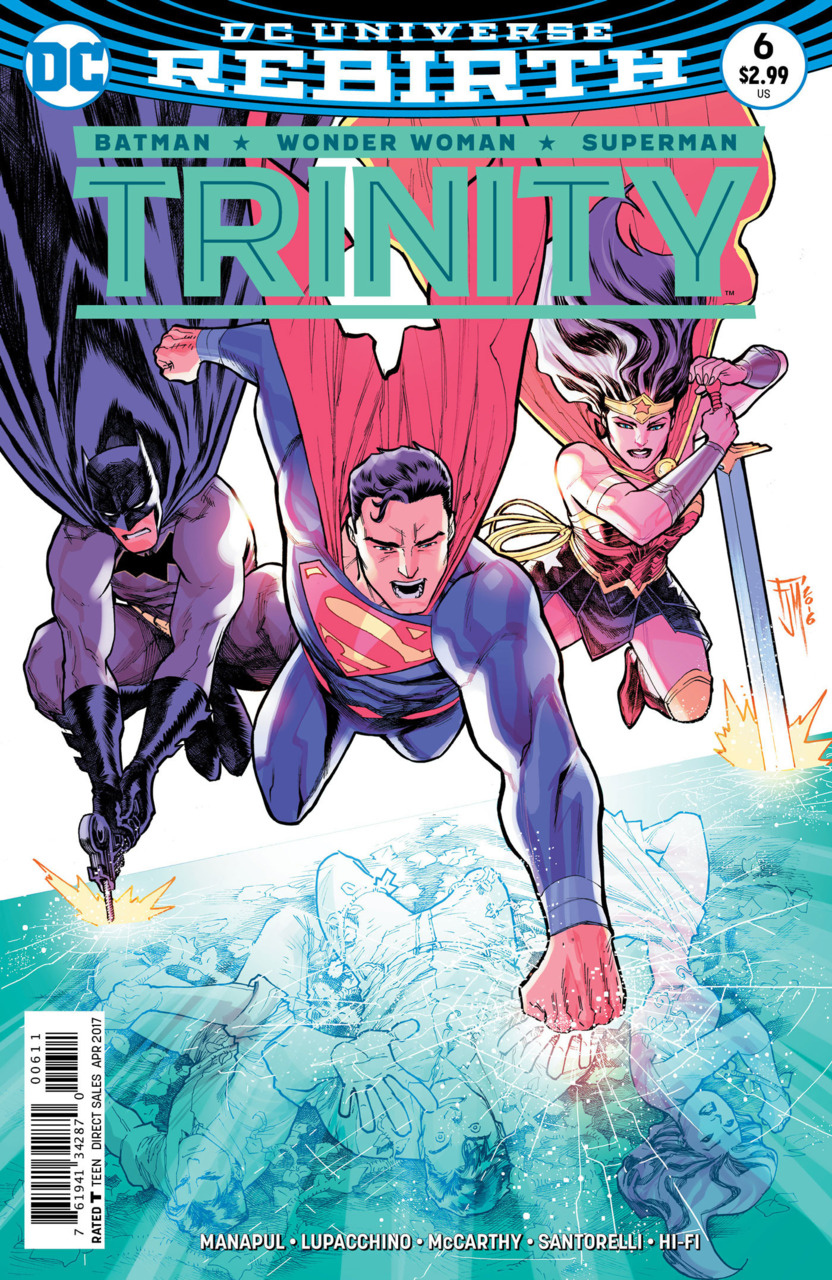 Synopsis: The White Mercy begins the issue with explaining how she learned something from taking down each of the Trinity’s emotional barriers. Through this learning experience, she allowed Mongul to defeat the Trinity and ultimately escape the Black Mercy by taking over Superman’s body. Once outside in the real world, Mongul (as Clark) begins his conquest of the home Kal-El loves. Lois, however, allows Jon to cut loose and fight Mongul.

Back in the Black Mercy, Superman collapses with the loss of his material self in the real world. Batman becomes frustrated with The White Mercy and demands that she release them from this world. As Wonder Woman tries to calm Bruce down, the White Mercy states that she will help them. She goes deeper into her opening monologue and details how she learned different emotions from each hero’s core emotion. She was able to learn joy from Clark, loyalty from Diana, and the strength that Bruce had as a result of his guilt. She wishes to help but, unlike Mongul, would rather ask for help from Wonder Woman and Batman.

Back in the real world, Jon does his best to fight off Mongul but Mongul is more powerful. Just as he is about to crush the group, Bruce leaps out and rescues them. Bruce is actually the White Mercy in control of his body. Poison Ivy is overjoyed to recognizes her “daughter”. She asks White Mercy if she is able to give super powers to Bruce’s body to which White Mercy states that she can not. However, she has learned from the world of the Black Mercy that Bruce is a very prepared man. She proves this by pulling out a Kryptonite necklace and blasting Mongul/Superman off his feet. Jon and Lois rush to pull the Black Mercy flower off of the wreaked Superman. Mongul cries out as the flower is detached and Clark regains control of his body. Poison Ivy has a tearful goodbye with White Mercy who says that she will erase her memory of this experience to ease the pain. With that, Poison Ivy removes the Black Mercy from Bruce’s body.

Back in the Black Mercy, Diana undergoes a series of trials while carrying her friends to safety. Once she realizes the truth that they are safe, she is able to find her own way out of the dream world. The Trinity is later seated at the dinner table next to a gaping hole in the Kent farm. They make a joke about it casting too much light for Bruce, but he only responds with that its actually perfect.

The issue and arc ends with Lois talking about the walls we build around ourselves over time and how they can make us miss what is going on around us. However, with a little crack and light being able to shine through, we can move on from the shadows of the past into a brighter future.

Thoughts: As a conclusion to this first arc by Manapul, I thought it did a great job of closing out this story but not teasing so much that we were left on a cliffhanger. It accomplished what it set out to do as a way of bringing the Trinity closer together after Rebirth. The artwork was not as great as Manapul’s earlier issues, but still delivered on the action and emotion.

This issue helped to develop the White Mercy but, at the same time, summarized all that we as the readers had come to understand about our various heroes’ journeys in the dream world.

Lupacchino’s art, while very good, still made me wish for Manapul to close out this first arc. That being said, I really liked how he portrayed the White Mercy as a more sympathetic version of Mongul. The physical characteristics were there but the softer line work drawing of her eyes, made White Mercy stand out and feel different.

Overall, I am really looking forward to seeing where this series goes from here. I am a little anxious that after this character building arc will result in a more action packed arc with less substance going forward. Hopefully they utilize a good villain and keep us as engaged as I was during this first arc by Manapul.