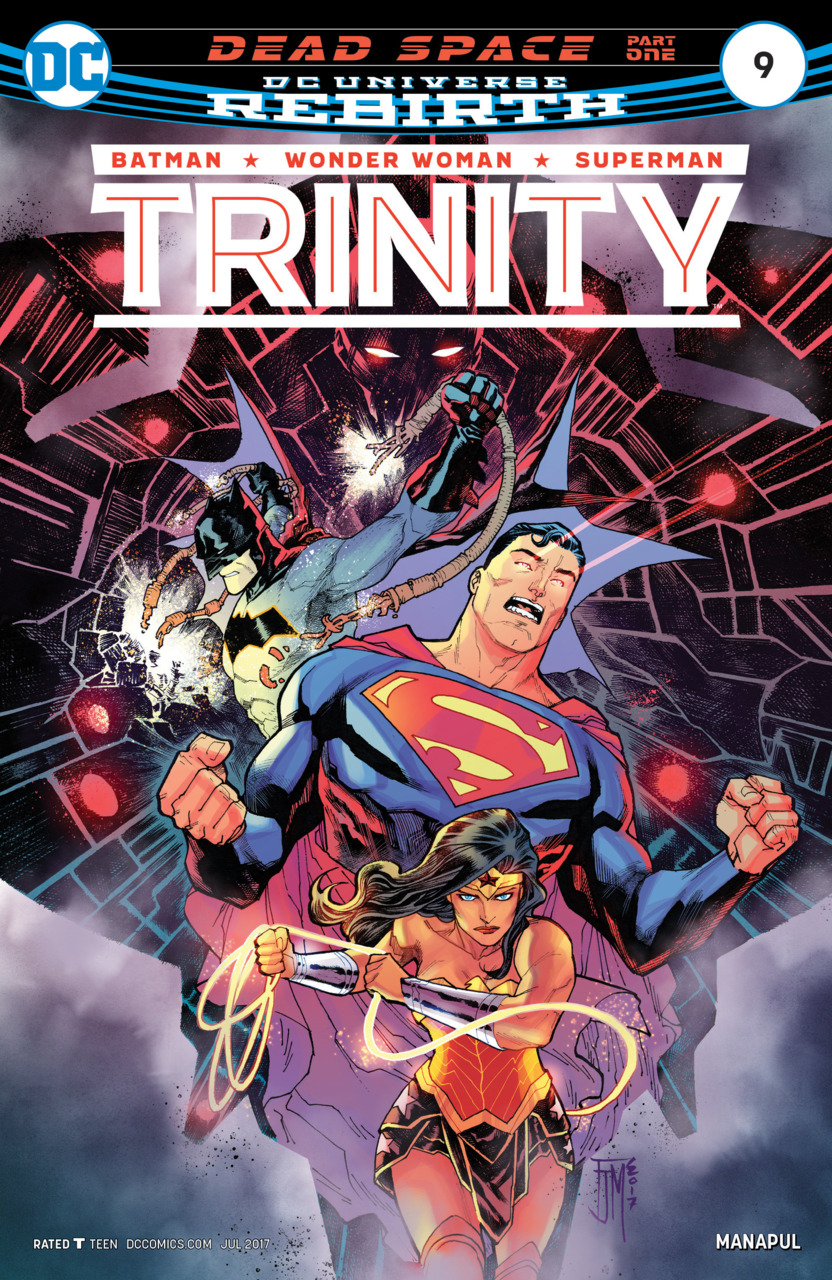 Overview: The Trinity’s mystery about the problems with their reality is interrupted with an impromptu teleport from the Watchtower. They discover their problems are just beginning as a new threat is taking over the League members.

Synopsis (spoilers ahead): Above the Earth’s atmosphere, a meteor shower begins to strike the Watchtower. As the tower is being rained down on, some unknown targeting system begins focusing on the League members above the tower.

Meanwhile on Earth, Clark takes Bruce and Diana to the cave at Devil’s Mouth Falls. He is still thinking about their time in the White Mercy and seeing each other’s childhoods. Bruce points out that it was all a lie but Clark points out drawings on the cave wall drawn by his younger self. They realize that, if these were real, the child known as the White Mercy is also real. No solution is discussed because, at that moment, the team is transported up to the Watchtower. After they leave the cave, the White Mercy appears and announces that she is, indeed, real.

The team arrives at the tower to find it under attack and in disarray. They are able to find Cyborg and decide to get him to an escape pod to try and find out what happened. He has been attacked by what appears to be Green Lantern constructs. As the Trinity makes their way to the lower levels of the tower, they are attacked by Green Lanterns Cruz and Baz who have been infected by this unknown alien enemy.

The Green Lanterns tear through the wall of the tower. As the vacuum of space sucks the Trinity out into space, the Flash appears and rescues Batman. Once they have a moment, Flash explains that the alien creatures latch on to a host and take over them. As Flash recounts how each member was taken down, Superman and Wonder Woman fly to the top of the Watchtower and encounter a tall alien who tells them that the League has been infected by a viral infection and the only solution is eradication.

Thoughts: After last month’s very in-depth and interesting issue about problems with the new reality after Rebirth, this was a small setback for in terms of emotional pull. This seems like a standard alien invasion that involves members of the League turning on each other. I do find myself curious to find out if the final alien in the panel is part of the viral symbiotic creatures or an extreme alien exterminator. Manapul’s artwork is still a big draw for me so I’m still looking forward to the next issue but the story, so far, is lacking what the past issues have given us.

I was surprised that Manapul focused part of this story on the White Mercy. It seemed like a good starting point for the Trinity to reconnect but this past issue regarding the Rebirth implications was much more appealing and engaging. Hopefully, this alien invasion arc is fun but short lived so that we can get back to the reality story started in issue eight.

As previously stated, the artwork was a big plus in this issue. Manapul’s line work and interesting panel layout made this a fun issue to read. His coloring of these panels is also something that I have missed since the first arc.

Overall, the issue was a set-up for this coming arc and the invasion of an alien virus. The Trinity is up against their own teammates now which was hinted at the previous issue. Although it is not due directly to Rebirth as previously implied, this still could be a fun arc.