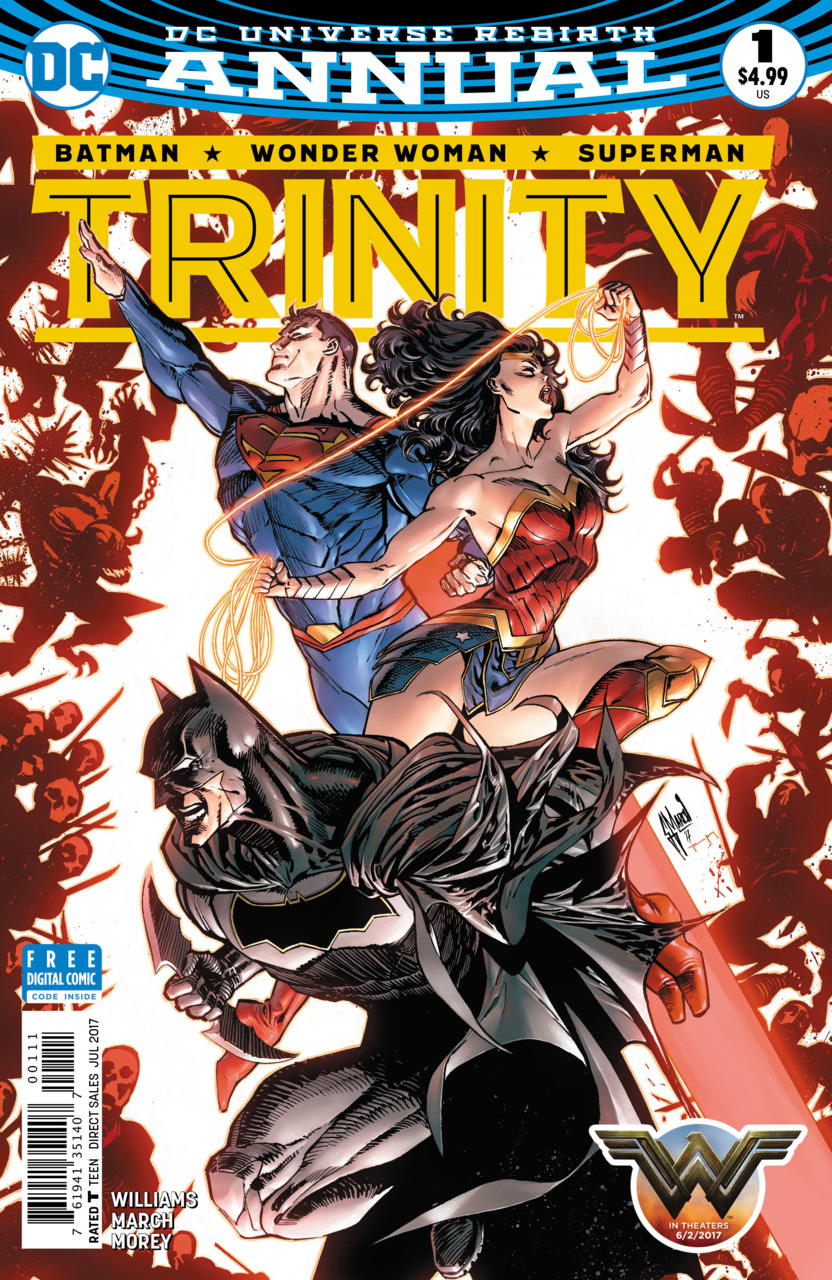 Synopsis (spoilers ahead): Taking place shortly after the meeting between Circe, Ra’s al Ghul, and Luthor, the issue begins with Circe still trying to convince Ra’s to join in an alliance with her to bring down the Trinity. The two discuss the nature of the Trinity and why they are so successful against their enemies. Ra’s is skeptical to join with Circe as Luthor has already left this would be “Unholy Trinity” to continue being the superman of Metropolis. Circe dismisses his departure and states that the Pandora Pits will draw him back as they had the first time.

At a restaurant atop a giant skyscraper in Gotham, Bruce is addressing Clark and Diana at their table. After their adventures, Bruce hoped they could come together out of costume and have that “human connection” as Clark points out. The moment does not last long as a Justice League distress call signals their attention.

Near the island where the Pandora Pits are, a hooded figure remarks how there must be something truly horrifying to call to him and draw him towards it. The figure sees an ancient painting of the Trinity being dissected.by demons. The man takes a magical photograph and sends it to Batman. As Ra’s men come out of the shadows to kill the figure, he is revealed to be Jason Blood, more commonly known as the rhyming demon Etrigan.

Even after killing Ra’s men, Ra’s and Circe offer the monster Luthor’s place. Etrigan refuses and attacks. In the fight with Ra’s, his blood is spilled into the Pandora Pits. The pools immediately pull a horrified Etrigan into their depths. The brief silence is broken by a thunderous roar as a gigantic Etrigan emerges, now freed from the controlling soul of Jason Blood, and vows to feast on the mortals of Earth along with his demon horde.Jason Blood crawls along the cavern floor and is already aging without the magical connection to the immortal demon. Although he is dying rapidly, his freedom from the monster brings him great joy.

Just as Etrigan and his demon army attacks a Greek coastal city, the Trinity arrives to stop him. Quickly overrun, Superman tells Batman to find the place where Jason Blood found the Pandora Pits and ancient paintings. Batman narrowly escapes from a group of demons and finds an elderly Jason Blood. Batman tells Jason he has to bond again with Etrigan but Jason explains that the magic would require a substantial life force sacrifice. The entire Trinity agrees to sacrifice themselves to save the world. Batman encourages Jason to accept his demons, figuratively and literally, as they all do and use it to do what’s right.

Jason begins the spell and uses the Trinity’s life force to bring the demon back into check. The Trinity is connected and can feel their life force draining. Suddenly, Circe intervenes and provides the necessary power to finish the spell because she wants to be the one to kill Diana.

Soon after Circe and Ra’s leave, the Trinity find that the Pandora Pits also have disappeared along with the mysterious and haunting cave paintings. Diana states that there is powerful dark magic at work. The issue ends weeks later with Circe and Ra’s remarking how impressive the Pits are proving. Circe reveals another part of her plan to use the Dark Trinity of Artemis, Bizarro, and Red Hood against the Trinity.

Thoughts: Even though this Unholy Trinity felt oddly placed a few issues back, it seems we are getting somewhat of a continuation in this annual. I will say that there were a few nice character moments but overall this was more of another action packed issue. The introduction of Etrigan was a nice touch and nice to see him make his debut in Rebirth. His role in the issue helped to explain just how evil and powerful these Pandora Pits are, which is important to set the stakes going forward with this Unholy Trinity.

The artwork in this annual was good but Guillem March’s line work was much better suited for the villains rather than the heroes. The deep set eyes and scowls of both Circe and Ra’s, and even Luthor in one panel, helped to draw attention to their scheming and evil ways much more vividly. March also delivered some dynamic action scenes with Wonder Woman cutting down demons left and right while Superman took on a massive Etrigan. These were really fun panels to look at.

Overall, this was a good annual and helped to continue the coming battle between the new trinities in Rebirth against Batman, Superman, and Wonder Woman. It was a nice moment with Bruce trying to connected with his fellow teammates and struggling to form the words and needing a little help from Clark.