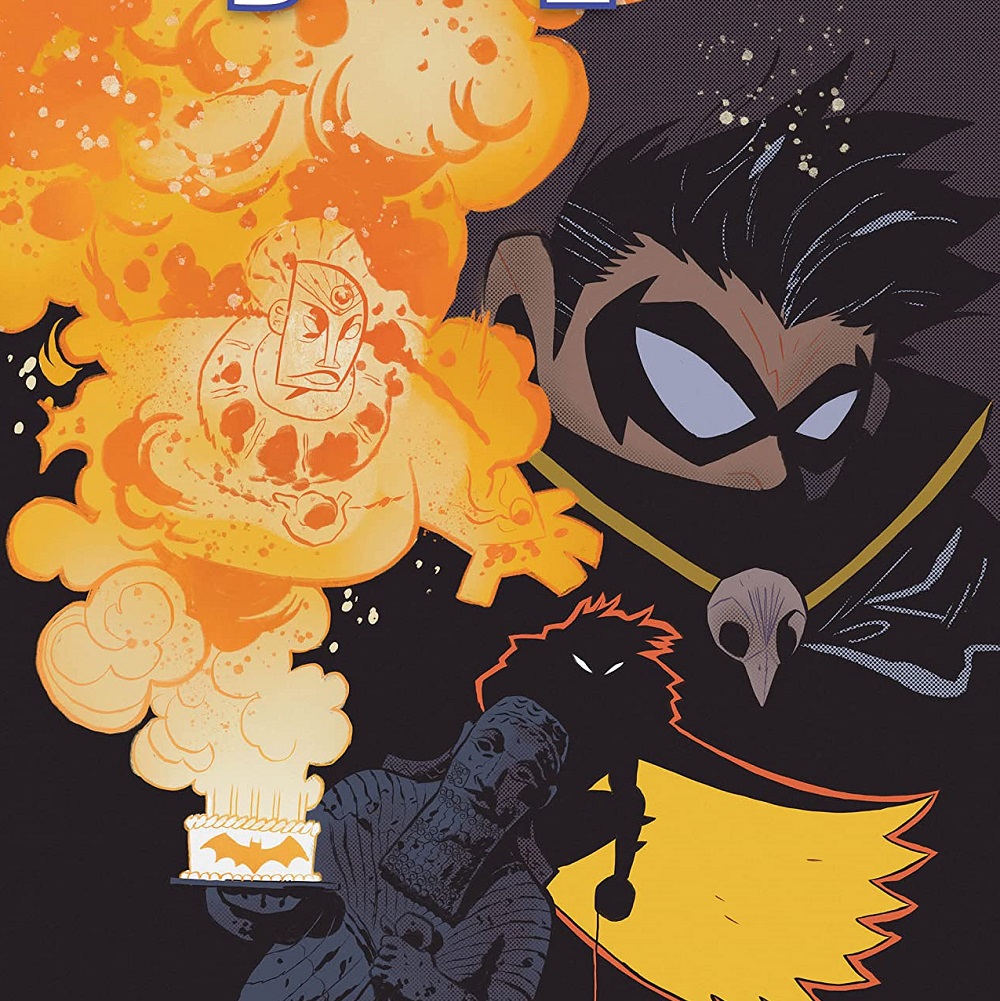 Overview: In Truth and Justice #6, it’s Damian Wayne’s thirteenth birthday, and he faces a crisis of family – more than one of them, in fact!

Synopsis (spoilers ahead): Truth and Justice #6 begins as Damian Wayne, Robin, hangs over a Lazarus Pit in an ancient temple, thinking about how he got there. Ra’s al Ghul appears, offering him immortality, and we flashback six hours, to the Bat-Family (Babs, Tim, Jason, Dick, Steph, and Cass) as they wait to surprise Damian in the Batcave with a cake for his birthday. Alfred trips their surprise early to prevent Damian from reflexively hurting anyone. Babs lights his candles, Damian extinguishes them with a shuriken (earning a fist-bump from Cass), but as Babs insists he blow them out for real, a huge explosion hits the cave.

Two godlike beings appear, searching for “the Anatolian Boy,” Damian himself. The Bat-Family fights furiously to protect Damian, but the beings teleport him away easily. Mid-transportation, Damian uses his father’s tools in his utility belt to parachute away from the beings, finding himself in Istanbul. Damian fights the beings furiously, but they recapture him, revealing their identities as Tarhun, god of land and sky, and Arinitti, goddess of the sun, from the ancient Hittite people. Ra’s al Ghul stole Tarhun’s trident, forcing them to kidnap Damian.

Arriving above the Lazarus Pit of the opening scene, Ra’s offers Damian immortality on midnight of his thirteenth birthday, but the Bat-Family arrives to save him, this time with Batman. They fight the god and goddess, but Damian yells for everyone to stop fighting for him, explaining he feels homeless – unable to satisfy both sides of his heritage, and wanting to live up to his family. Batman explains that Damian is his blood, but the Bat-Family is just as valued by him, and offers Damian the choice freely. Robin gives the supernatural beings Tarhun’s trident back, transforming them from stone to flesh, and they leave with Ra’s, free from his tyranny, to teach the ancient Demon’s Head a lesson. Batman gives Damian a pocket knife for a present, and Damian hugs his dad, overwhelmed with happiness.

Analysis: Truth and Justice has been an extremely uneven series – both thematically and in quality. The last issue, starring Batwoman, was almost unbearably badly written and featured art of medium polish at best, so my expectations going into Truth and Justice #6 were not high. However, writer Andrew Aydin and artist Juni Ba (ably assisted by master colorist Nick Filardi) rose to the occasion. Though the middle segment of this comic (which was originally released in three digital chapters before this hard copy issue) does drag a bit, being just Damian pulling implausible (if funny) gags against the supernatural beings in Turkey, the meat of the story – the Bat-Family trying to surprise Damian, and Batman’s speech in the final chapter – more than make up for it, as does the incredibly energetic artwork by Ba and Filardi.

Damian’s stories have tended to revolve around his heritage, so it’s no surprise that this story draws from that well (or Lazarus Pit, shall we say) again, but in a way that’s rarely been seen before. Most of the previous stories, particularly those penned by Peter Tomasi in Batman and Robin or Super Sons, have tended to emphasize the importance of blood, the rights conferred by biological relations. This issue does not dismiss those rights and responsibilities, but also affirms the importance of adoption and the chosen affiliation that binds the Bat-Family together. Hearing Bruce tell his son that “You are my son. My blood. My heir. But Barbara is my family just as you are. So are Dick and Jason, Cassandra and Stephanie, even Tim” is something Damian has needed to hear explicitly for close to a decade. Thanks to the development that many writers and artists have poured into him, he might be in a position to listen.

The question of whether this comic is actually canon or not remains open. Ra’s explicitly highlights that this is Damian’s thirteenth birthday, which we already saw in DC Universe: Rebirth by Geoff Johns and then returned to in Teen Titans by Ben Percy. That story could possibly mesh with this one, but it seems unlikely, though Alfred’s appearance does lend some weight to the idea that this is a flashback story. Time will tell if this story becomes a classic, referenced, and beloved like Oracle: Year One or The Man Who Falls, or forgotten (or we wish it were forgotten) like Nightwing Annual #2.

Issue artist Juni Ba provides the main cover, giving a solid glimpse of the main thematic elements of the story – the mystical elements, the birthday party, and of course Damian and the skull representing the way death stalks his life. Damion Scott, perhaps best known in DC circles as the artist for many issues of Tim Drake’s Robin series, Cassandra Cain’s Batgirl series, and of course, designer and artist for most of Stephanie Brown’s appearances as Robin, gives us one of his first images of Damian as Robin, and loads the variant cover with symbolism – from Damian crouching on a scale held by the statue of Justice, to the scary-looking Robin perched in front of him.

Editor’s Note: This issue collects three digital-first chapters of the series. You can find the chapters of the comic digitally and help support TBU in the process by purchasing this issue either through Comixology or Amazon.

This light-hearted but strongly thematic story gives Damian a fun adventure, connection to his multiple families, and wonderful artwork.