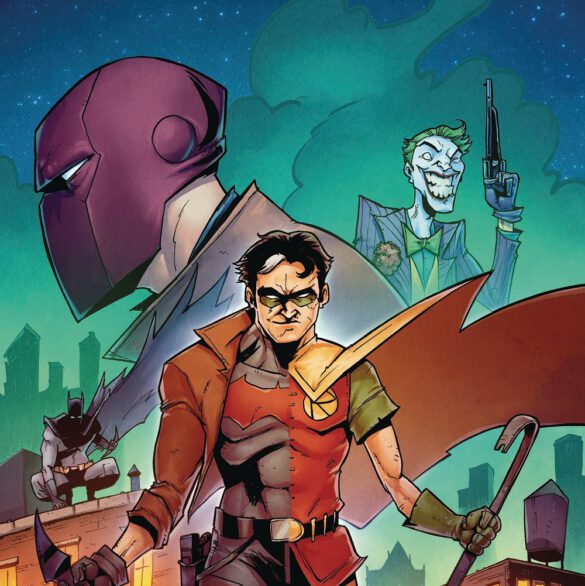 Overview: In Truth and Justice #4, Jason Todd is forced to deal with his fear and examine versions of himself thanks to the Scarecrow.

Synopsis (spoilers ahead): Jason opens the story found in Truth and Justice #4 by giving the reader his back story from his first meeting with Batman to his death at the hands of the Joker.  Jason’s story does not end there, Talia al Ghul used the Lazarus Pit to resurrect him and he eventually took on the mantle of the Red Hood, a vigilante willing to kill.  Jason does go one step further and we meet his best friend when he was a homeless kid,  he was befriended by Max Dawkins.  Max became Jason’s best friend and brother.  After Bruce took him in, Jason made sure that Max was taken care of.  Eventually Max pulled himself up from the streets.  He wanted to solve the homeless problem.  Unfortunately he never got that chance, as tonight he was killed.

The police thinks it is a heroin overdose but Jason does not think so.  He knows that Max never touched drugs.  Jason decides to investigate this on his own.  Using his helmet, Jason finds scrapings in the concrete forming a trail.  Jason follows this trail.  He runs into tire tracks .  Through the investigation, he finds the car and makes his move.  Jason takes on the thugs who try to shoot him.  He takes out two and finds the third running into a nearby building.  Jason fires and hits the guys ankle.  He goes down.  Now he is standing over the guy asking him questions.  The thug answers that the doctor made him do it.  Jason asks which doctor but soon discovers that the doctor is Jonathan Crane, the Scarecrow and now he is right behind the Red Hood.  Hood retaliates and the two fight with Jason grabbing Crane’s collar but Crane is holding a syringe in his hand and stabs Jason in it in the arm.  Jason thinks that the serum is not kicking in and draws on Crane.  A batarang flies through the air knocking the gun from jason’s hand, Batman has arrived.  Batman starts on Jason saying that he made a mistake that he could be a hero.  Jason realizes something is wrong.  Batman is unmasked and a giant bat is behind him.  Bruce hits him with a crowbar and Jason wakes up without his helmet in the grave of Jason Todd.

Jason struggles to dig himself out of the grave actually becoming the kid he was when he first died, dressed in a suit and domino mask.  He is able to dig himself out but is met by Dick Grayson, Nightwing.  Nightwing says that Jason is on Batman’s bad side again.  Jason realizes that he was infected with the fear toxin.  The two are interrupted by the unmasked Batman and his giant bat.  Nightwing and Jason start fighting but realizes that he has some control of this dream he is trapped in.  He imagines Dick out of costume and he returns to his current age and clocks Dick in the jaw.

Bruce continues to berate Jason saying that he was always his greatest disapointment.  Bruce tells Jason that he does not know a thing about who he really is and is soon confronted with himself in the forms of Robin, Red Robin, Batman, and Red Hood.  Jason starts to fight himself and takes out each version of himself leaving only him and Bruce.  Bruce tells Jason that he always know what he would become and Jason is soon faced with himself as the Joker.  Both he and the Joker are holding crowbars and Robin is dead.

Jason declares that he did not kill Robin, he is not the Joker.  He could never become the monster.  The Jason version of Joker however says that Jason was always on the road to become him.  Jason draws on the Joker and discovers that his gun is a joke gun, however the Joker is holding a real gun and shoots him in the chest.  Bruce tells the fallen Jason that he is sure that he tried his best but he was always a lost cause.  This motivates Jason to rise.  He tells them about Max, that he was better than all of them.  Jason shouts that he is going to kill his fears and then he is next.  Jason soon attacks the Joker and turns on Bruce who now has a change of heart.  He admits that he might have been wrong and that Jason could be saved after all.  Jason tells Bruce that he saves himself now and charges.  He goes right through Bruce and tackles the Scarecrow.  Jason is back in his helmet and is the Red Hood.  He points his gun at the downed Scarecrow.

The next scene shows Jason on the roof being approached by Batman.  Jason admits that he used a rubber bullet to shoot Crane but he did not kill him.  Jason accuses Batman saying that he must have been always there ready to stop Jason if he should go too far.  Batman tells Jason that he arrived just as Jason broke free of the toxin and he know that he did not have to stop Jason.  Batman says that he trusts him.  Both leave.

We run into the cops from the beginning of the story.  The woman steps away, she has to make a quick call.  She reports that Red Hood fought the toxin but he left Crane alive.  It is revealed that the woman is talking with Talia. Talia says that Jason must be fearless if he is to become the next Ra’s al Ghul.

Analysis: This story in Truth and Justice #4 was fantastic.  It truly is a story that explores the character of Jason Todd.  We see Jason deal with the different aspects of himself, even the proposed end of him becoming the thing he hates the most, the Joker.

The characterization of Jason is spot on to how I see him.  He is rash and is always butting heads with Batman as the two have different visions of the mission because of Jason’s past.  The difference here is that the fear toxin Batman is very condescending on Jason, constantly telling him that he is a failure where the real Batman tells Jason that he may be tough on him but he still believes in him.  This gives Jason a moment of pause.

Despite the story, I am not a fan of the art found in Truth and Justice #4.  It is extremely cartoony and I really do not see this style as fitting with the story that is being told.  Major characters appear out of model especially Nightwing.  He looks nothing like Dick Grayson does in other titles and projects.  Talia in the last panel looks very off to me because of her facial features.

Editor’s Note: This issue collects three digital-first chapters of the series. You can find the chapters of the comic digitally and help support TBU in the process by purchasing this issue either through Comixology or Amazon.

Despite a really fantastic story, the art style for the issue drags the rating down. Better art for the story would have made this one of my favorite releases this month.