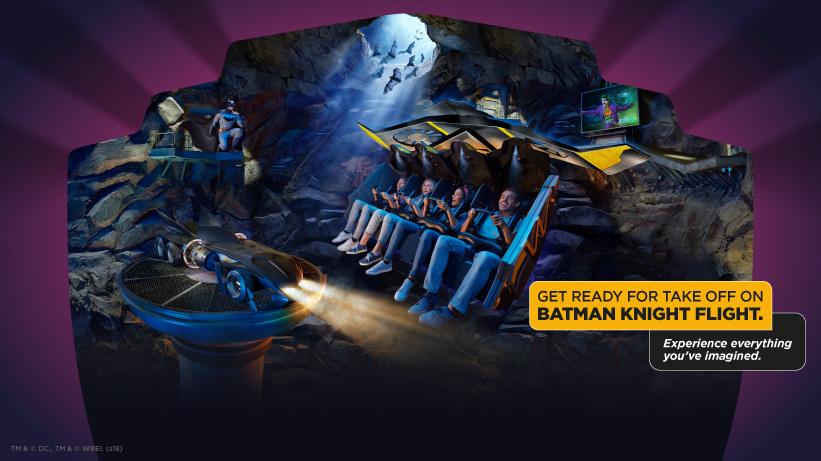 The Warner Bros. World theme park in Abu Dhabi premiered one of its most anticipated rides this week as Batman: Knight Flight opens to the public. The theme park opened in July and is still opening rides to the public, the most recent of which is a Batman-themed thrill ride.

The ride uses similar technology to that of Universal’s Harry Potter and the Forbidden Journey. This includes special effects to give the rider the sensation of soaring over Gotham City. The park’s creative designer Dave Cobb is excited to introduce the new attraction.

“Batman: Knight Flight is a cutting-edge experience where guests visit the offices of Wayne Tech as unassuming job fair candidates, only to be identified and recruited by Batman himself to help solve a mystery unfolding on the streets and in the skies above Gotham City. Remotely tethered to the Batmobile, guests take an airborne journey in a high-tech drone wing and find themselves caught in a heroic and thrilling sky-high battle between the Dark Knight, The Joker and his Rogues’ Gallery of cohorts like Harley Quinn, Poison Ivy and Mr. Freeze.”

The ride promises riders an experience that is both thrilling and cinematic with appearances from some of Batman’s most beloved characters.

“Combining massive immersive sets, cinematic media and live special effects, this world-class attraction is unlike anything else in the region, and the entire Thinkwell team is immensely proud and excited for our partners at Miral, Farah Leisure and Warner Bros. to finally share it with park guests.”

The park also released a brief video showcasing some of the queue for the ride and the ride itself on Facebook.