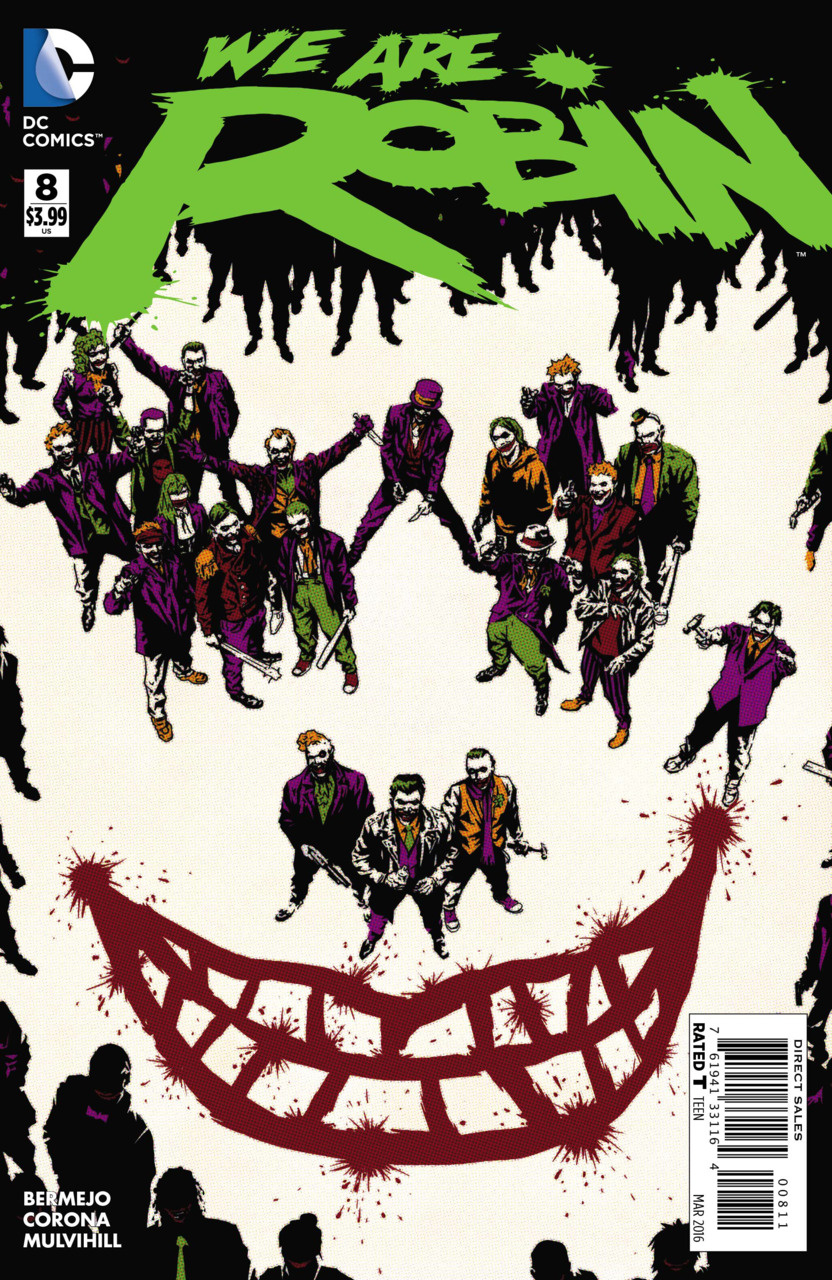 Synopsis: Part one of the next storyline in the We Are Robin series, “Jokers”, begins with the story of a juvenile delinquent named Johnny Bender or “Smiley” because of his permanent grin. He explains this was due to the combination of a muscular disease and botched plastic surgery forced upon him by his parents. It is revealed that he admires and even worships the Joker. His cell wall is covered with photos of the Joker and he tells his cell mate before being released from prison that the Joker is the only person who understands the world.

Over at a hospital in Gotham, Duke Thomas is waiting to hear any news regarding his missing parents. His monologue details his extensive search of hospitals in Gotham as well as neighboring cities. A nurse informs Duke that no one fitting his parents’ descriptions had been admitted to the hospital. As Duke is leaving, he gets involved in a takedown of a patient who is acting erratically. The hospital nurse explains that the patient was involved in the Joker attacks and is still recovering. He mentions psychiatric hospitals and Duke becomes elated as he has not explored the possibility that his parents may have been admitted to a mental health facility. As he leaves the hospital, he reminds himself to reach out to Riko when he gets a chance.

Taking us to the previous day outside the Bank of Gotham, Riko is debating what kind of text to send Duke when an officer tells her to empty the contents of her backpack because she is wearing Robin colors. The officer’s partner tells him to forget about it because those laws are not being enforced anymore. An old man interrupts to inform the police that someone may have robbed a convenience store nearby.

Over the next few pages we see where some of the major members of the We Are Robin movement are at with their lives. Some are still clearly very much involved in the vigilante movement. Dre is violently beating up criminals in the park while Dax is attempting to build his own grappling gun. Izzy is trying to get her life in order while her mother grieves for her gangster son who tried to kill Izzy before Robin War.

Returning to Bender’s story, his father takes him home and it becomes very clear that his parents are more concerned with their work and phones than with him. He proceeds to go up to his room and begin putting on makeup and retrieving a hidden gun in his air vent.

During the final pages of the issue, Duke finds his parents in a mental institution where they have been for a few weeks according to the doctor. They still are very much affected by the Joker toxin and are unable to recognize their son kneeling by their bedside. The issue ends with Johnny smiling and telling a joke while standing over the murdered corpses of his parents.

Thoughts: Even though Robin War was a bit of a letdown at its conclusion, I am really happy with how Bermejo started off his next storyline for the series. He gave us a very creepy individual that will certainly be one of the main “villains” of the upcoming storyline. Between his clear mental problems and how his parents have treated him all his life, it is not too surprising how this young man could turn into a psychotic murderer, especially in a city like Gotham. Between him and the inclusion of the mentally ill throughout Gotham, Bermejo is actually bringing something into his writing relevant in today’s world regarding the violent crimes committed by people who were later found to have mental issues. The debate of where to place blame following those horrible events is a very charged one in society. It is an issue I hope that gets played out in future issues of the “Jokers” storyline. Bermejo has been trying to make this series feel more real and I think this issue #8 helped to make that more the case now.

Along with solid writing and story set up from Bermejo, Corona delivers great artwork makes this issue have that same gritty feel that lends itself to a story of teenage vigilantes. I feel like Corona’s style is very similar to Eduardo Risso in that we get very gritty scenes with a great use of shadows and light.

Overall, I would say this was a great first issue and, so far, a good recovery after Robin War’s lackluster performance. If anyone has not been following the series up until now, this feels like a good first issue to start with now.