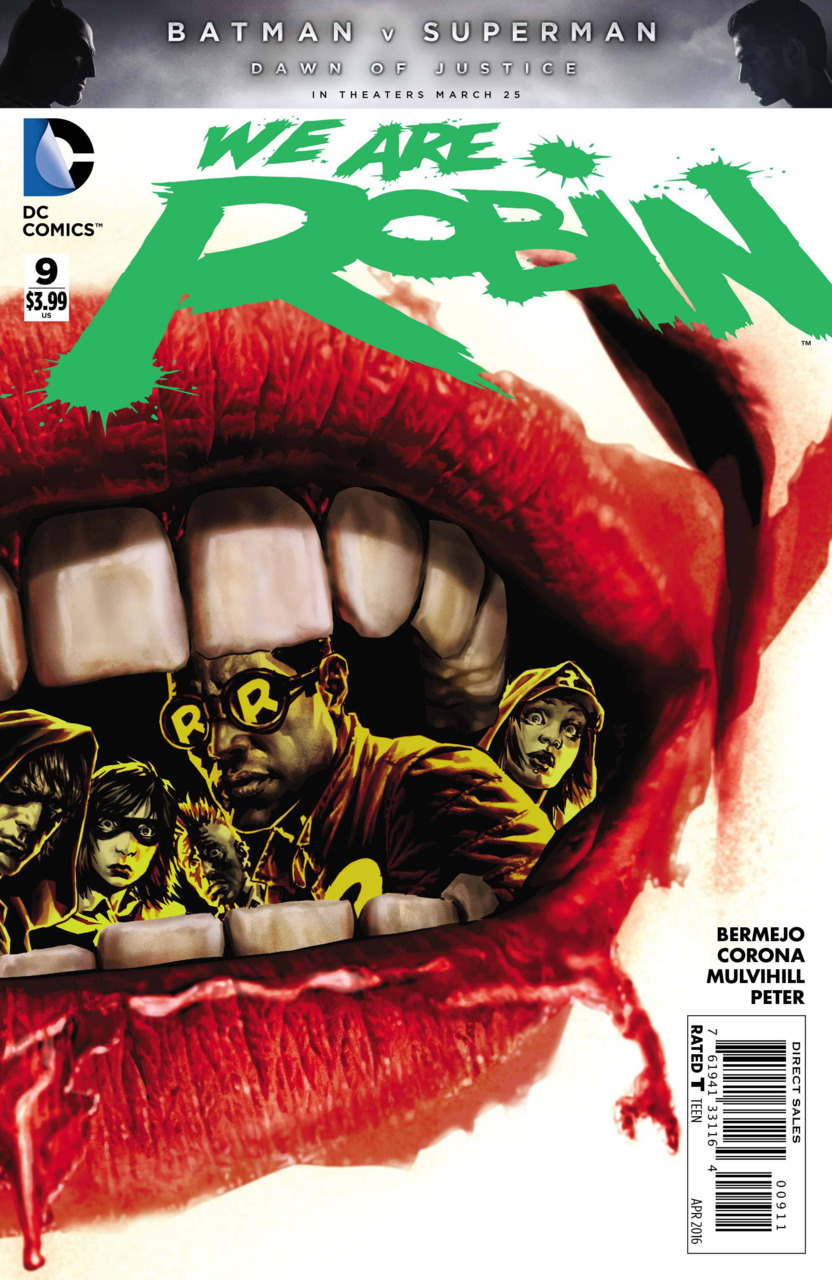 Synopsis: The issue opens inside an abandoned Wayne Corp reconstruction home where a few thugs come upon Smiley hiding out from the authorities. It has been a few days since he murdered his parents but the news has traveled fast. The thugs quickly realize how dangerous Smiley is as he pulls a gun on them and proceeds to pummel the largest member of the group. He says that he is a big fan of the Joker and wants to cause the same kind of mayhem in Gotham. He ends his speech about causing senseless pain by offering the group a chance to join him in some “fun”.

Two days later, a disinterested Izzy is with a school counselor who wants her to figure out what she wants to be someday. He tells her that, even with her family troubles, she needs to increase her school attendance or she will fail and never reach her full potential.

Outside the school, Duke waits for Izzy and they begin to catch up on what has been going on in their lives since Robin War. The two even seem to share a moment just when Riko sees them. She is shocked when she sees them together and is very disappointed given her feelings for Duke. She hides in a convenience store to get away from them and ends up beating up a racist customer. Even the owner who was being ridiculed tells her to calm down.

Meanwhile, Dax and Dre are embracing their vigilante lives. Dax is running along rooftops and testing out his new grappling gun. Dre, on the other hand, is out on the streets and eventually intervenes between a family and Smiley’s Jokers. After trading words and justifications for what they are doing, Dre fights the gang only to have Smiley put a gun to his head. Before he can pull the trigger, the boy of the family Dre just saved bites Smiley’s leg and allows Dre to disarm him.

As all the characters continue down their respective paths, the issue ends with Duke’s running monologue stating that Gotham is a city of possibilities where “every day, some things end…and others begin” as an ominous panel shows the Joker gang growing.

Thoughts: With such a strong start to this new arc, I have to admit I was disappointed with this issue. I was interested to see Bermejo give us a grittier version of what the “insane” of Gotham were capable of. Now I may be jumping the gun here with my conclusions but, unfortunately, the events in this issue have made me much more skeptical of this arc. The biggest negative for me was the fact that Smiley is an actual mentally disturbed character and it seemed like “the crazies” of Gotham would gravitate towards him in the absence of the Joker. Instead there is a brief exchange between Smiley and some thugs and the Joker gang is born. The thugs were purely motivated by protection of territory and money then some makeup makes them completely crazy like Smiley.

Another point that frustrated me was another absence of Alfred. I mean I get that he probably would not want to endanger children and that his inclusion in the story may have been a mistake. However, that being said, he is in the story now and has popped up once in a while but continually saying he will be more involved…not really getting that feeling. Maybe now that Bruce is back as Batman, Alfred does not feel like there is a real need for these vigilantes anymore?

Corona’s artwork was solid here and no big change from previous issue. With many close ups on characters’ faces, we got to see him take relatively stale scenes and elevate them to something more impactful.

Although let down after reading this issue, I still am hopeful for Bermejo to come back next month with a stronger showing and move this story along at a faster pace.