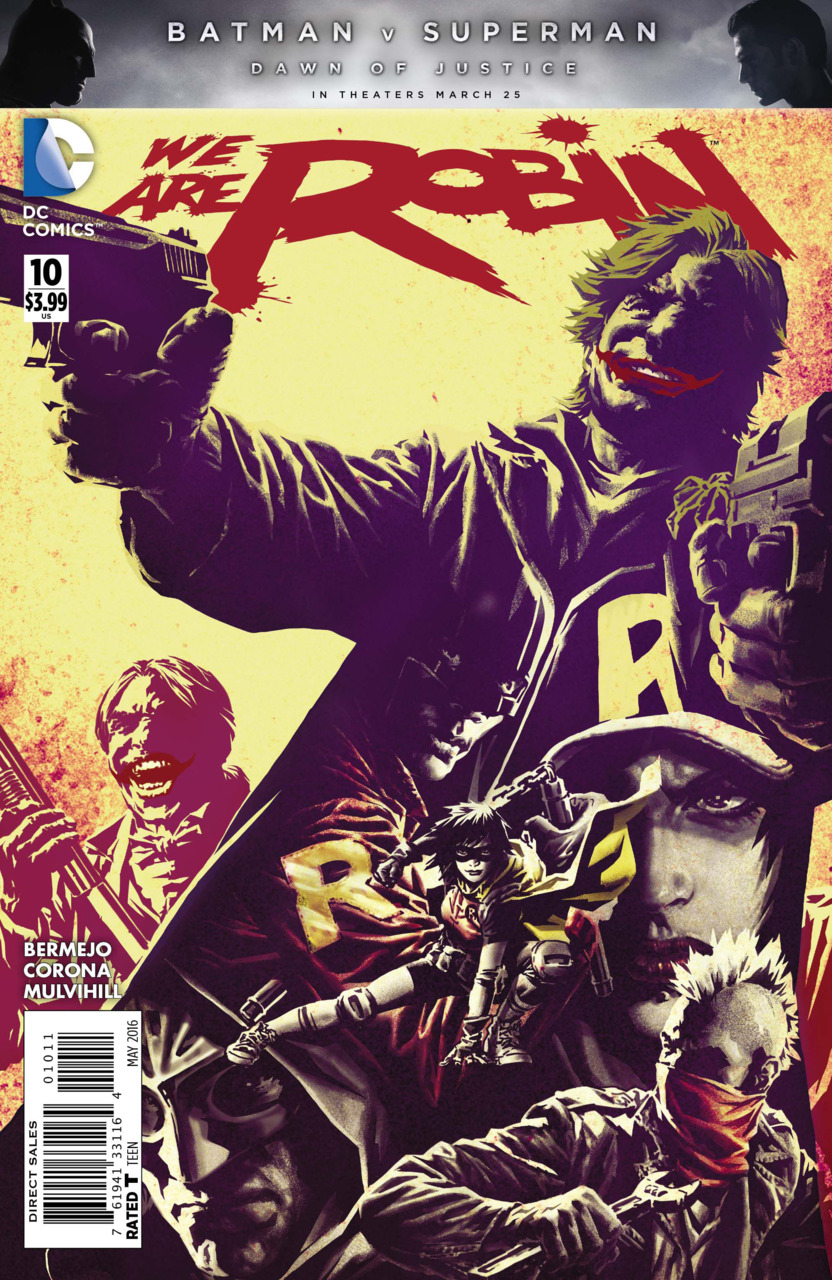 Synopsis: The issue opens in a nightclub in Gotham where Smiley is “entertaining” a crowd during open mic night. He explains to the crowd about how his buddy coached him for an open mic night and that you have to not let hecklers get to you. His friend related it to a gun fight and being the first to draw. To make the story more relatable, Smiley actually pulls a gun and begins to fire into the crowd. The entire scene is being recorded on a cell phone by an apparent member of the Jokerz.

Returning to a character we had not seen in awhile, Shug-R is messaging with fellow Robin members and discussing the recent chaos that Smiley and his Jokerz have caused. After watching the most recent attack on the internet, Shug-R messages to other Robins that it might be time to get all the Robins together again. It is clear that many of these Robins have been off the streets since the Robin War storyline and the laws outlawing their movements were in effect.

At the Miller Psychiatric Hospital, Duke is caring for his parents and trying to get through to them. Since their Joker poisoning, they still are not showing any signs of improvement. Duke runs out, when he sees a news report of Smiley’s recent activities.

Meanwhile, Riko is in some martial arts class where she ends up beating up a sparring partner. Her teacher asks her what is wrong when she begins to cry and says that she is in control. She is unable to finish her sentence and runs out of the dojo.

At a local diner, Izzy is still having trouble balancing school and work with her mother.

At Dre’s apartment, Dax visits and wants to discuss his latest inventions and Dre takes the opportunity to show him what he has been up to at night. Dax tells Dre that he can’t do this vigilante thing alone but Dre is done with the Robin movement. They get interrupted by Shug-R messaging them all to see if the Robins want to help track down Smiley. Without responding, Dre suits up and jumps out his window with Dax right behind him.

On a street corner, Duke confronts a friend of Smiley’s sister, Tiffany, and asks to see her. The friend, Angela, accuses of Duke not being concerned enough before the murder. Angela walks away when Duke asks her if she knows where Smiley is and says that everyone has problems with Smiley.

Surrounded by a group of Jokerz, Smiley is addressing them and telling them that they are re-educating the people of Gotham. He tells them that it is up to them to teach the youth of Gotham how to fight against the insanity of the system that they are surrounded by consisting of a robotic batman and nerdy Robins. He reveals to the group the instruments for their education, an array of assault weapons, and tells them no books required. Dre is hidden among the crowd and intends to infiltrate the group to stop them.

Dax messages the Robins and asks for their help to assist Dre and stop Smiley. At school, Duke asks Riko if she had read the messages and that maybe they all ought to get together and talk. She turns on him and says that he was the one that said they were not Robins anymore. Duke begins to argue when Smiley enters with his gang armed with all their weapons.

Thoughts: Overall, a good issue that returned to some character development of our featured Robins. I really felt that this issue went back to how the series started last year with Robin message boards and texting which is what made this series feel more “real”. Although it felt like nothing really happened in the issue (again) and was just setting up something bigger (again), at least we were given some of those elements of the story that set it apart when the series launched.

Corona’s art hits the mark again with some particular disturbing imagery like Smiley caught on camera shooting up a comedy club or walking through the school doors with a group of would-be school shooters.

With the series most likely ending with Rebirth, I looked back at what this series has delivered overall. This issue helps with that by giving us a taste of what the series was at its beginning with a group of kids messaging and getting together to take on something bigger than themselves. The overall goal was ambitious and, unfortunately, even with five or six “main” Robins, it was too packed to give really good character development which has been too bad, but we also have not been able to see the extent of the Robin movement. Now, I don’t want to jump the gun here given that we are probably going to get a Robins vs Jokerz brawl very soon but it is the downside to having a title with so many characters.

All that being said, Bermejo has given us an issue with some particular “real” scenes featuring gun violence and mass chaos which goes back to him wanting to make something grittier in Gotham. The set up for next month is there and I am looking forward to seeing ALL the Robins come together.