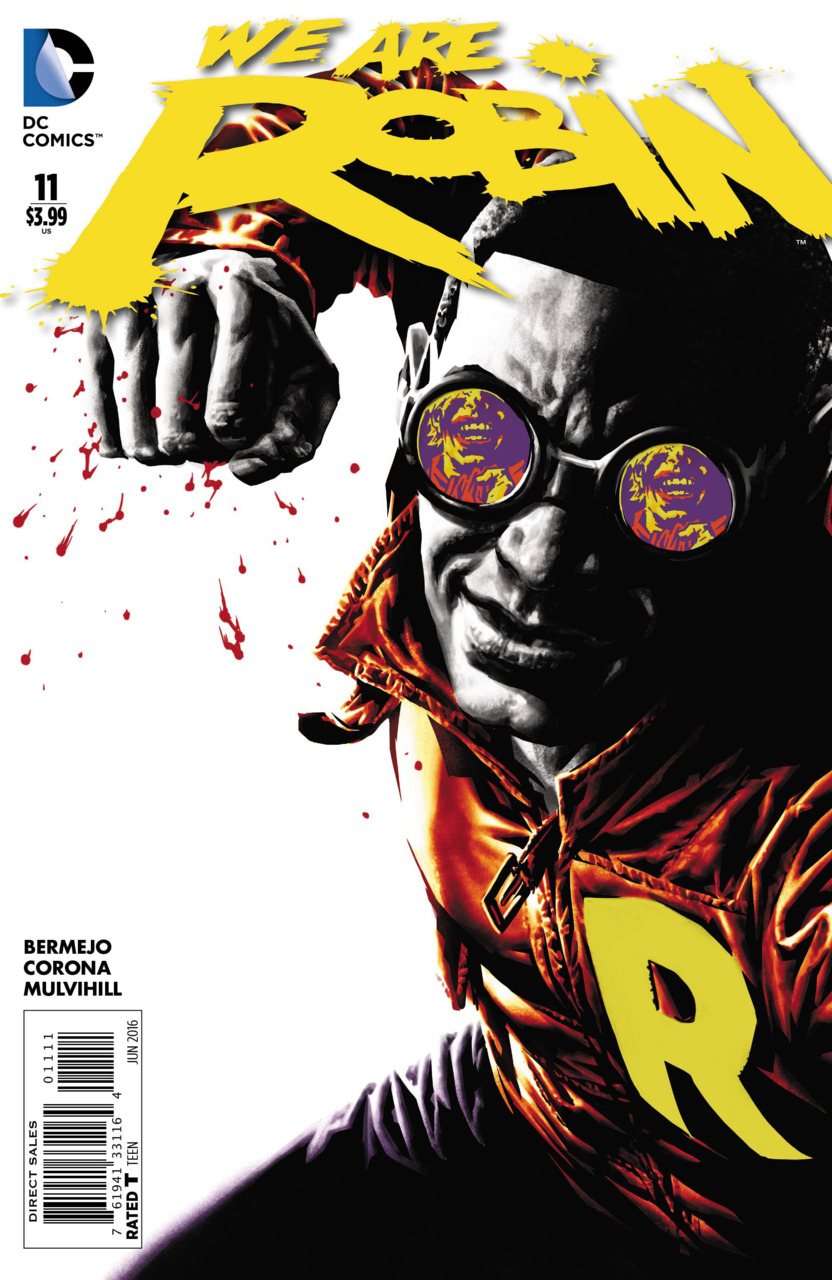 Synopsis: Opening in the apartment of Dax Chill, his grappling guns are discovered by his mother. She scolds him and makes him promise not to end up in jail like is father. Dax gets an alert regarding Smiley’s attack on the school and leaves the apartment saying “no Chill is ever gonna fire a gun ever again”.

At Middletown High School, Smiley and his gang of Jokers begin terrorizing the school’s staff and students. Caught in the middle of the attack, Duke and Riko hide in the bathroom to try and come up with a strategy in taking down the gang. Riko has some gadgets on her and a random student puts them to use when she tases a Joker.

Meanwhile, Izzy is racing to get to school when she gets an alert of the attack on the Robin message board. The messages stop her dead in her tracks and cause her to hesitate.

Back in the school, Smiley rounds up all the students and teachers into the gym and ends up pulling aside the principal after his attempts to reason with Smiley and calling him by his real name, Johnny Bender. Getting frustrated with the principal’s attempts, Smiley takes the school’s staff upstairs for additional “disciplining”. Duke and Riko attempt to follow but they realize that it will be difficult to get close since the Jokers all have guns. They receive word from Dax that he is on his way. While Dax attempts to find a way into the building, Alfred is seen in the Batcave monitoring the situation.

Having raised enough commotion and increasing social media traffic, the Joker Gang now finds the school surrounded by the police. Despite his followers showing some hesitation, Smiley relishes the presence of law enforcement and wants to use this opportunity to “school” them.

On the rooftop of an adjacent building, Izzy meets up with Dax and they prepare to breach the windows where Smiley is holding the teachers at gunpoint. The Robins all converge on the room where Smiley is at just as police are about to breach the school’s doors. They receive a message from The Nest (Alfred) telling them to stand down and let the police handle it. The Robins ignore it and charge in and manage to disarm the gang.

As Bender and his gang are being arrested, the Robins meet up with a disguised Alfred who asks them if they even listen to his messages anymore. Duke tells him that they are following their own orders now and that they will continue the fight together.

Thoughts: After finishing this issue, I had forgotten that there is still one more for the title before Rebirth. I noticed on the solicitations that the final issue is still dealing with Smiley and his gang. That is a little disappointing to me since this issue felt like a good wrap up of the arc.

Bermejo continues to draw parallels between this title and current society. Duke’s running monologue about guns and the ease with which people can attain and use them. It was interesting to see someone else in The Batman Universe come to the realization as to why Batman hates guns and will not use them. It is nothing new in regards to the theme and rule against guns for those familiar with Batman and his characters. Here in this more gritty story about street-level vigilantes, we see someone who does not have the years of training like Batman come to still respect the rule against firearms and why they are bad for society.

Corona delivered another solid issue regarding the artwork. No major changes in the art were seen in this issue compared to past issues but Corona’s focus on the guns in many panels only helped to heighten the attention to the main theme against the use of firearms. Many times the gun in a Joker’s hand was given its own panel or the vantage point would be from behind or in front of the gun.

Overall, I found the issue suspenseful and certainly relevant to the times we live in today with school shootings and a major focus on gun violence. Although not sure how this story still has another issue to flesh out, I’ll look forward to, hopefully, a solid ending to the series.