Lee Bermejo Talks “We Are Robin” 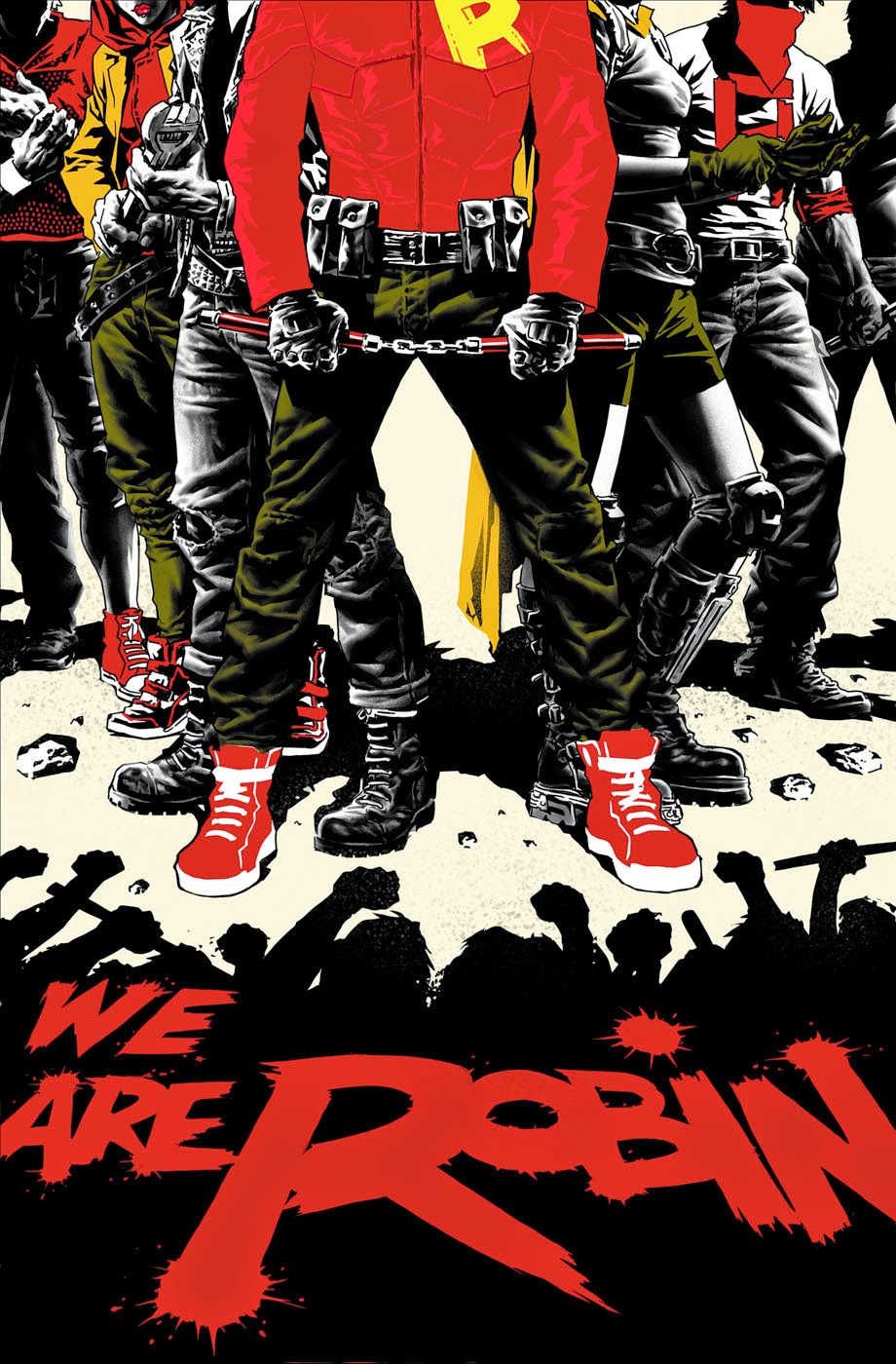 We Are Robin by writer Lee Bermejo and artist Jorge Corona just started its first story-arc last month when the title joined the two dozen other new publications that were part of DC’s June “mini-relaunch.”  The story follows Duke Thomas who has been seen both in Batman: Zero Year and Batman: Endgame in the pages of Scott Snyder’s Batman.  However, with his parents missing after the events of Endgame, Duke is now on his own fighting off bullies in school and dealing with the inadequacies of Gotham’s foster care system.  However, it’s not long before he encounters other Gotham youths and together they put on Robin’s iconic yellow, green and red colors to fight crime together.

With the first issue recently released, writer Lee Bermejo conducted an interview with IGN where they discussed the original pitch for the title as well as what we can expect both from Duke’s adventures and the possibilities of future interaction with Batman and others in the Bat-Family (including former Robins).

Below are some excerpts from the interview.  You can follow the link above for the full transcript.

IGN Comics: We Are Robin is a very different book from anything else that DC’s putting out. I’m curious to hear the pitch for this book.

Lee Bermejo: The pitch for this book was something very different, and it was a couple years ago actually. I started talking to [editor] Mark Doyle about this book back when he was still working at Vertigo, and it was a Robin story. At that point in time, they had just started the New 52 stuff, and it didn’t really fit in anywhere. We couldn’t find a way to make it work. Then last year Mark got back in touch, and I think he had come up with an interesting solution for how we could kind of approach it in a different way — but it really kept the feel that I had for the original Robin idea — and that’s what it eventually became: We Are Robin. So the concept really was born out of that, out of just collaboration with editorial.

IGN: Was the pitch essentially “We’re going to have a gang of Robins in Gotham City”?

Bermejo: Well, the whole thing was really about me trying to figure out the sidekick thing. That’s always been a concept that didn’t work for me. It felt very antiquated. It was something that came out of 1940s pop culture, and I couldn’t understand how to make that work realistically — and I say “realistically” with a quote/unquote, because I don’t necessarily adhere to the “everything needs to have an explanation” thing. When I say that word, I mean, if you’re taking an approach that’s a bit more grounded, how can you find a way for that idea to make sense. For me, the solution to that was that there isn’t just one kid who’s on the street dealing with this. I really liked this idea of Robin being more of an undercover agent than a traditional sidekick, jumping around on rooftops beside Batman. That opened it up enormously, because then you could have all different kinds of kids from different backgrounds to be possible allies in that way. So that’s what I thought was really intriguing, was this idea of being able to not adhere to the confines of what people traditionally think about with Batman and Robin and their relationship — specifically who should be Robin.

IGN: So far there’s no Batman in your book. Do you think Robin works without Batman?

Bermejo: Yeah, I actually do. I think that, now, these characters in general are bigger than just the characters themselves. They’ve taken on a quality that’s a little bit more mythic. I think that in the zeitgeist of that world, they would very much be a part of the citizens of Gotham City in every way. Batman is a concept that is real to them. There have been other Robins, multiple Robins. So I think in that way you respond to that world by thinking about yourself as being a part of it, related to it. I think it makes sense to me that, if these characters have existed for some time, then kids would have a relationship with them that wouldn’t necessarily need to be a direct relationship.

IGN: Are we going to see any actual Robins show up in this story? There are so many: Dick Grayson, Damian Wayne, Tim Drake, Jason Todd…

Bermejo: Oh, I think it’s safe to say there’s going to be many a guest star in this book. [Laughs] I wouldn’t go so far to say it’s going to be a guest star an issue — that’s not the case — but they just solicited issue #4 with Batgirl on the cover, so I don’t think it’s any secret now that Batgirl is going to show up. He could definitely interact with Batman at some point. Yeah, I think there’s a very good chance that there will be an interaction or two with a Robin.

IGN: In the end of the first issue, there’s a guy in a bunker. It’s hard to tell whether he’s a hero or a villain. Could you shed any light on that?

Berjemo: I really can’t say. That’s really spoiler territory, yeah. But that’s definitely something that will come out in the book as it move forward.

We Are Robin #1 is available now.