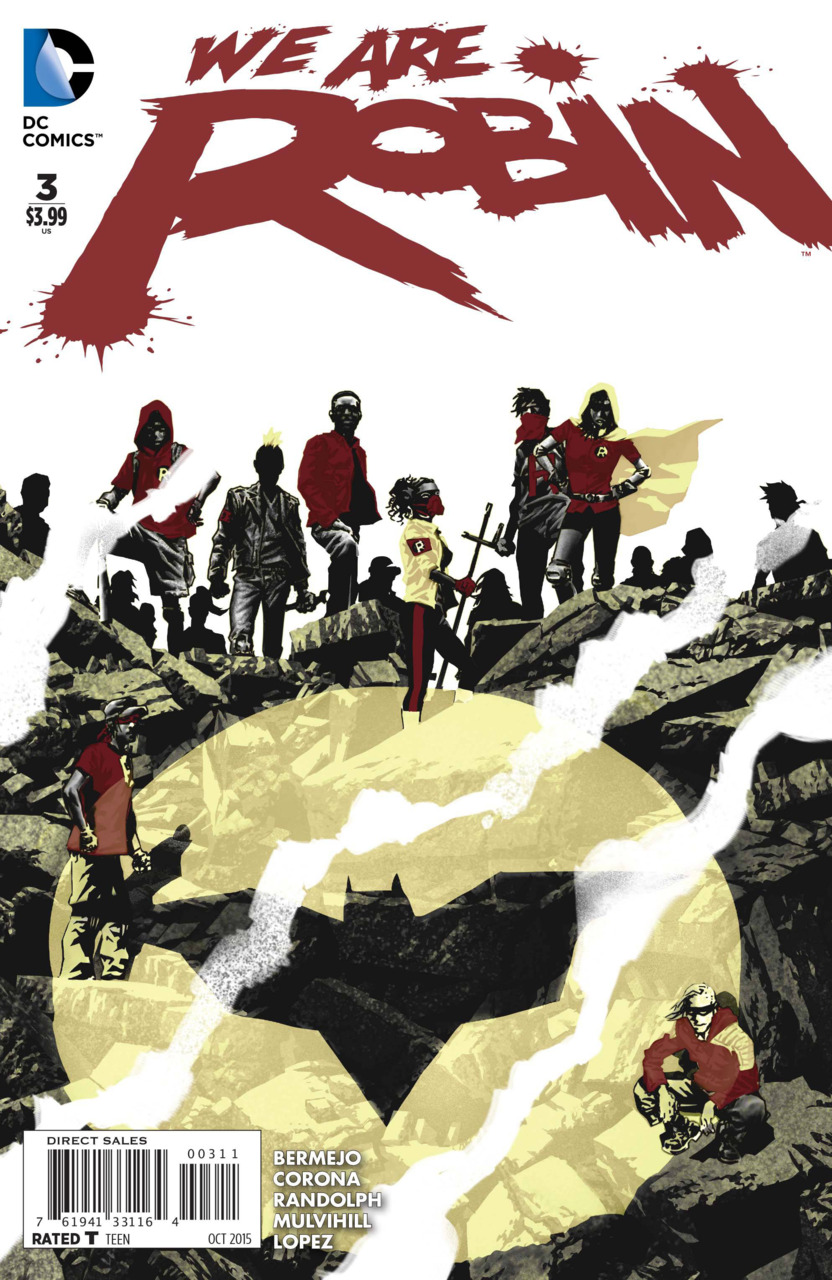 I was a little unsure of this series when it was announced and was not completely on board even after two issues. However, this issue totally hooked me with both the action throughout the issue and the intense consequences within the final pages. The whole issue was like the final moments of a summer blockbuster where the heroes have to defuse the bomb and they only have minutes left. Of course there is a major fight going on in the streets which just adds to the action and excitement.

I was caught up in the excitement of the issue so when Robin Troy decides to stay behind to defuse the final bomb and dies in the process, I was completely caught off guard. It was not what I was expecting at all. When reading comics, a death scene can sometimes be predictable. With kids involved as the main characters, it is hard to imagine that the teenage hero is going to buy it. This just shows that Lee Bermejo is going to make this series fun but not without real character development and serious moments. He has said in interviews that Jason Todd was one of his favorite Robins so I guess it should not be a total surprise that, in only the third issue of his series, he features the death of a Robin in the line of duty.

I was not entirely surprised when Alfred was shown to be The Nest, but the creative team delivered it in a heartbreaking scene of Alfred saying he failed to bring “another” home.

Another aspect of the writing that is fantastic is showing us daily problems that teenagers regularly face (food choices, displays of machismo, etc.). We get to see that these are normal kids trying to tackle problems much larger than themselves to better their city.

Along with the writing, the artwork was great on this issue. The coloring helped emphasize certain scenes and delivered the perfect tone for each panel. I love the penciling of the different Robin designs. That was one aspect of this series I was most looking forward to and the art team has not disappointed. Each Robin has their own personality and their costume design reflects that in some way as well.

Overall, I really liked this issue both for its art and its unpredictable storytelling. It is clear we will not be getting a lighthearted book but more of a thrilling story of young heroes with a real mission and real consequences.

Synopsis: The issue begins with Shug-R getting on her computer and getting the message from the team that they need help defusing the bombs that had been planted by the homeless army from previous issues. In the subway, Duke is having trouble connecting with The Nest while the team analyzes the bomb. They are interrupted by an oncoming train but finally get a message from The Nest with steps to defuse the bomb.

Above ground in Gotham, the homeless army begins attacking citizens and rioting. A Robin (codename “Redbird16”) is asking for backup to handle the army but decides to intervene while waiting for backup.

Back underground, we see both teams of Robins at separate bomb sites begin following The Nest’s steps to defusing the bomb. It becomes clear that Duke and his team do not have a bomb that meets the description The Nest is sending defusing instructions for while Dax and other Robins do have one.

On the streets, Redbird16 is being overwhelmed by homeless when backup finally arrives to turn the tide.

Dax finally cuts the wire on his bomb and is able to defuse it. Duke’s team is still having no luck with theirs.

Batman arrives at the fight between the homeless and the Robins. After dealing with some of the rioters, he turns his attention to the Robins and orders them to leave even as they try to argue that they were only helping.

In the subway, Duke receives a message for the team to get on a “Robin” train and leave the station. Troy decides to stay behind and try to defuse the bomb. The team yells for him to get on the train but the doors close and it is too late. Troy cuts the wire and the bomb detonates as the train leaves the station.

As the team mourns the loss of Troy, we see Alfred in the Batcave and it is revealed that he is The Nest and the one who brought them all together. In the final panels, Alfred states that he failed to bring “another” home and that The Nest must go to the Robins.