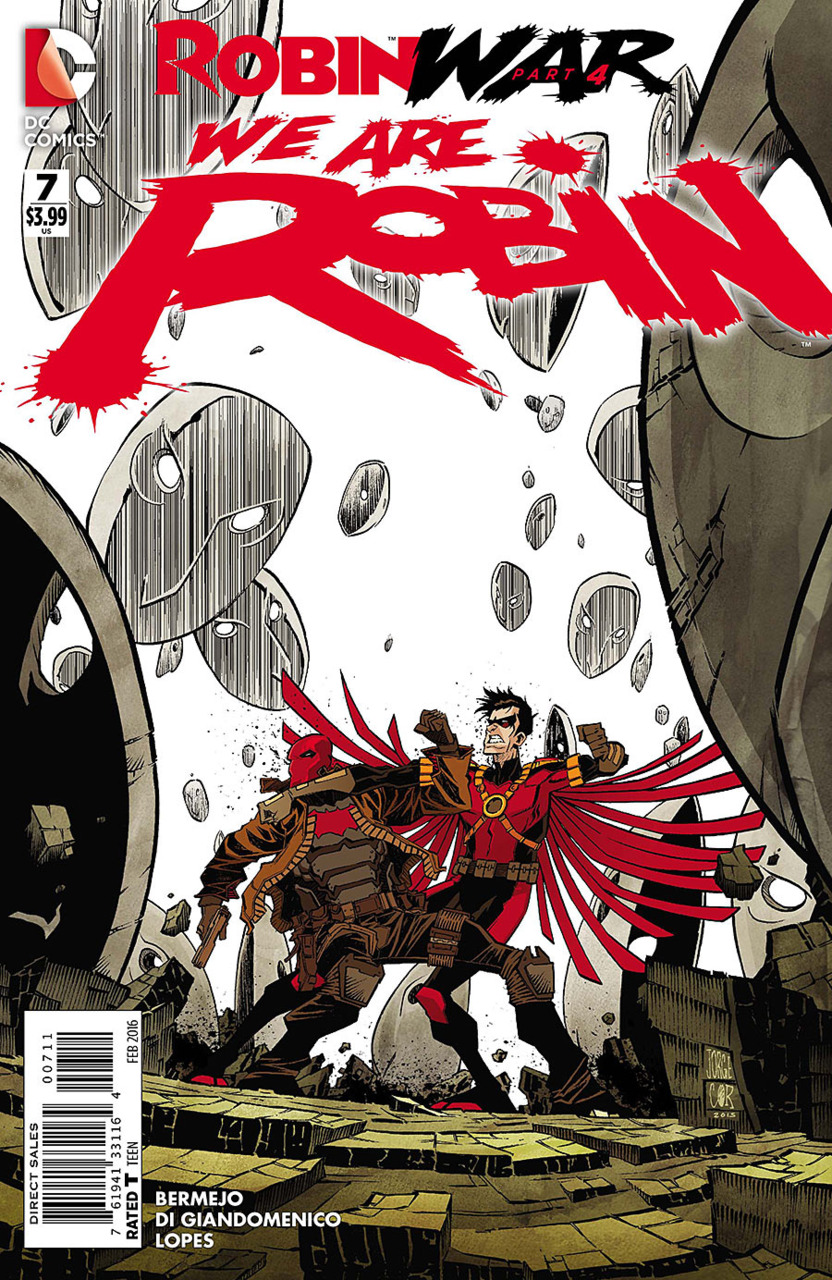 Opening with a flashback, a young Dick Grayson is performing with his parents in Haley’s Circus. He completes an amazing acrobatic feat as the crowd cheers. Returning to present day, Dick and Gordon are investigating Councilwoman Noctua her unlawful treatment of the Robins. As they snoop around her office, the two discuss the Gordon’s reaction to Batman enlisting a teenager in his war on crime. Gordon compares his initial reactions to how he adapted and came to realize the importance of Robin.

They find blueprints to “The Cage” and Dick realizes that the Court of Owls is behind it. They decide to split up and Dick goes to see the Court while Gordon says he will check on the Robins.

At The Cage, Duke’s inner monologue discusses how his search for his parents led him to finding a cause in the Robin movement. He questions his sanity along with everyone else’s given how “crazy” it is to be a Robin. His monologue is cut short as he begins to argue with Damian. Damian continues to call them all amateurs and tells Duke to focus so they can find a way out.

Damian sees that the guards have brought Red Hood and Red Robin out of their cages. The guards announce that the two must fight to the death or the other prisoners will be executed. The two begin to fight. Tim and Jason trade blows and insults but, eventually, Damian notices a pattern to their moves and tells Duke that they are pulling a “Grayson”. Suddenly, Jason launches Tim into the air and Damian yells for everyone to stick their hands out of their cells. Tim then uses each Robin to propel himself up into the rafters to disconnect the cages’ locks.

The Robins all descend from the cages and subdue their jailers. They make it up to the roof only to find multiple Talons waiting for them.

I enjoyed this issue but there was not much that actually happened other than a cool escape sequence. Don’t get me wrong…it was a great scene which the artwork really helped to pull off. It was also great seeing all the Robins work together to free themselves and not just relying on the “pros” to save the day. However, the overall issue just did not move the plot along as much as I was hoping it might.

Dick and Gordon found the clues to point to the Court of Owls being the main villain…so no surprises there. Tim and Jason were not actually fighting and had an escape plan the whole time…no surprises there. A group of Talons were waiting to kill any escaping Robins…also no surprise (and very much expected given the Court’s last fight with the Bat family). So, overall, nothing major or surprising really took place.

Now with all that said, I still enjoyed the issue I just was expecting more in regards to plot development. Each issue has been a lot of fun for me and I am glad the 75th year of Robin has been given as much love as it has with the multiple stories honoring the character. The Robin War, as a whole, has been really entertaining for me and I am still very much onboard and excited for what is to come. Regarding this issue, I was just “whelmed” (reference from Young Justice that fans of the show should know).