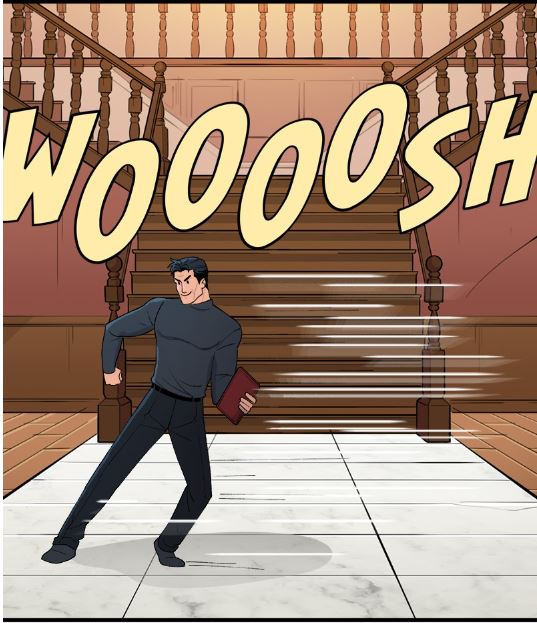 Steph: Have you been reading Wayne Family Adventures?

Ian: Every week on Wednesday nights!

Steph: What did you think of episode #58, Clean Up? That was pretty silly.

Ian: A Duke and Alfred episode! Very roommate sitcom humor stuff, but it perfectly suits living with a butler!

Steph: I think it made sense for Duke being the butt of the joke in this one because 1. he’s the newest Bat-Family member to move into the mansion, and he’s not used to hosting galas (like, who even is used to it?), and 2. He’s a teenager. Even though he’s a vigilante, cleaning up after yourself doesn’t traditionally save lives. 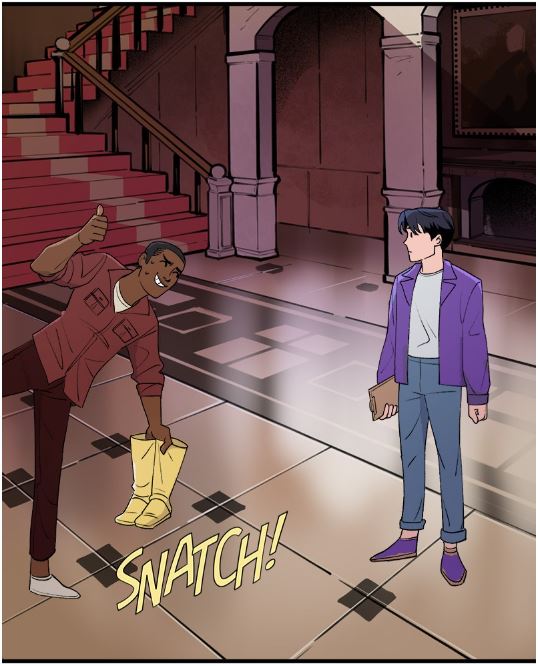 Ian: It also highlights his skills as a vigilante – such as speed, strength, and agility! 🙂

Steph: And memory! Though…Duke needs a locker or something. Speaking of silly mess-ups, what did you think of episode #59, Home Alone?

Ian: I never knew Bruce was such a big fan of Tom Cruise! Though sliding on floors is simply super fun.

Steph: I love seeing his human side, and when would that be more likely to come out than when he’s home alone?

Steph: For sure. Though, I feel like Alfred would know the dangers of letting him make his own meal and would have left him some food. One thing that tickled me a lot about this episode is all of the notes on the food in the fridge.
Tim’s coffee pot of cold coffee, I’m assuming Damian’s bag lunch (“DO NOT TOUCH”), and Steph’s “please” were all lovely touches. 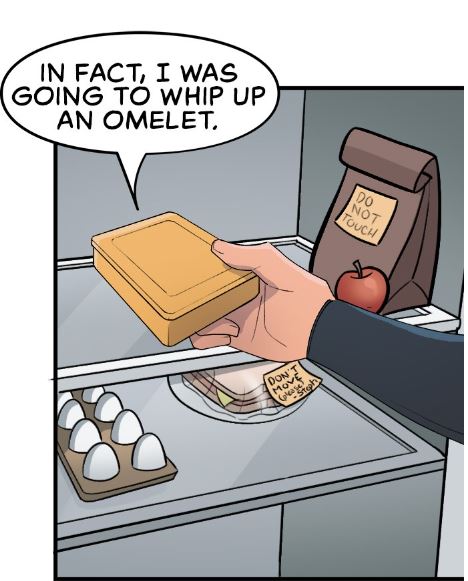 Ian: Yeah. Perhaps it’s too enabling/co-dependent, but I feel Alfred would always have a little tray of cucumber sandwiches for Master Bruce when he goes away. Or at least a cucumber, some bread, and cream cheese!

Steph: YES! I made some a while ago and have been so jelly that the Bat-Family gets them on the regular.

Ian: So fresh, especially if you have some nice herbs for garnish!

Ian: Yep! And very relatable, even for those of us who can cook! Who hasn’t gotten caught up in important business…or just a YouTube video while cooking something? 🙂

Steph: I know, right? The next episode, #60 What Matters Most Part 1, was another more serious episode. I will say I was not a fan of the art in this one at all. I know it’s the same guy who’s done the episodes so far, but something about Harper’s civilian character is very boxy. Maybe it’s just her shirt.

Ian: Agreed. Her face doesn’t have the same, more appealing look that most of the other characters have. I appreciate that they’re trying to make her stand out, but it feels less intentional and more accidental that she looks overly rough, at least to me.

Steph: Yeah. What did you think of her relationship with Steph? I really can’t tell what it is here, but it seems like they are leaning more toward the romantic side. Is this in canon at all? (not that WFA has to follow canon at all, just curious.) 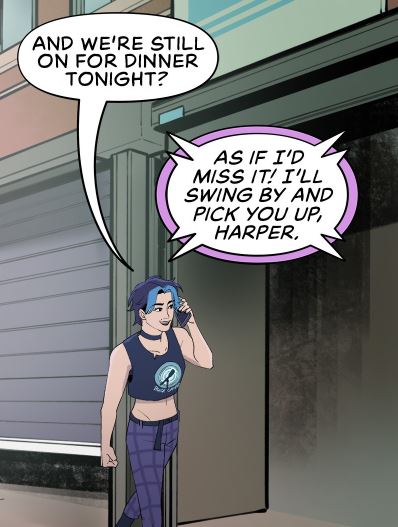 Ian: Interesting. I didn’t get that feeling at all. Harper is bisexual in canon, though we’ve never seen her date anyone. The animated Young Justice had her sort of date (cheat on) with Halo. I didn’t get a real sense of the difference between the way Steph interacted with Harper and the way she’s interacted with Cass, Tim, or Duke.

Steph: Very possible. I honestly wouldn’t be surprised if it goes either way, but that was the vibe I was sensing.
Where do you think this Harper story is going? It reminded me a lot of the Bruce/Fear Toxin story from a few weeks ago, fighting the bullies that never stop.

Ian: Interestingly, none of the DC Webtoons have leaned too heavily on romance so far. There have been some relationships – Duke and his three-episode girlfriend, Bruce and Selina, Tim and Bernard – but it’s not really a long-running or oft-referenced element.

Ian: I honestly have no clue where Harper’s story is going – wracking my brains for what they could be doing since Harper is an electrician in the comics, and that doesn’t really connect to the kinds of community skills she’s talking about in this story.

Steph: I wonder if she’ll start teaching classes like “self-defense” or “self-love for Bullies.”

Ian: I think the first one sounds pretty likely to me. If they bring out her connection to Leslie Thompkins as they have in the comics, the latter might happen! Speaking of which, I feel that Leslie is a perfect character for this series…

Steph: Yes. I will say as little as I liked the “Punchline” backup story for the Joker comic series, teaming up Harper and Leslie was a great idea. I think they worked well together.

Ian: And the slice-of-life style of this series would really allow Leslie to take some meaty roles in the family adventures!

Steph: I’d love that! Any more thoughts on this batch of comics we’ve read?

Ian: I think it’s a very good idea to flesh out Harper early on in the season after her funny introduction in the pilot episode. So far, I think we’re seeing that Wayne Family Adventures will continue to be the light-hearted, warm, and appealing slice-of-life comic strip we came to love for those first fifty-odd issues. I am very excited to see what new shenanigans our heroes get up to and any new characters who could be introduced (Leslie Thompkins, DC, hint hint!)

Steph: Agreed! I love how the series manages to add some character development but still be, overall, pretty light-hearted and short. It’s a great combo.

Ian: And the Easter eggs to characters’ past are always golden to those of us who love the mainstream comics, too! This is why we try to highlight them when we see them in these reviews!

Editor’s Note: You can find Batman: Wayne Family Adventures #58-60 and all other past chapters exclusively on the Webtoon platform. You can find all other reviews of the series here at The Batman Universe.