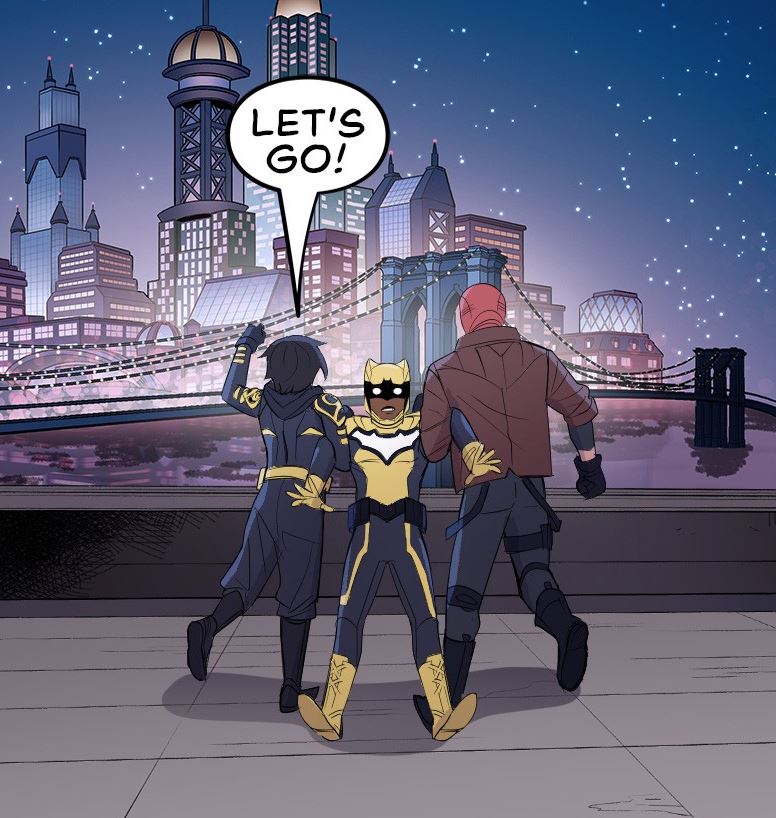 Steph: Ian! Another three weeks, another three amazing episodes of WFA to review! Are you ready?

Ian: I’m so ready! And what three weeks we have!

Steph: For sure. The first two got me right in the feels. Let’s start with the first one, #64 The Choices We Make (Part 1)

Ian: This is a hefty two-parter!

Steph: Tim and Damian’s animosity with each other.

Steph: It has. I felt like the first episode gave a good status quo of the situation and showed Tim’s feelings on the matter and also his resolve to fix things because, as is, it’s dangerous to their safety and any mission they do. And, of course, Steph and Tim’s friendship appears healthy and well-maintained post-breakup.

Ian: Yeah. I’m still sad, but I appreciate that they both know each other so well and give each other good advice. 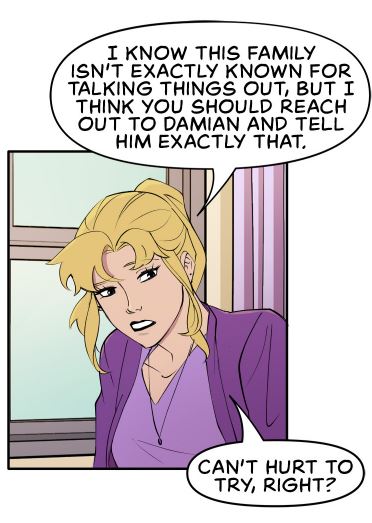 Steph: I feel like DC likes that canon Tim/Damian don’t get along and keeps it at that.

Ian: Canon (calling back to Tim, giving Steph encouragement in her two-part arc), Tim and Damian never sit down and talk. Since WFA is both goofier but also a bit more mature (in that it deals with everyday problems and doesn’t let the world-ending catastrophe get in the way of character growth), it’s really, really nice to see this kind of thing. In fact, I still think that this emotional, growth-oriented stuff is exactly why WFA has millions and millions of fans. And MAYBE canon could learn a bit from it? 🙂 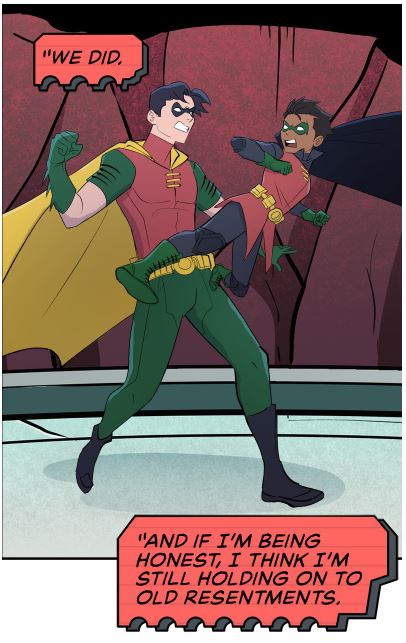 Steph: For sure! I love that the comic seems to take the canon personalities and relationships we love and applies HEALTHY life management tools. Very refreshing.

So in #65, The Choices We Make (Part 2), we get the confrontation, and it starts as well as we could imagine but ends so well. What did you think of Damian and Tim’s discussion?

Ian: I thought it was really nice seeing Damian admit his vulnerability. It’s something that too often gets lost, particularly at the beginning of the n52, where a lot of the real damage was done to the current state of the Tim and Damian relationship was done.

Steph: I loved how naturally it came out! Like, he started talking like the little brat he is, but the more insults he was throwing at Tim, the more the truth started coming out. 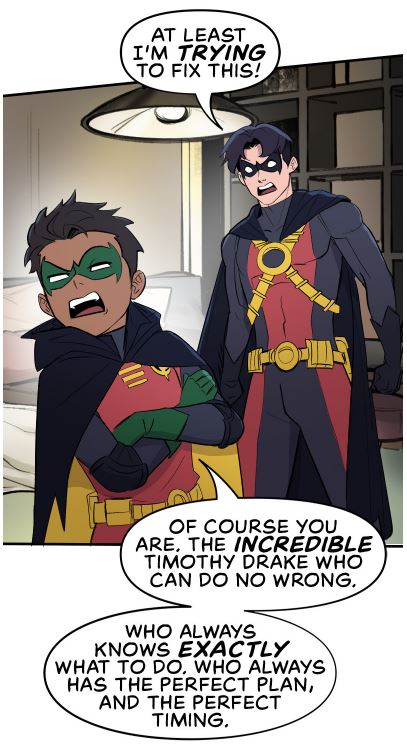 Ian: Yup. Very nice dialogue writing in this one particularly. What was a favorite thing about this confrontation for you?

Steph: The penny dropping for Tim. He can’t see it, but Damian’s lip is quivering. It’s the turning point for their whole relationship. Though, I did love Damian’s comment on the over-dramatic meeting atmosphere.

Ian: That great combination of art and writing!

Steph: What was your favorite part?

Ian: I think it really was Damian’s vulnerability, and Tim, instead of pouncing on that as a weapon, affirms Damian and heals the breach a lot. Really good stuff. 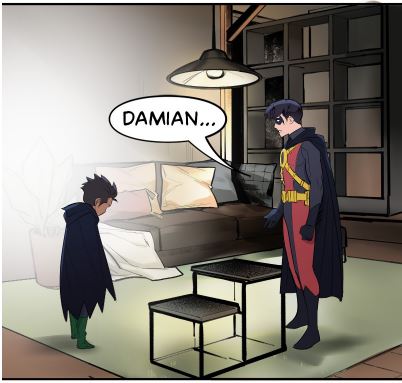 What about the last episode, #66 No Doors Allowed? Here we have another silly episode about Cass and Jason showing Duke the error of his ways, only to be schooled by him on how to break from Bat-predictability. 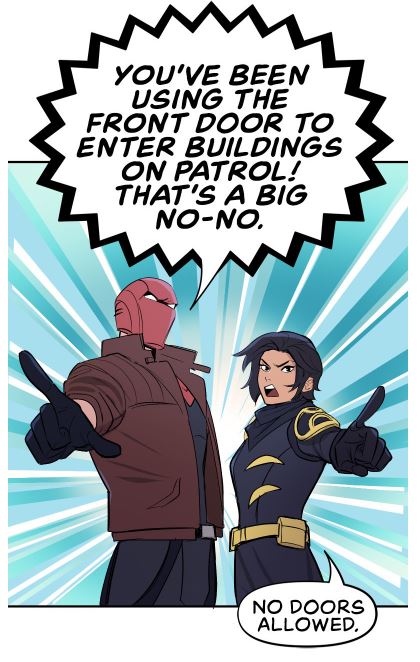 Ian: After all that emotion and stuff in the Tim and Damian arc, it was so nice to kick back and cut loose with the silliest of meta concepts, “how to enter a room as a Bat-Family member.” Really reminds me of the great conversations about “monologuing” in The Incredibles! Also, the balance of the characters is nicely handled. You have Tim, Steph, and Damian in the last two, and then Duke, Cass, and Jason in this one spreading out the family so everyone can see their faves!

Steph: Yes! There seems to be a great balance of the main characters, with a sprinkling of the supporting ones.

Ian: Do you agree with Cass and Jason, or Duke in the “conflict”? :0

Steph: Oh man, Duke, totally. Less property damage, less glass to pick out of the suit, and more surprise!
How about you? 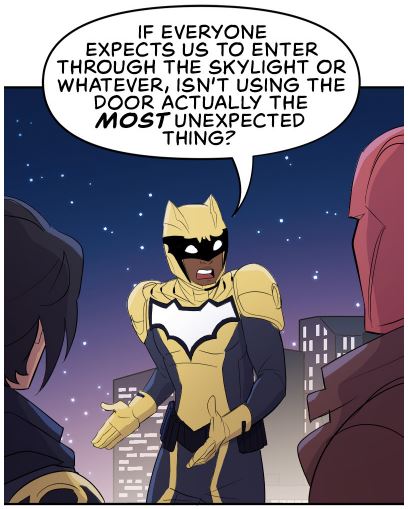 Ian: But it’s the Bat-Family way! You gotta enter with a BOOM! Theatricality! Deception! Shattered glass falling to the floor as you kick the cowardly and superstitious criminals in the face! Obviously, I’m a Cass and Jason sider here! 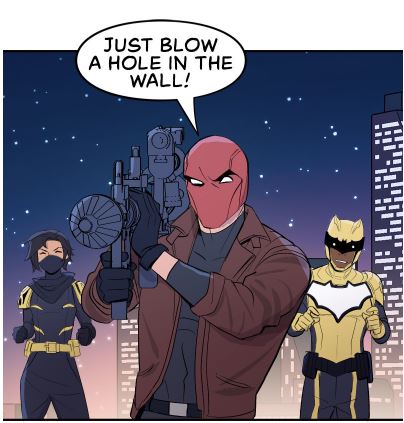 Steph: I see. I did love that, arguably, the more stubborn and set-in-their-ways characters outside Batman were willing to have their eyes opened to new ways of thinking. And, of course, Starbite killing it on art again.

Ian: Indeed! It’s so nice seeing Starbite still on art – I was worried that the new art team would completely replace them, but it looks like it’s more of a rotation, given the brutal schedule a weekly webcomic has!

Steph: Yes! I enjoy the other team, but Starbite takes it to a new level. Well, I can’t wait to review the next batch with you. See you next time!

Ian: Thanks for reviewing with me! This batch was really great!

Editor’s Note: You can find Batman: Wayne Family Adventures #64-66 and all other past chapters exclusively on the Webtoon platform. You can find all other reviews from the series here at The Batman Universe.