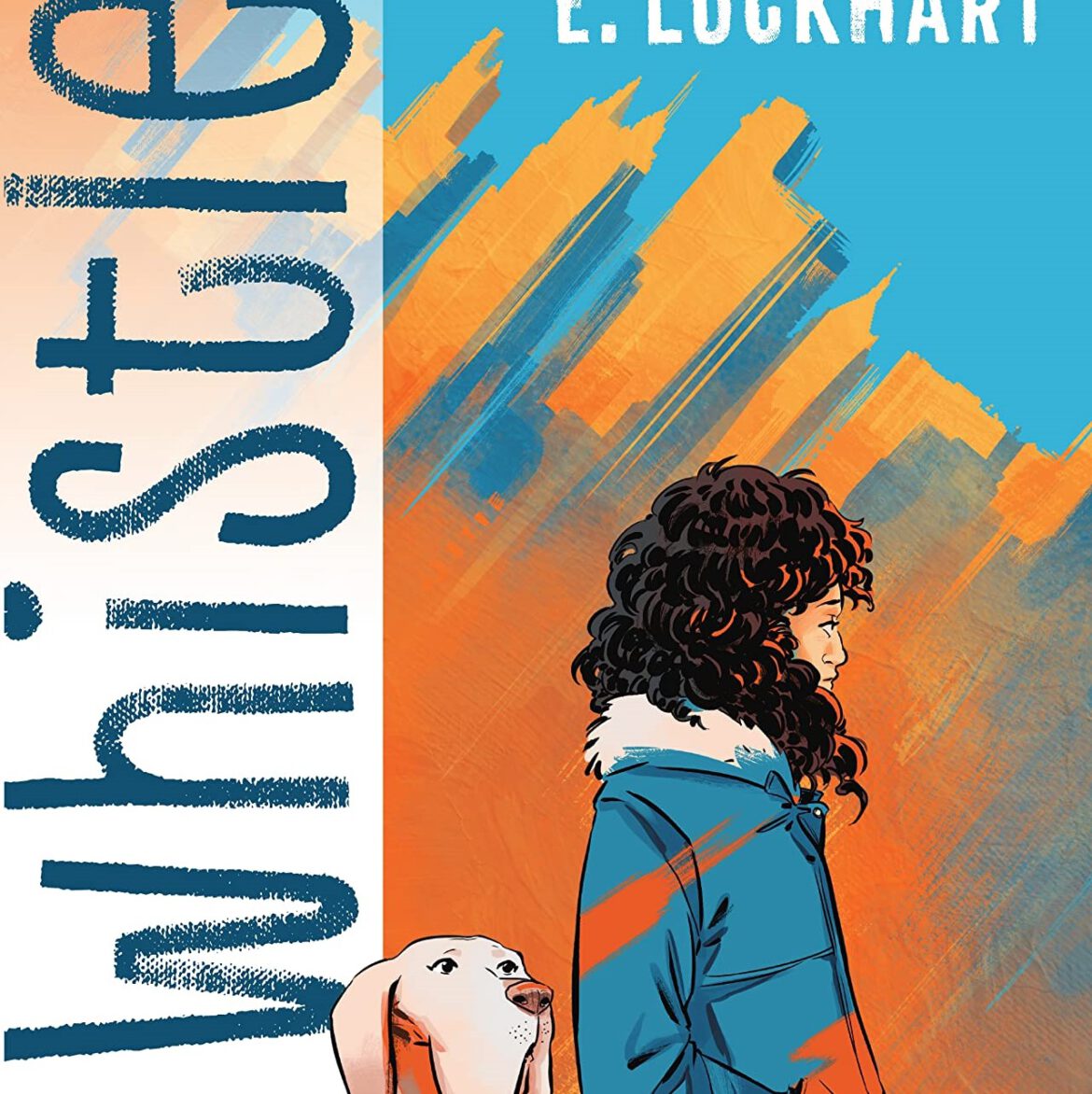 Overview: In Whistle: A New Gotham City Hero, Willow Zimmerman, a sixteen-year-old activist, becomes Gotham’s newest hero after an encounter with Killer Croc. This is a young adult story that takes place out of normal continuity.

Synopsis (spoilers ahead): As Whistle: A New Gotham City Hero begins, we meet Willow Zimmerman of Down River Gotham.  She is a sixteen year old high school student who is an activist.  This morning, she is standing outside her high school with a petition to fund the school system.  She is a little dejected because she is not getting the support she is hoping for.  A boy named Garfield comes up to her.  He asks her about the petition she is holding and he signs it.  The school day is beginning and the two go into the building.  The two kids hit it off very well with little hearts between the two visible in the air.  I believe these two are smitten with each other.

Willow invites Garfield to to try a Reuben.  He loves it.  On the television in the deli, a report of the latest Killer Croc killing plays.  After a brief conversation about Croc, The two kids leave, Willow takes some home for her mother.  A large dog comes up to the two kids, Garfield is a little scared but the dog is quickly found to be friendly.  Willow feeds her and named her Lebowitz.  She would like to keep her but unfortunately the apartment is too small.

The two separate and Willow fears she may have talked too much.  She likes Garfield.  On her way home she comes across the United Methodist Church.  It has been what is called greened, I wonder how that might have happened.  Willow has never seen this before but she has heard about it in the news.

Finally home, we meet Willow’s mom.  She is suffering from brain cancer.  She has to give up her job as a teacher.  She is also stopping her chemo treatments as well.  She is unable to afford them and they are really not working.

Next Monday, Willow starts her new job.  She is going to be working evenings at the Down River animal shelter cleaning the kennels. The work is hard but she loves helping the animals. A couple of weeks later, Willow attends a rally to save Down River.  Willow’s friends who are there do not even remember why they are there.  This really discourages the teen.  Later that day Willow meets Pammie Isley, assistant professor of plant biology at Gotham University.  Isley recognizes Willow as an activist and tries to strike up a friendship with the girl.  Willow however is not so sure about the drinks the professor likes.  Willow thinks she sees Garfield and heads off leaving Pammie with her plants.  Garfield tells Willow about his upbringing including growing up in Lagos.  He misses it but he does like some of the people in Gotham, in particular Willow.

After another exhausting night at the shelter, Willow comes home to find a puzzle box.  Willow remembers that her mom had a childhood friend by the name of Eddie Nachtberger.  He named himself E Nigma and her mom fell in love with him.  Unfortunately E was not that mature and he ended up dropping out of school and getting caught up in the drug and alcohol scene.  The two eventually split up but they stayed close even after Willow was born.  Willow figures out that it is a message from E and that he wants to meet up with her.

As Whistle: A New Gotham City Hero continues, Nigma is waiting for her.  He wants to reconcile with Willow’s mom and he wants to help them financially.  Willow admits that they need money but Naomi, Willow’s mom will not accept it, she holds a grudge.  E gives her some cash and Willow puts all but $200.00 in the family account.  She uses the money to pay off bills and she goes to school.

It is Saturday and Willow’s is making cinnamon rugelach.  She plans on giving them to E Nigma but she lies to her mother saying they are for a bake sale.  She also lies about her new shirt Naomi catches her wearing.  Naomi received an email from E but she is afraid to respond to his request to help.  That night Willow goes to visit E Nigma.  E Nigma has an offer for the girl.  He is involved in poker games with some buddies of his.  They normally play at various secret locations but his game runner was killed.  The runner arranged for the locations and catering for the poker nights.  E Nigma wants to make Willow his new game runner, it is illegal but he will pay her handsomely.  Willow learns that one of E’s buddies is the plant biologist Pammie Isley.  Willow agrees to E’s offers and Pammie takes her shopping for some new clothes.  Willow excels at her new job and lies to her mom saying that she got a promotion at the shelter, she stops working at the shelter.

Willow strikes up a friendship with Pammie while she distances herself from Garfield and Lebowitz.  With the new income, Willow takes Naomi to the doctor and they are able to revise her treatment plan.  On the way home, they find that Gotham Library is the latest building to be greened.  They stop and Garfield meets Naomi, unfortunately Willow gets wrapped up with her work messages.

Willow begins to have questions about what she is doing so she visits a synagogue to pray and reflect and on leaving she finds Lebowitz.  The two walk off but Croc shows up and attacks the two.  He has a beef with E Nigma.  Croc slashes Willow’s face and attacks the dog leaving both injured.  She is soon joined by Pammie who turns out to be Poison Ivy, the individual responsible for the greening of the buildings.  She calls 911 and leaves the area.

Willow recovers in the hospital and discovers that she has a strange power.  She is able to hear conversations in other rooms, particularly when she has a connection with the speakers.  She hears that E Nigma is involved in the greenings with Ivy.  She comes home and discovers that Lebowitz is in the apartment and she can understand what the dog is telling her while her mother just hears barking.  Naomi takes the dog in.  Willow also begins to exhibit the behavior of a dog probably for some humor in the story.  I found it to be out of place.

On returning to school, Garfield finds her and the two go out on their first date.  The two kiss at the end of the evening.  Willow discovers that Poison Ivy is continuing her attacks.  Willow and Lebowitz decide that maybe they can stop her so she begins training.  She also goes back to work for E Nigma.  Pammie and Willow also reconnect and Ivy explains that she has plant powers and how she gained them.

Willow learns that Nigma and his poker buddies are in on Ivy’s actions.  The next target is the deli, Rosen Brothers.  Willow also learns that she is able to summon the dogs in the neighborhood with a whistle.    The next day Willow decides on a costume and mask, the two “heroes” have to stop Ivy.  The day of the attack Willow in costume and Lebowitz in his costume collar stake out Rosen Brothers.  The two are attacked by plants and run into the deli to find Isley.  They start to fight and Ivy immobilizes the two with her vines.  She is joined by the Riddler, the alter ego of E. Nigma, Willow immediately recognizes him but the two villains fail to recognize Willow.  Riddler tells Pammie to kiss Willow to kill her, she whistle’s and the neighborhood dogs respond and free the two and corners Riddler and Ivy. Willow knocks out Ivy and tells Riddler that she is called Whistle and her partner is the Hound.  They will be there to protect Down River with her canine army.  She allows Riddler to escape but the cops find Poison Ivy and arrest her.

As Whistle: A New Gotham City Hero concludes, we see the new normal for Willow is to continue to go to school and work for E Nigma.  She continues to develop a relationship with Garfield and care fo her mom but now she adding her time as the masked hero the Whistle.

Analysis: I liked Whistle: A New Gotham City Hero. It was slow in a lot of ways and only picked up as a superhero comic in the end with the entrance of the Whistle.  I do find it interesting that other than Riddler and Poison Ivy, there are no appearances of the Bat-Family and I like that.  This story should not include them at all.  I like the focus to be on Willow and this is her journey, a journey that I note is not complete, she still works for Nigma in the end and Ivy does end up getting out of jail herself, Willow even recognizes that this will happen herself.  This ending leaves more stories that I would like to see told.

The art is interesting.  First I do not like the design of Pamela Isley.  It is a miss that she does not have red hair as I believe that that should be a large part of this character. Riddler is designed well.  This story uses a more realistic art choice and given the nature of the story as being somewhat grounded, I find that to be appropriate.  I do notice that Manuel Preitano seems to like to use a different color and detail design to several extra characters mainly involving the extras but also some of the lesser speaking characters as well.  I really am unsure for this choice other than to focus more on the main characters but two of the bit characters in the school are both drawn and colored with the detail that Willow and the other main characters are drawn with as well.

Editor’s Note: You can find this new original graphic novel and help support TBU in the process by purchasing this edition digitally either through Comixology or Amazon, or as a physical copy in a paperback form at Amazon.

This is a fun story that is not hampered in continuity and I would like to see more of these stories in the future. Overall, the story is great and I enjoyed the art. My only concern is how some of the side characters and extras are drawn.  If there is a purpose, I cannot see it.