Will the Real Batman Please Stand Up? 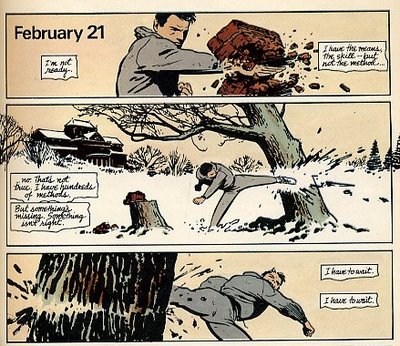 Unlike some of his superhero friends such as Superman, Wonder Woman or Aquaman, one of the main appeals of Batman is that he is a hero who could realistically exist. This is a fact acknowledged in The Dark Knight  and also in Frank Miller’s The Dark Knight Returns as Batman gathers a army of imitators who run around, less well equipped than the Dark Knight, taking on crime.

However, no longer is this just limited to comics and films now as a whole army of superheroes have risen up to imitate people such as Batman, Robin and even Kick-Ass and are gathering a large amount of publicity in the press. HBO is airing a documentary on August 8th entitled Superheroes which follows the exploits of a small group of superheroes in the US as they fight crime. Well, I say fight crime, but there is less crime fighting and more walking about talking to people and seeing if they can help them. Even so, they often cite Batman as inspiration. For example the UK superhero SOS says,

“I traveled far and wide, to places such a Naples, to research my film but its origins really go back to Batman.

“The Caped crusader didn’t have any superpowers but had courage, money and willpower.

“The point is, like the film Kick-Ass, anyone can become a superhero.”

So how possible is it to become a superhero? In this article I will be looking at the equipment and costing of becoming a Batman style hero and if it is even vaguely possible. Or is this something that people can be so ill equipped for its safer to leave it to the police? Before we start here is a disclaimer: This is intellectual exercise and is not intend as a blueprint on how do it if you do chose to follow it. I take no responsibility if you get shot, blown up, electrocuted, eaten or kidnapped by some one in clown paint.

So of course the first item that any Batman wannabe is going to want and need is a bat-suit. In the original TV series, Batman’s suit was a a simple cloth one pieces that could be torn or ripped easily. However with the addition of a yellow bat symbol on his chest there was a need to explain this and so it was decided that the idea was to draw gunfire to it and away from the less well protected parts. From this concept, the body armor (now known as Kevlar) was added to the rest of his suit to provide the full protection. Now this will be an essential part of your costume especially for dodging bullets. The good news is that Kevlar is readily available to buy over the internet from various companies. However the bad news is just for a new vest you are going to need £600.

So I am guessing that you have chosen to go for just a vest and hope you don’t get shot in the leg. The next thing you are going to need is a Batmobile. The Batmobile has been around as long as Batman and is just as iconic as the Caped Crusader himself. From the 30’s car, which simply had a giant fin on it, to the most recent incarnation in the films and in the comics with the high spec Batmobile. It has always been there and is always cutting edge. But is there a real life equivalent that a potential hero could use? Well thankfully there are two options that can be used depending on the effect that you are going for. The first is that of speed and nothing closer in appearance of a Batmobile in my eyes than the stunning Bugatti Veyron. This car certainly has the looks with its low ride profile and that grill at the front always remind me of the vent from the Batmobile in the 1989 film. Besides it would look awesome in black as well. it certainly has the speed as well that no criminal can escape. However the downside is that it only does 11 miles to the gallon and at 253 miles per hour it will burn through that twice as quickly so you had better hope its a short race. The price is also a massive come down as new it will set you back at least £1,050,000 as well.

However there is a another option and that is to buy a tank. Fortunately they are all completely road legal and able to use public roads. They also cost half the price with one website offering a tank for just £6000. This would be unstoppable in catching criminals. However it is not very likely to catch criminals as many tanks of the sort that can crush cars are limited in speed. For example a Chieftain tank, a great place to start for a Bat-tank, can only hit 48 miles per hour, so don’t expect to catch anyone. It is also not very easily hidden and if you turn up in one, you will be easily noticed.

So those are just a few of the pieces that would be needed to create a real life Batman. already the cost has grown depending on what you chose and that is not without going into other items such as gadgets and his training, which I shall briefly cover now. Batman has spend at least seven years training his body to the peak of fitness and has traveled all over the world searching for and training with the best in martial arts. While this sounds like a great thing to do it is for most people impractical. We have jobs, family and other responsibilities. Also sorry to disappoint, it is extremely hard to get into any reasonable and traditional dojo to study martial arts. When people go and study in Japan it is often a western style of training. In the western part of the world, anyone can turn up to learn a martial art. In Japan and other eastern countries, it is the instructors’ job to attract students. In Japan it is up to the student to show that he is dedicated enough to benefit from the training. This often takes the shape of having to sit outside the dojo waiting to be noticed. Often it won’t just be you as there will be many people vying for attention to be picked. Also those who do the martial arts are part of a monastic order, the most well known being the Shaolin Monks, but to study the art, it is required that you join the order before you can be trained.

The final two items to take a quick look at are two tools from the utility belt; the Batarang and the grapple gun. In the film series, the Batarang is turned into a ninja style throwing star. These are easy to find but also illegal to use or have without a license in many countries, so it puts pay to the concept of a secret identity. The other item is the grapple gun. There is currently a company who does sell a grapple gun but it does not have the ability to hoist you up and down. When I spoke to the company they said they would not sell to individuals so again it puts a hole in the plan.

So what have we found? Well the most obvious answer is that without a large cash sum and a lot of time, like Bruce Wayne, there is little chance of anyone replicating Batman. This means that many of the superheroes who exist will for now continue to walk about the streets trying to find crime rather than swinging from buildings. Personally I think you could just leave it to the police and spend the money it would take on equipping yourself out on well, anything.