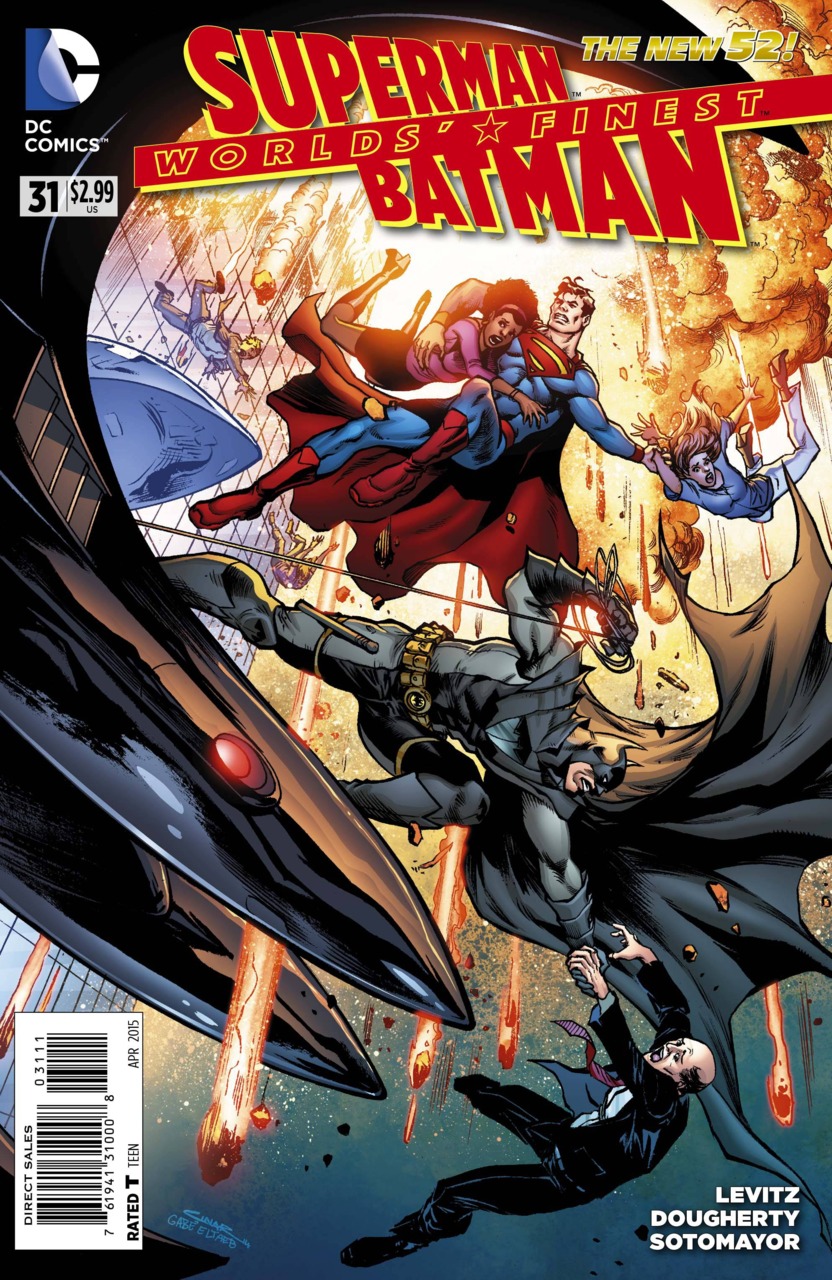 Issue 31 of Worlds’ Finest continues the story of Darkseid’s initial attack on Earth 2. We see Earth 2 as it was just prior to Darkseid’s invasion of Earth 2. Lois acts as our narrator. Satellites ate crashing down to earth destroying buildings on the ground as well as the communication systems that crashed with them. Pandemonium and panic ensues. Superman arrives above Metropolis and starts destroying the satellites in the sky as well as rescuing civilians from the crashing buildings of the city. Superman is not the only one saving lives, Lois pushes a firefighter away from falling debris probably foreshadowing her future as Red Tornado.

Lois continues to be a reporter and with the only tools she has left, a notebook and pen she tries to get the story. Lois continues to watch Superman attempt to do everything and muses that can he be everywhere he is needed. When it looked like that Superman would be overwhelmed, Batman arrives in the batplane with a net to catch the falling civilians. Superman is not alone, Lois muses that there is another “wonder” up there. In Earth 2 the superheroes are referred to as “wonders”.

Lois narrates that Gotham was not hit as badly as Metropolis, in fact no other city was hit like Metropolis. We see that Batman is not alone, his wife, Catwoman and his daughter, Robin are also on the scene providing ground support for the civilians of Metropolis. The two women see more satellites falling to their position and Robin sees Superman intercept the falling satellites in mid air. Robin and Catwoman still deal with the falling debris on the streets but are again saved by who they say is Superman but in reality it was Supergirl who saved them.

Both Catwoman and Batman separately wonder why there are more hits in Metropolis and Batman wonders if they and their loved ones are being targeted. Superman moves off to stop the satellites from falling as well as determining who is responsible for this disaster. Batman urges Superman to be careful which Superman responds that he is the invulnerable one and Batman should be the one to be careful. Lois finds a victim and leads him back to the Daily Planet building to put his story on video.

Supergirl leaves the city to return home where she is attacked from behind by the agent from Apokolips from the last issue searching for Superman. Supergirl attacks but is easily brushed off and the agent leaves through a Boom Tube.

Batman meanwhile tracks down Terry Sloan and enters his compound where he finds the kryptonite Sloan found on the Kent farm from the last issue and is immediately confronted by Sloan’s guards. Batman makes short work of the guards and leaves the compound. Sloan realizes that Batman did not discover the boy he was holding and is satisfied with this minor defeat as long as he keeps the boy’s existence a secret.

Lois arrives at the Planet where a guard tries to turn her away but it appears that this world’s Lois cannot be dissuaded just as her Earth Prime counterpart. She enters the building with a narration that entering the building was the last big mistake of her life. The Next issue is The End.

This is not a good jumping on point to this arc; I had to refer to the previous issue in several parts of my recap. Nonetheless I enjoyed this issue. I liked the narration of Lois as she comments on the characters relationships with one another during the rescue effort in Metropolis. It shows a familiarity these characters have with one another that are not evident or are nonexistent among the Earth Prime or the main DC universe’s counterparts. I enjoyed the way Catwoman and Robin worked together and the writer easily showed that this mother and daughter are not only a team but truly love one another. From reading other books such as Earth 2 and the Earth 2 World’s End books, I know how this story is going to end however, I am enjoying this ride. It is not a good jumping on point but for current readers it is an enjoyable read that delves further into the relationships of the world’s version of our heroes.