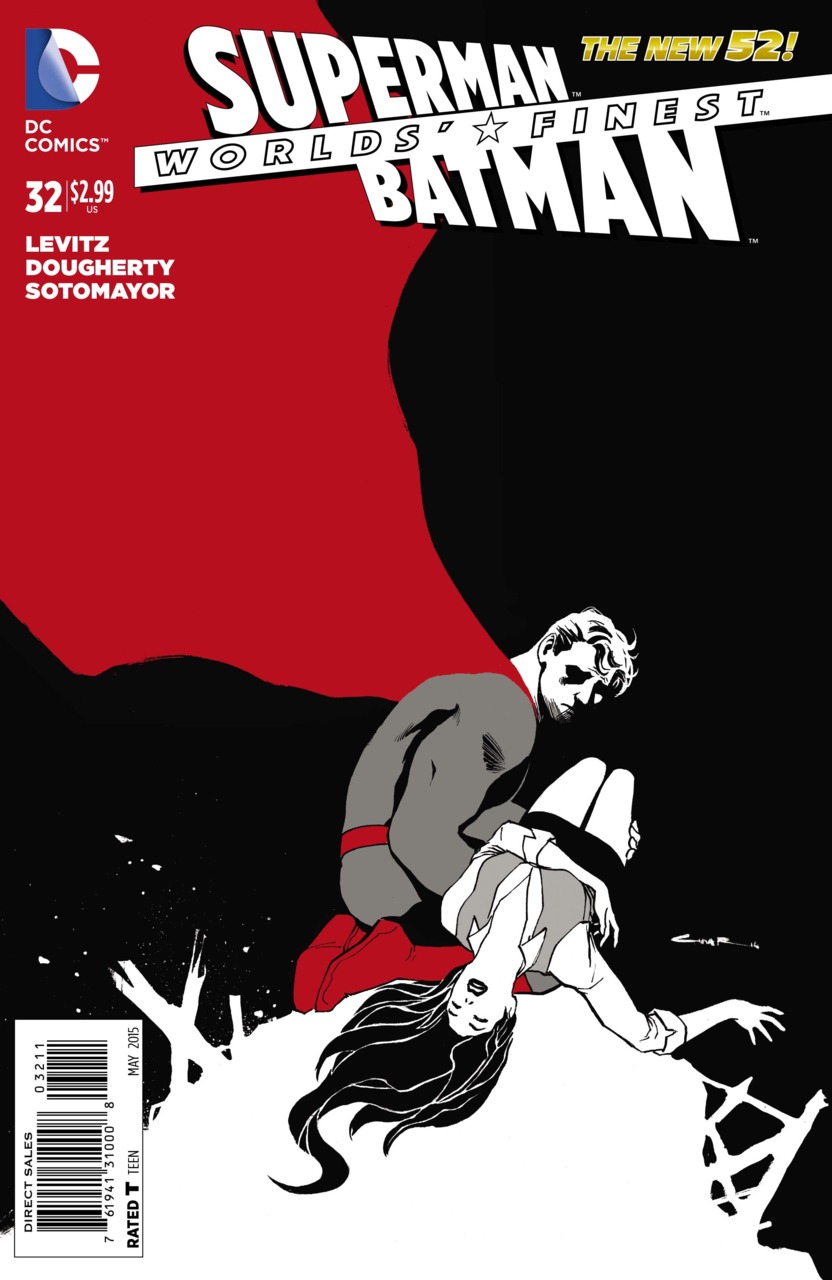 The final issue, issue #32 of World’s Finest begins with Lois recounting events as she puts it that she learned after she came back as Red Tornado. She admits that she could be making some parts of this tale up but she oddly states that reporters sometimes have to make parts of stories up to “connect things properly”. I do not know what to make of this statement. Is this a commentary of the writer to journalism like Batman’s snarky remark to Superman in “Throne of Atlantis” when he said that journalism is dead.

We open in the Batcave where Batman and Wonder Woman are forging a weapon. Batman and Wonder Woman discus the nature of their adversaries. They agree that they are neither gods nor human so based on the process of elimination, Batman surmises that they are Kryptonian. The sword that they are forging is made of Kryptonite since the substance had an effect on Superman, whom they know is Kryptonian. In the process of making the sword, the rest of the Kryptonite evaporated in the flames. Wonder Woman looks to hunt the enemy down while Batman surmises that they do not need to search for them, “they’re coming” for them.

We cut back to the Daily Planet where Lois sits down with Mr. Lustig, the witness of the satellite battle from the previous issue. She starts with getting some background information before going to the studio to tape her interview. Lustig seems interested to be on TV so that everyone can see him.

We return to the Batcave where Diana impatiently watches Bruce meditate. She wants to hunt Intri. Bruce states that Selina and Helena are in an undisclosed location to keep them safe. He also implies that they do not know the real reason for their undercover mission. Batman is ready to wait. Bruce hears a sound that Diana identifies as her blow in a fit of impatience. Bruce does not think so. Batman surmises that it is a Boom Tube. He and Diana move to the source of the sound and they are not surprised to find Intri firing on them. She is really there for Catwoman but she is willing to kill Wonder Woman and Batman instead. Diana engages Intri.

We cut to Lois screaming. We see a close up of Lustig with an omega sign in his eye. He is saying that Lois must die. He used a letter opener to stab Lois in the chest. He drops the opener as Lois whispers for Clark. Clark does hear her and immediately leaves to reach her side leaving Kara behind.

Back to the Batcave Diana’s sword is destroyed by Intri. She blasts Diana. Batman attacks with the Kryptonite sword. She swats Batman off but Diana sees that he did hurt Intri with the sword. She proposes that they attack Intri together. Together they inflict a mortal injury to Intri and as she dies the spirit of Mercury sweeps Batman and Wonder Woman away saying that “it is not fit for mortals to watch a god die.”   Intri does die.

Superman reaches Lois but it is too late she too is dead.

Epilogue One is the funeral for Lois which foreshadows the experiment that will transfer her memories and personality into the robotic Red Tornado. Epilogue Two reminds the readers of the deaths of Batman, Superman, and Wonder Woman during Steppenwolf’s first attack on Earth 2. Epilogue Three is the time Red Tornado wakes up and her joining the new Wonders to fight the second attack of Apokolips as chronicled in Earth 2: World’s End.

I did not like this issue as much as the prior issues. As I stated before, I knew the ending but I don’t think that this is the reason for my low opinion of this issue. I missed Selina and Helena. Catwoman was not a fool and she as seen in prior issues, was a very independent woman. I find it difficult to believe that Bruce could trick her to go into hiding.

I missed the family relationship as shown in prior issues. We get a little with Superman and Kara but it was more of a way to get Superman out of Metropolis so he would not be able to save Lois when she was attacked.

Who is Lustig, was he a human or was he Apokoliptian. He just disappears before Superman reaches the Daily Planet.

I did enjoy the fight with Diana and Batman versus Intri. It shows the planning of the two heroes not just two people duking it out with an adversary.

The art is a mixed bag for me as well. I do not like how Lois was drawn but I like that Diana is drawn as muscular as she is. It makes sense that the Amazon princess and warrior is as strong as she looks. I do not like the small mouth the artist gave Lois, especially as she is laying in the casket of Epilogue One.

My rating for this issue of Worlds’ Finest is based off a lack luster story and the issues I have with the art. I am disappointed to see this series end this way, I do not see this as a fitting send off for this otherwise very entertaining series.