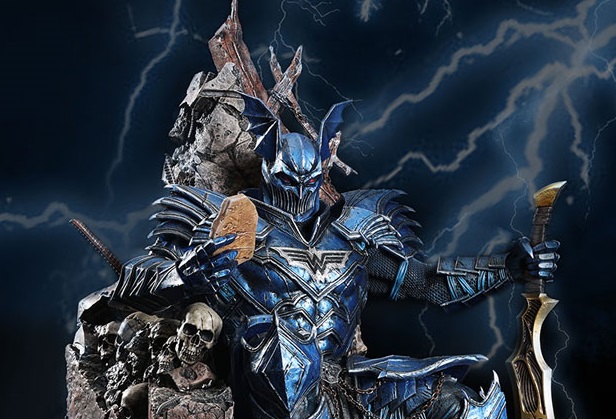 XM Studios has released details for their latest Dark Nights: Metal premium collectible statue, which features Merciless. The one-fourth scale statue measures about twenty-seven inches tall. There are two versions available with both versions including an additional head sculpt and right-arm switch-out. The second version, version B, is a red variant of the statue. Both versions of the statues are priced at around $1,100 and are only available to select countries in Asia. If you are located in one of the areas the statues are being made available, you can head over to XM Studios to preorder now.

“My whole life, I had been afraid of doing what I knew needed to be done. Afraid to give all of myself to the battle. The helmet showed me that my codes and rules were naive. That all that truly mattered was victory. And now I would finally take it for myself.”

The Merciless is depicted sitting atop his throne, a war god, a ruler, and one of The Dark Knights led by The Batman Who Laughs. The Batman from Earth -12, thinking that he lost Wonder Woman, the woman he loved at the hands of God of War, Ares, abandons his moral code. Devastated and enraged, consumed by vengeance, Bruce dons on Ares’ helmet, corrupting his mind, turning him into The Merciless.

In this art statue collectible, The Merciless an imposing iron-willed figure, sits on his throne, armed with the Godkiller sword. He can be seen ruminating over the portrait of Diana carved in stone, worn around the edges from the number of times he has looked upon this keepsake.

2 Head-sculpt and 2 right arm switch-out allows collectors to display The Merciless in all his imposing glory, clad in heavy battle-worn Ares’ helmet, or an unmasked Bruce, holding on to a keepsake portrait of his lover.