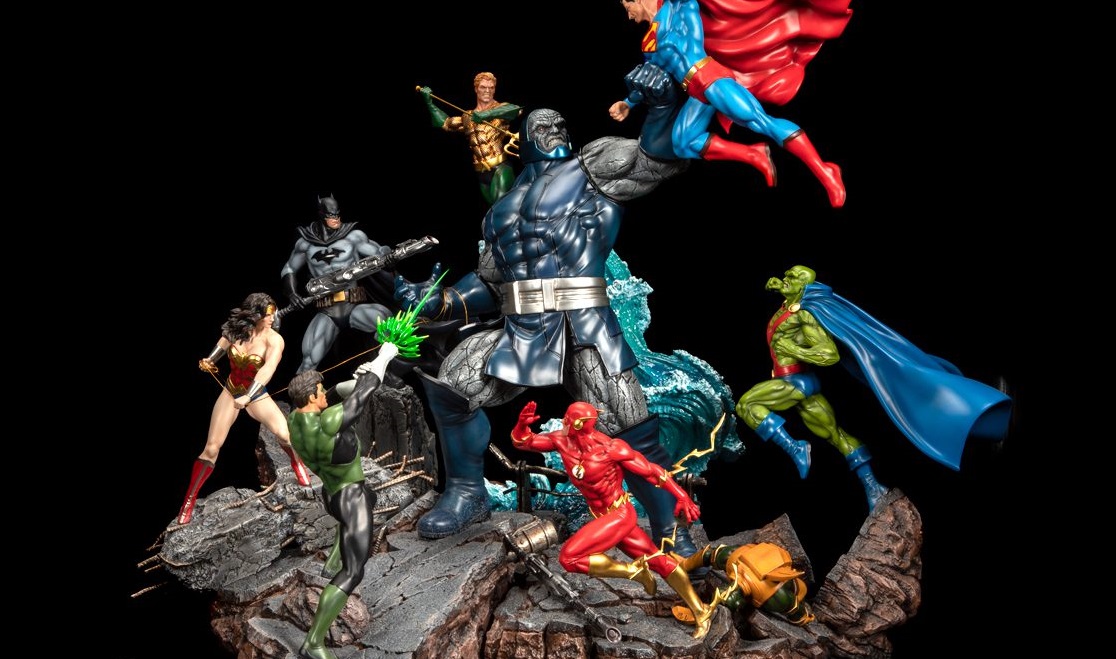 XM Studios has released photos and a few details for their latest 1:6 DC Epic Diorama Series, which features the Justice League and Darkseid in 1:6 scale cold-cast porcelain statue based on the concept art of Joycelyn Ong. There will be two versions available, both measuring in at just over thirty-one inches. The first version is a full-colored option, while the second is a faux bronze finish. There is not an expected ship date at the moment, but the color version will be available in a limited edition of 338 pieces and priced at around $2100. The bronze version is limited to only 168 pieces and priced at just under $2400. Follow the links to preorder directly from XM Studios.

XM Studios is excited to present our 1:6 DC EPIC DIORAMA series, Justice League VS Darkseid! An epic battle scene diorama all DC fans should have in their collection, Justice League comprising of Superman, Wonder Woman, Batman, The Flash, Aquaman, Green Lantern and Martian Manhunter engages in battle with one of Justice League’s main adversary and one of the most powerful beings in the DC Multiverse, Darkseid.

Inspiration and concept behind the Ver B Faux Bronze version: The team was inspired by bronze statues fraught with history, memorialized and displayed in piazzas and museums, and wanted to draw reference from this concept. This Justice League vs Darkseid diorama is not made of bronze but by painting in a faux bronze style, it immortalizes the scene as a moment in history. A history of the fight between good and evil, a fight between the Justice League and Darkseid.

Fun fact: The Statue of Liberty is made of copper and has turned into its famous green color due to oxidization over time. Bronze is made of 88% copper and thus also goes through oxidization which gives old bronze sculptures its greenish tinge/layer or coloration that the team has also reflected in the faux bronze paint application of this diorama statue.