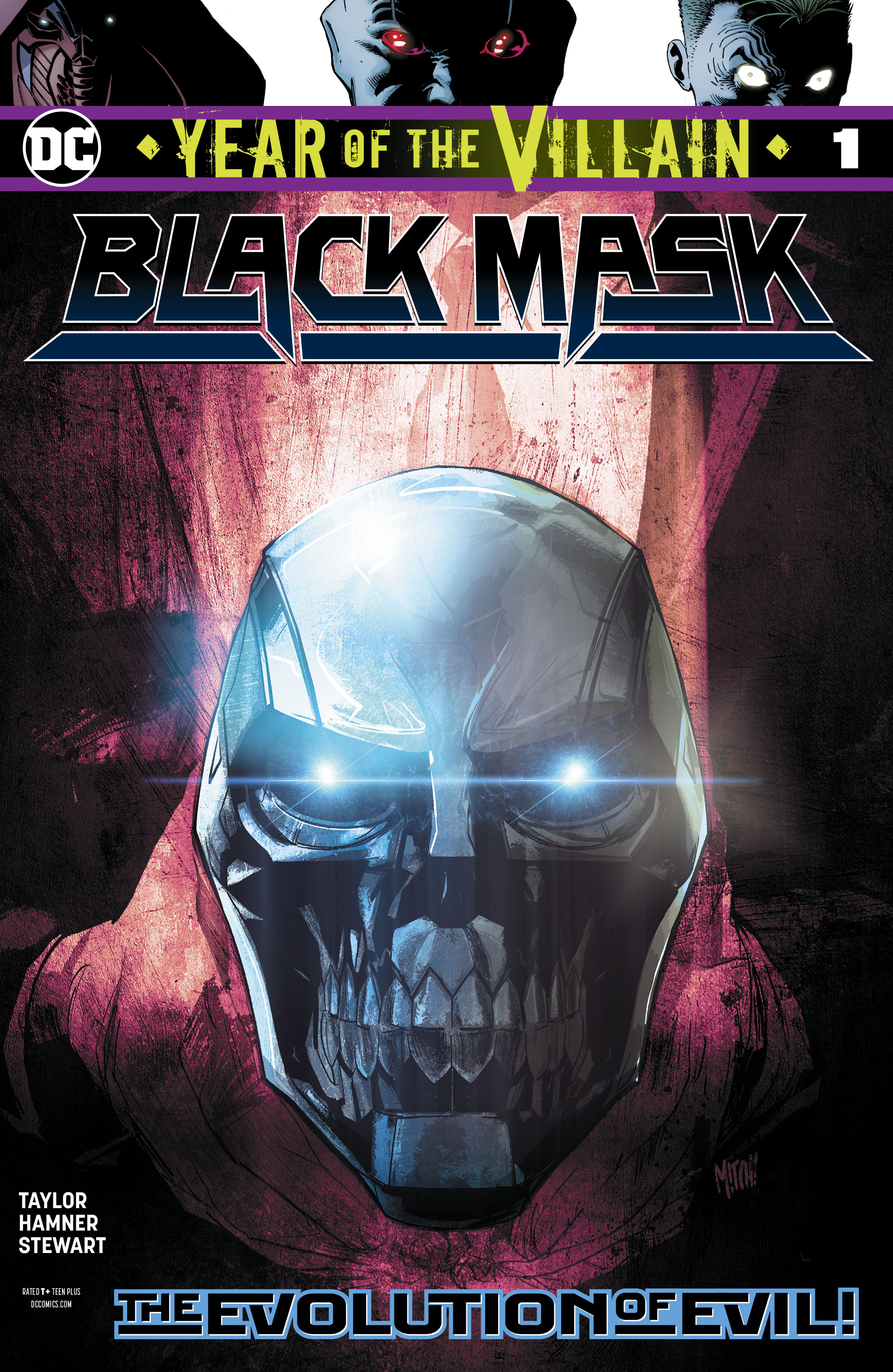 Synopsis (spoilers ahead): Then…Roman runs into the house and shows his mom a dinosaur head. She tells him she cannot look now because she is putting on her face. They are hosting the Waynes soon, and they must dress to impress. Although being wealthy due to their successful cosmetic business, they still were inferior to the Waynes. Roman was not ready and his father slapped him in his face. His mother ran to the boy’s side and angrily asked what was wrong with her husband. He should not have hit him in the face due to potential bruising. She ran to grab her makeup to cover up the bruises.

Roman wanted to be someone else. He wanted another face. He has one now that better suits him, but back then he did not. He met the Waynes, and his parents made him go play with Bruce. In Roman’s room, there are a bunch of masks on the wall and Bruce comments on the variety of masks. Roman asks if Bruce likes masks, and Bruce responds he never gave much attention to masks before. Bruce’s annoyingly happy face went away when his parents died, and that gave Roman an idea. Years later, he would burn his house to the ground with his parents inside. He was finally able to put on his real face.

Now…Black Mask has told this entire story to a hostage just because he is the last one remaining. And, he could just kill the guy, but having a dialogue is so much better. He asks the guy if he has any bright ideas because this situation has gotten a bit out of hand. He is surrounded and seemingly trapped. A drone flies in, and Luthor asks Black Mask if he wants a way to escape. He would do anything to not go back to prison, and Luthor uses his drone to create a massive distraction for Black Mask’s escape.

Luthor tells Black Mask he has an offer and asks what he wants. Black Mask tells him he wants Gotham back. He was worth $500 million dollars. He had power. Luthor laughs and says that is cute. He states that Black Mask is ruthless but not ambitious enough. Luthor says crime pays but not well enough. He suggests a hostile takeover of an old rival, Headberry Industries. Why settle for mayor when Black Mask can be the CEO of a massive multinational and own politicians and world leaders. In order to do so, Black Mask has to put on a different face. Will he accept Luthor’s offer?

In Atlanta, a delivery driver delivers a package and tells the person collecting it, CEO of Headberry Industries, to open it. There is a saw and other tools, and they will be used to cut off his fingers and take out his eyes. Black Mask assumes this man’s identity.

Elsewhere, Kate comes into her apartment after a long night of patrol with Renee waiting for her on her couch. Renee asks if Kate plans to stay in Atlanta, and Kate does not know how long she is going to stay, but being away from Batman’s eye is helpful.

Later that day, Renee alerts the CEO that there is an eminent threat, and they have to leave now. Batwoman arrives and starts to take out his security team, and Renee traps the CEO in the car. She knows Black Mask has some hold over him, and she wants to know everything that happened. She tells him he is safe now. He pulls out his gun and shoots her. Thankfully, Batwoman kicked him and he shot her in the arm. Batwoman makes sure Renee is fine, and Black Mask gets away.

Two months later…Black Mask knew he needed a new face and needed to become someone else. He arrived at a man’s house to deliver a package. He has found a new face that suits him better.

Analysis: What a fun issue! Taylor is one of my favorite writers right now. Black Mask is a B-level villain, and Taylor writes him like an A-lister.

I appreciate how Taylor actually read Tynion’s Detective Comics run and read that Batwoman has a reason to not be in Gotham. She is in Atlanta during this period after shooting Clayface. I know many writers who are commissioned to write a tie-in story for an event and just do their own thing, irrespective of continuity. I like how he picked up where Tynion left off.

The most shocking moment of this issue was when Black Mask’s mother said that his father should have known better to not hit Roman in the face when guests were arriving. Wow. What a messed up family!

Black Mask reminds me of Rorschach from Watchmen. Both are obsessed about their masks and believe their masks are their true face, and their normal faces are masks. If all of Batman’s villains reflect some trait of Batman’s, then Black Mask is the embodiment of Bruce dealing with the Batman persona. Bruce is his most self while being Batman. He is whole while wearing the cowl and empty while in a business suit. If one wears the cowl all the time and stare into the abyss, eventually you will fall in. Bruce is grounded to his family and friends and this helps him manage his darker side. Black Mask does not have this, thus his true face is utter evil.

Final Thoughts: Fun issue. It seems like this is a backdoor pilot to a new Batwoman series.