Review: Riddler: Year of the Villain #1 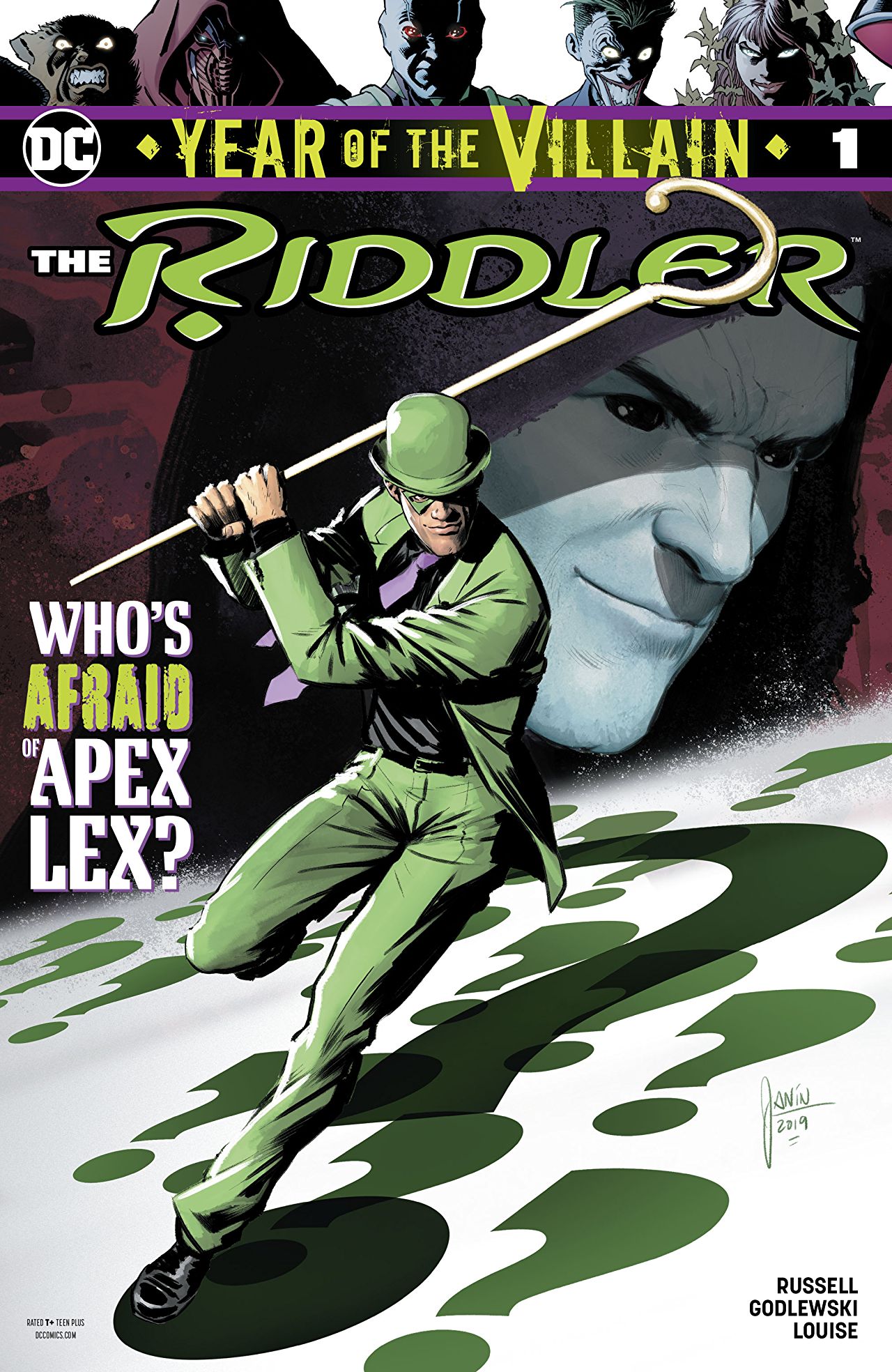 Overview: Riddler has a midlife crisis and has to question the choices he has made.

Synopsis (spoilers ahead): Set in the middle of the other Year of the Villain stories, Riddler is insulted over the fact that Lex hasn’t come to give him any gifts to help him defeat Batman. He spends his day grouching about it with fellow Riddle-making, King Tut, where Riddler contemplates his own cyclical lifestyle, and wonders if he should give it up. Riddler goes over the futility of their obsession and how while they work tirelessly to try and kill Batman, all Batman has to do is survive and to quote Riddler “How hard is that? I survive every day”. King Tut muses over his own last failure to defeat the Batman and Riddler leaves disappointed in his life.

Arriving at his own place of residence, Riddler finds Luthor waiting for him, but it’s not to give him anything. Lex reprimands the Riddler’s pride and assumed superiority. He calls him a child seeking a child’s dream. He lectures the Riddler about his stagnation in life. How he’s become complacent in life and lacking in any real ambition. He is more than happy to pursue a simple goal that he had when he was nothing more than a child. But Lex does not lord over Riddler’s failures. He points out that if Riddler is a failure then he too is one. He remarks on the futility of pursuing ego and pointless goals that ruin your life.

Lex begins to tell Riddler a parable about someone who spent his whole life building a tornado-proof shelter, only to be burned alive when his house caught on fire, trapped by his own shelter. He compares the man to Riddler and reveals he’s refused to help him because he doesn’t want him to be like the man in the parable. Killed by his own neglect for personal growth; blinded by ego.

The next day, Riddler calls King Tut to tell him about the visit, he grumbles about Lex’s visit and Tut says he’s going to help him instead. He lays out an idea for a 2-for-1 themed riddle involving the two combining their gimmicks into one super riddle. Riddler is hesitant but comes along after Tut prods him enough.

Setting up the trap, Riddle learns that Tut spent his late aunt’s life savings on getting live alligators and constructing this elaborate trap. Tut lies about a dirty bomb to get Batman there, which annoys Batman more than anything. We learn that no one at the police has any respect for Tut and Batman expects it to be over in thirty minutes. Tut puts Riddler in a Sarcophagus that has the controls to the secret double-trap. Riddler is concerned about getting inside it, but Tut makes it seem like its the only way to do the gimmick.

We get to then see Tut work. How he forces Batman through an elaborate death game that Batman easily walks through. Tut throws empty words that try to sound deep and reflective, and while all this is going on, we look back as see Riddler’s life before all this. We see him as a child accepting an award for being smart. Riddler tries to defend himself by saying he’s a respected villain, but the ghost of last night’s Luthor retorts with “better to be cursed by a wise man than applauded by fools.” We see him before he became a supervillain, working as a simple street grifter, conning fools out of their money without them ever learning the truth.

We flashforward to Batman fighting Tut. It’s so obviously a one-sided fight. Batman skates by everything Tut has planned for him, all while Tut continues to monologue about things that sound like they have meaning, but pose no genuine insight into Batman. Empty questions that are easy to ignore.

Meanwhile, the ghost of Lex continues to chide Riddler for latching onto his past, refusing to grow and become a better person as a result of it all. “Life is the process of saying goodbye to ourselves”. Riddler realizes the truth of it all. How pathetic his life has become, and leaves Tut to get his ass beaten by Batman. He leaves behind his costume, his gimmicks, and his failures, and steps forward to become whatever he will be in the future.

Analysis: This has been my absolute favorite comic released this year. Riddler has always been one of my favorite villains in Batman’s roster, and I wasn’t even assigned to read this comic. I stumbled on it, read it for the love of it, and basically begged to get the chance to review it afterward. The entire comic reminds me thematically of Detective Comics #822 when Riddler awakens from a coma and loses his criminal compulsions, turning over a new leaf and working to better his life. Of course, the actual contents of the two issues are vastly different, but Detective Riddler was one of my favorite depictions of the man, so I immediately fell in love with this comic.

Even of second viewing though, and for people who aren’t as in love with a very specific period of Riddler’s life like I am, the comic is a breathtaking introspective take on the futility of hanging onto failures. So many people build an identity over a single part of their life that never went anywhere. They become bitter and resentful, adamant they could be someone, but refusing to ever actually grow and learn from their mistakes. Because sometimes the mistake is the entire direction in life they chose.

Throughout this issue, Tut represents the life Riddler is currently living; a pathetic life, only respected by those who make the same mistakes. Who bolster and encourage your failures because it gives value to their own failures. Tut doesn’t actually respect Riddler. Riddler is just the most famous and successful of the “riddle-gimmick” villains. He’s a celebrity. Riddler’s lifestyle reinforces Tut’s own lifestyle. It allows for Tut to feel secure in his life because if Riddler is doing this, then the lifestyle itself can’t be wrong, he’s just not doing it right.

The comic also pokes fun at supervillains in general and the almost pathetic nature some writers try to give villains meaning. The constant monologuing that Tut makes are especially reminiscent of the monologuing that Joker does in Killing Joke, blaring semi-relevant rants over a loudspeaker while Batman fights his way through the barest of symbolic obstacles.

Tut has statues depicting random vigilantes that Batman has fought alongside and makes comments about Bruce disregarding the lives of those closest to him. Tut comments on the families and financial wellbeing of the minions Batman beats up for standing between him and the big bad. He paints his actions as these big, moral quandaries, but is revealed in the end to be this scrawny pathetic man, hiding with nothing but a microphone. His threats are worthless.

This is what Riddler is aspiring to be the best at. Sure if Lex had given Riddler the same resources that he gave people like Red Hood, Riddler could be the greatest villain Batman ever fought. But the greatest piece of garbage is still nothing more than trash.

Final Thoughts: This comic is so good it’s encouraged me to come out of my slump and start writing again. It’s so good. Honestly, this really is the best comic I’ve seen come out this year.